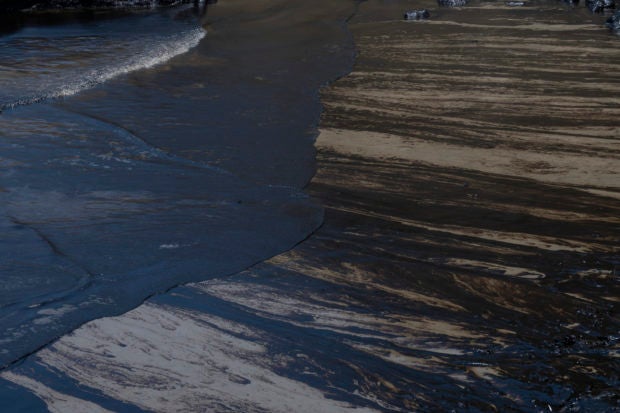 Oil wash ashore at a beach in the Peruvian province of Callao on January 17, 2022, after a spill which occurred during the unloading process of the Italian-flagged tanker “Mare Doricum” at La Pampilla refinery caused by the abnormal waves recorded after the volcanic eruption in Tonga. – A massive volcanic eruption in Tonga triggered tsunami waves around the Pacific, with waves strong enough to drown two women in Peru, more than 10,000 kilometres (6,000 miles) away. (Photo by Cris BOURONCLE / AFP)

LIMA — At least two kilometers of Peru’s central coast and two beaches were dirtied by oil spilled from a discharge ship rocked by waves caused by the eruption of a volcano in Tonga, Environment Minister Ruben Ramirez said on Monday.

The ministry supervised cleaning of the area in the coastal district of Ventanilla, where the spill happened on Sunday during unloading of crude oil from the ship to supply the La Pampilla refinery, owned by the Spanish company Repsol.

Earlier, the National Institute of Civil Defense (Indeci) and the emergency center of the Ministry of Energy and Mines said in a statement that high tides recorded in Ventanilla, as a result of the volcano’s eruption, had altered the process of unloading crude oil for the refinery.

“It is unfortunate. I am seeing that there is a serious impact on the coastal marine area. Initially two and a half kilometers (of damage) were reported, but now we see that it has affected two beaches,” Ramirez told reporters.

Indeci said it had the spill under control, although cleaning work continued. It did not say how much oil was spilled but the Agency for Environmental Assessment and Enforcement (OEFA) said it initiated an investigation to determine responsibility for the spill.

The Pampilla refinery said in a statement that “the violence of the waves” on Saturday due to the eruption of the volcano generated the “limited spill” of oil at a time when a ship was unloading.

An undersea volcano off Tonga erupted on Saturday, prompting tsunami warnings and evacuation orders in Japan and causing huge waves on several islands and regions in the South Pacific.