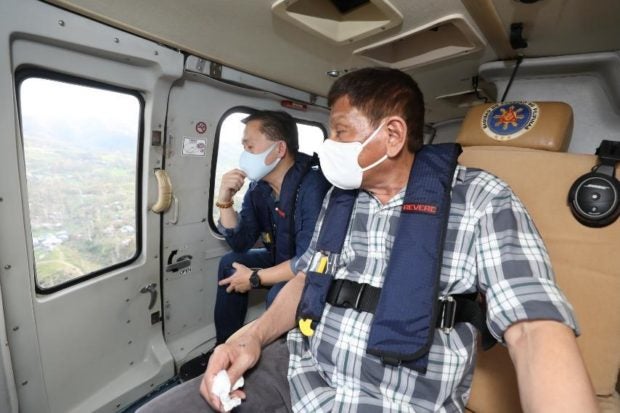 Photo from the Office of Senator Bong Go

MANILA, Philippines — President Rodrigo Duterte has directed government agencies to use its quick response funds (QRF) to help those affected by Typhoon Odette.

Senator Bong Go disclosed this Monday, adding that Duterte has requested an additional budget for government offices handling disaster response in order to quickly restore normalcy after the severe tropical storm barreled many parts of the Philippines last week.

Typhoon Odette, which international name is Rai, is said to be the strongest typhoon to hit the country this year.

(President Duterte has given additional directives to agencies such as the use of their Quick Response Funds; provision of housing assistance, including the provision of housing materials for repair of damaged houses; aid for the restoration of fishermen’s boats and other agricultural machinery; repair of destroyed buildings, bridges, airports, ports, and roads, among others.)

Aside from this, Go said Duterte has ordered the provision of community tents to serve as temporary evacuation centers; as well as additional food, water, and medicine for those affected by the typhoon.

(MARINA, Philippine Navy, Coast Guard, Army, Air Force, and other frontliners are ready to help in the rescue and recovery operations and ensure that relief items, equipment, and essential personnel will reach affected areas.)

(Available vessels have also been deployed to serve as floating hospitals in Dinagat Islands and Siargao Island. The DOH will send additional medicine, medical equipment, and health personnel to aid the evacuees.)

Further, Go said Duterte is set to visit Negros Occidental to personally check the situation in the province.

Duterte earlier assured those affected by Typhoon Odette that he is trying to look for funds for their aid, saying that government coffers have already been “immensely depleted” due to the COVID-19 pandemic.

READ: Duterte says looking for money for typhoon victims as funds ‘depleted’ due to COVID-19

The National Disaster Risk Reduction and Management Council (NDRRMC) reported that over 1.8 million people were affected by the storm.