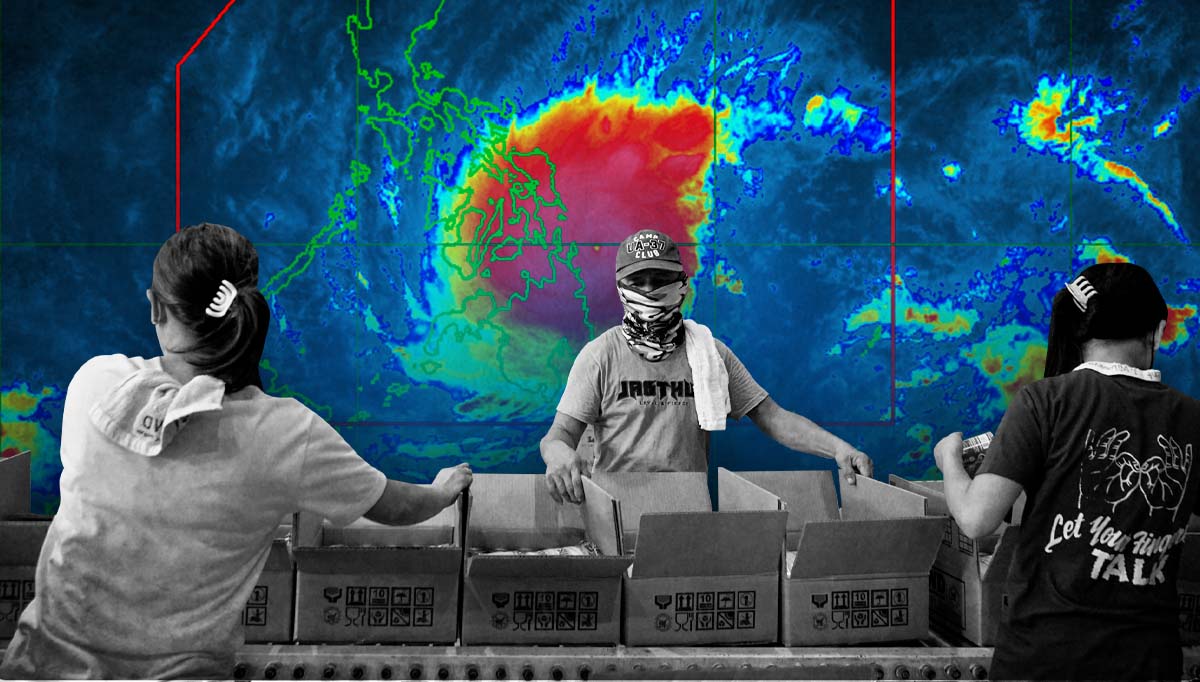 MANILA, Philippines—Two days ago, on Dec. 14, the Philippine Atmospheric, Geophysical and Astronomical Services Administration (Pagasa) announced that a  severe tropical storm, Rai, had entered Philippine area of responsibility (PAR) and was named Odette.

On Dec. 15, Odette had gained strength and became a typhoon. On Dec. 16, international weather monitors upgraded it to Category 5, the highest level. It made landfall also on Dec. 16.

READ: ‘Odette’ now a typhoon; Signal No. 2 in parts of Surigao

Pagasa forecast heavy to torrential rains in areas on Odette’s path and moderate to heavy rains elsewhere near the typhoon’s band.

Tropical cyclone wind signal (TCWS) number 3 has been raised in some areas within Visayas and Mindanao, while TCWS numbers 1 and 2 were issued in locations across the country.

Here are some fast facts about Typhoon Odette (Rai) and its projected impact on the possible affected areas:

Based on Pagasa’s 8 a.m. bulletin, Odette has maximum sustained winds of 165 kph near the center, gusts of up to 205 kph, and a central pressure of 90 hPa. Later reports by international weather stations said Odette, or Rai, carried winds of up to 230 kph.

According to Pagasa, the term gust refers to “a sudden, brief increase in the force of the wind.”

“It is of a more transient character than a squall and is followed by a lull or slackening in the wind speed. Most winds near the earth’s surface display alternate gusts and lulls,” the state weather bureau said.

The term “sustained wind,” according to the Hong Kong Observatory, refers to the average wind speed over a specific period. It stands as the basis for TCWS issued by weather bureaus.

Pagasa, on the same tropical cyclone bulletin, said Oddete was last observed moving West Northwest at a speed of 25 kph.

The National Disaster Risk Reduction and Management Council (NDRRMC) on Dec. 14 said over 10,000 villages are within the projected path of Odette. Mark Timbal, NDRRMC spokesperson, said these villages are mainly in the Visayas and Mindanao and some parts of Southern Luzon.

READ: NDRRMC says over 10,000 barangays may be affected by ‘Odette’

Timbal, in a televised briefing, said warnings had been issued to local governments in Northern Luzon, too, as their areas were also expected to experience heavy rains as a result of Odette (Rai). 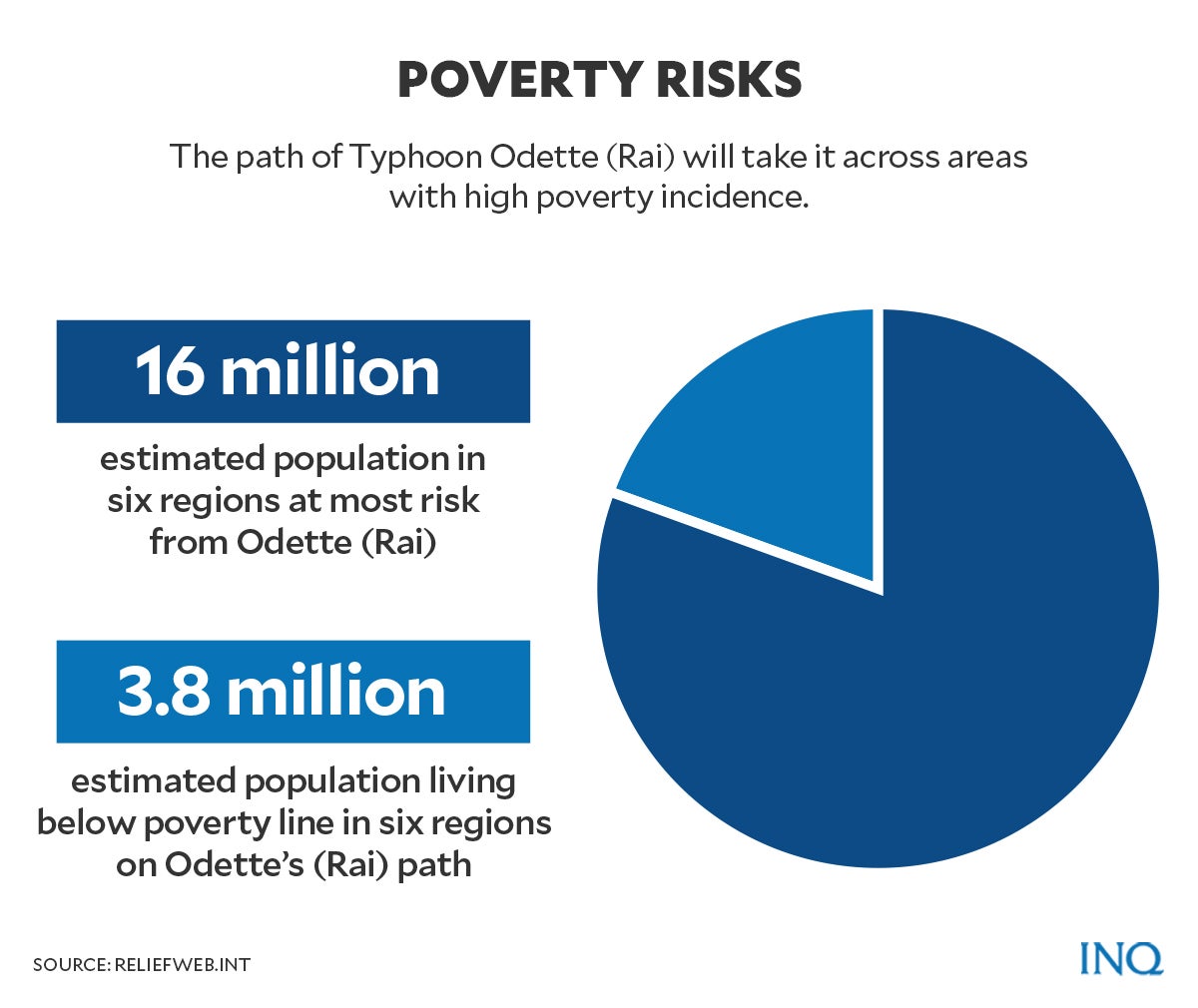 According to an estimate made by Reliefweb.net, a website under the UN Office for Coordination of Humanitarian Affairs (UN-OCHA), Odette’s path was running along areas with high poverty incidence.

Aside from typhoons’ impact on populations, the Department of Finance (DOF) said the Philippines has been suffering billions of pesos in financial loss and other damage as a result of climate change-related events. 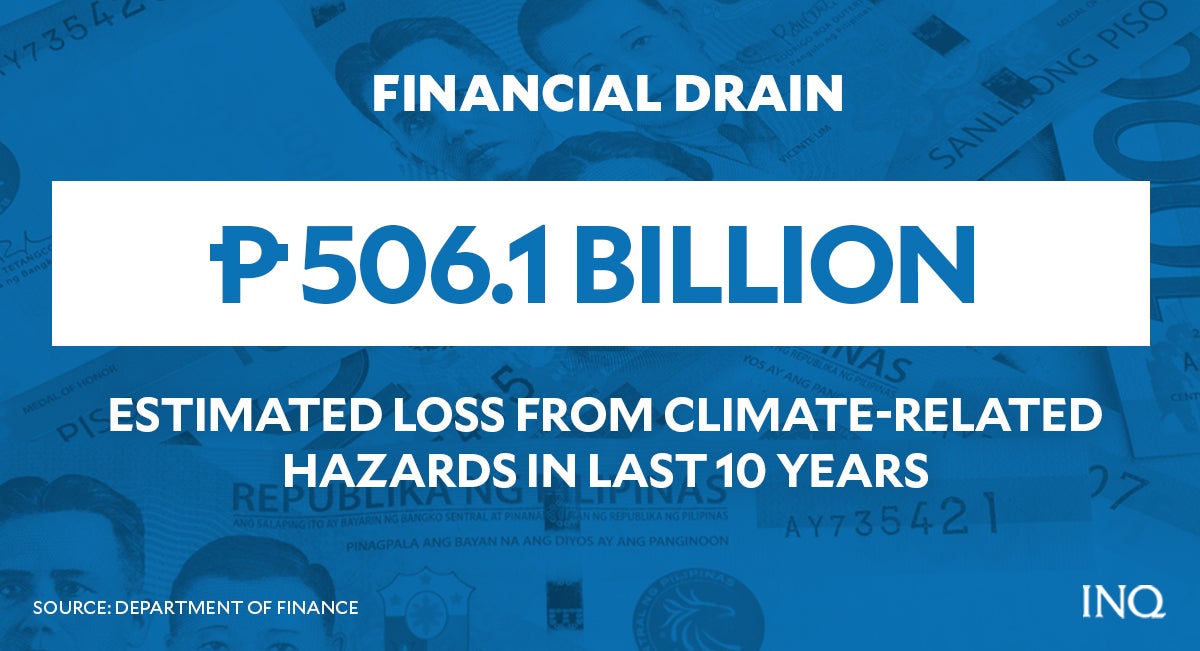 On Dec. 15, the NDRRMC issued and raised red alert status on its operation centers for monitoring and immediate disaster response. 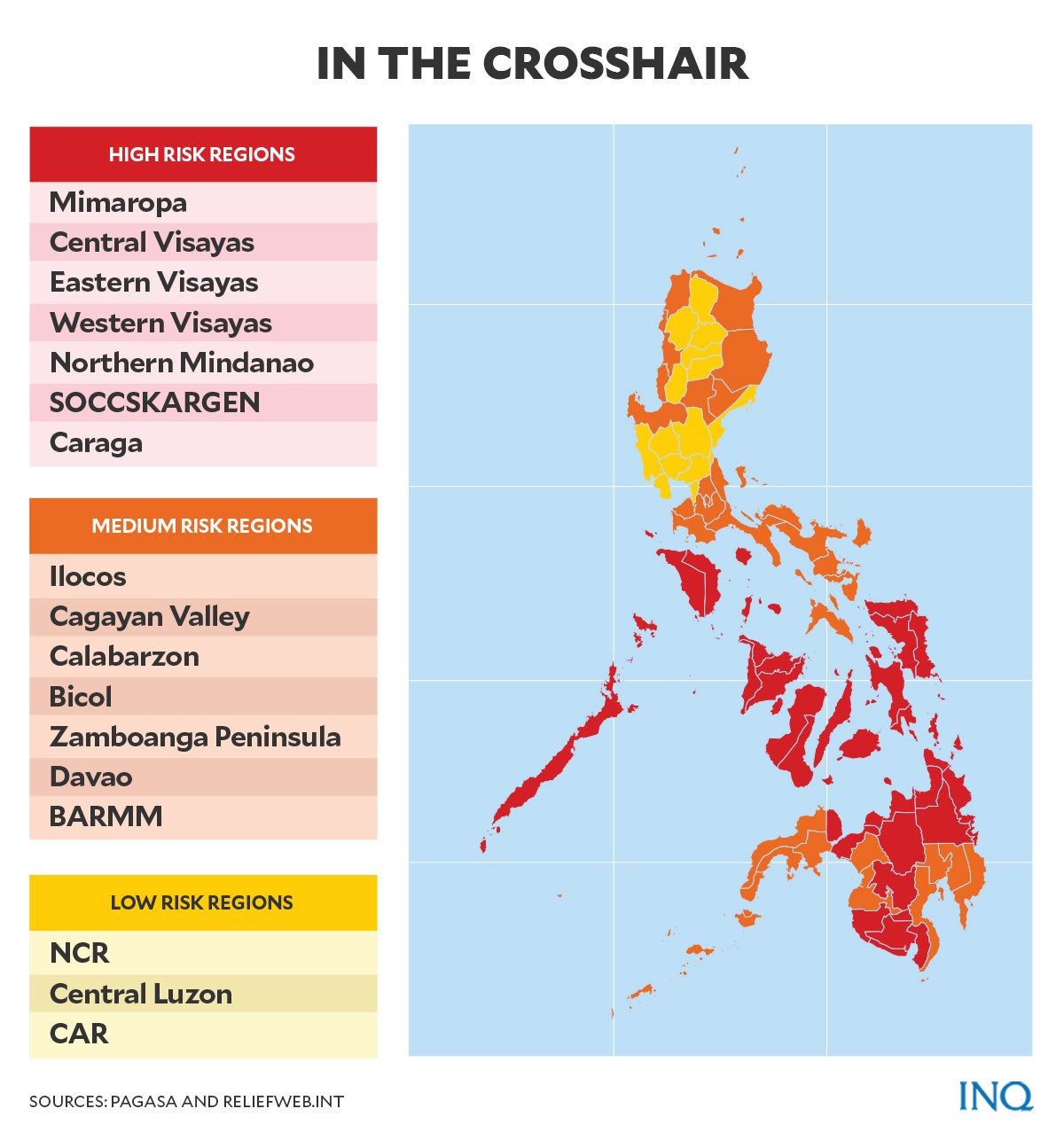 The OCD has placed these high-risk regions under Charlie Protocol, the highest emergency preparedness and response (EPR) level.

Seven regions were also identified as “medium risk” areas. These were:

These regions were placed under Bravo Protocol.

The National Captial Region (NCR), Cordillera Administrative Region (CAR), and Central Luzon were classified as “low risk” areas, and are under the Alpha Protocol.

According to Perez, the NDRRMC has activated the following response clusters to offer assistance in the affected regions:

The Central Visayas office of the Department of Social Welfare and Development has already prepared food packs and other items in anticipation of displacements to be caused by Odette (Rai). 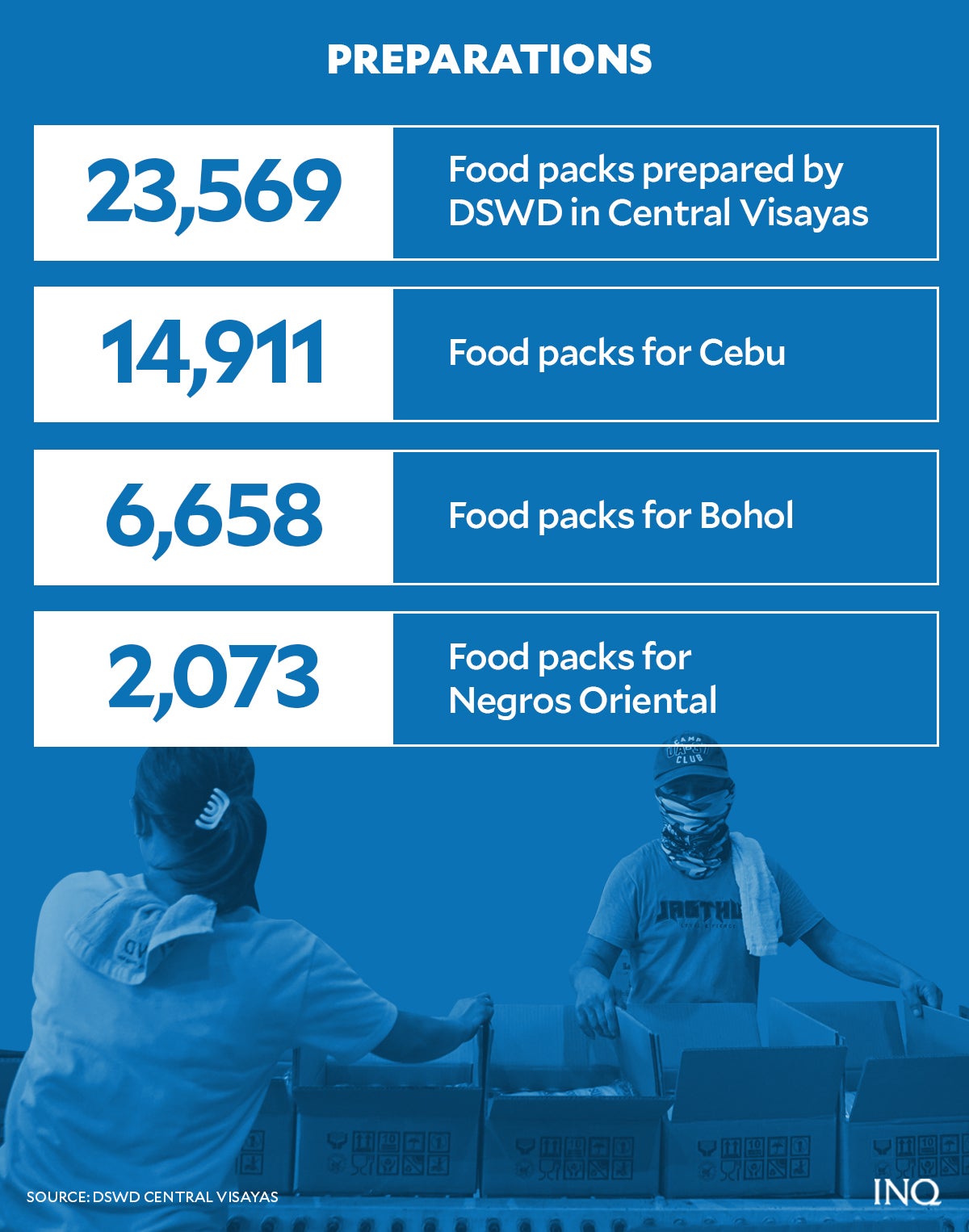 The OCD, in cooperation with the response cluster members and the NDRRMC, has also identified the total resources and assets allocated to areas that would be hard hit by Odette (Rai).

Among the response cluster assets listed by Perez during the briefing were:

The OCD, according to Perez, also has available prepositioned non-food items that were distributed to regions nationwide, including the seven “critical regions” under monitoring.

“For now, we still have ample supply of assistance of non-food items in our regional offices,” said Perez.

The OCD, in its office in Quezon City, has reserved non-food item stocks worth P75 million which it can augment in case needed by the typhoon-hit regions. These include: