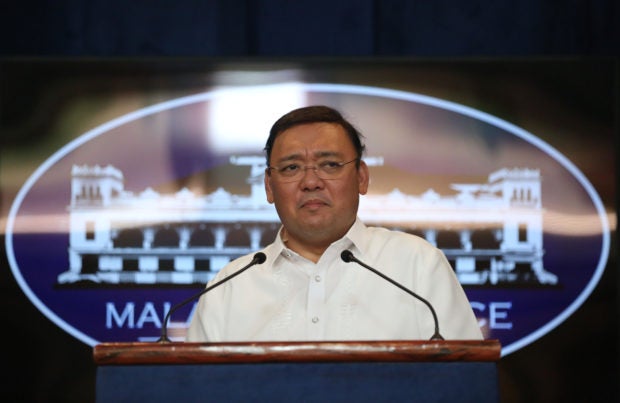 MANILA, Philippines — Presidential spokesperson Harry Roque on Tuesday insisted that President Rodrigo Duterte was not in any way involved in the alleged corruption plaguing the transactions of Pharmally Pharmaceutical Corp. with the government on the purchase of pandemic supplies.

He dismissed claims of “grand conspiracy” in the Pharmally transactions as mere gossip.

(Those are just rumors in this time of politics but if talking about evidence, there is none.)

Roque likewise ruled out any overpricing in the procurement of personal protective equipment (PPE) amid the COVID-19 pandemic.

(In fact, it is not proven that the president’s relations to the officials have something to do with the procurement of PPEs. Again, first of all, there is no overpricing in the purchase of PPE, according to the Commission on Audit chairman.)

(Second, the law was not violated because it was Congress that gave the Bayanihan I which allowed the president to buy PPEs and other necessities as soon as possible.)

(So, it is clear. So, if there is no violation of the law and overpricing, why would there be a grand conspiracy? It is a rumor from a person politicking.)

Roque’s remark was in response to Senator Richard Gordon who, in his opening speech upon the resumption of the Senate blue ribbon committee investigation on Tuesday, stated, “it is clear and categorical to us that this grand conspiracy could never have happened without the imprimatur of the President. The President allowed his friends to bleed this nation’s coffers dry.”

Roque then noted that Duterte never blocked Cabinet officials from attending Senate hearings, but only lamented that officials in the executive branch must devote more of their time to address the COVID-19 pandemic.

(The problem is, after many hearings — if I’m not mistaken, 12 hearings — it still goes on. What will happen amid the pandemic if the secretary of health, vaccine czar, and testing czar exhaust their time attending those hearings.)

But Duterte himself said he has issued a memo prohibiting members of the Cabinet from attending the Pharmally probe by Gordon’s panel. He earlier even ordered the police force not to arrest anyone who would ignore subpoenas from the Senate.

Despite having a paid-up capital of P625,000, Pharmally clinched multi-billion-peso deals from the government to supply the country with medical goods for its COVID-19 response.