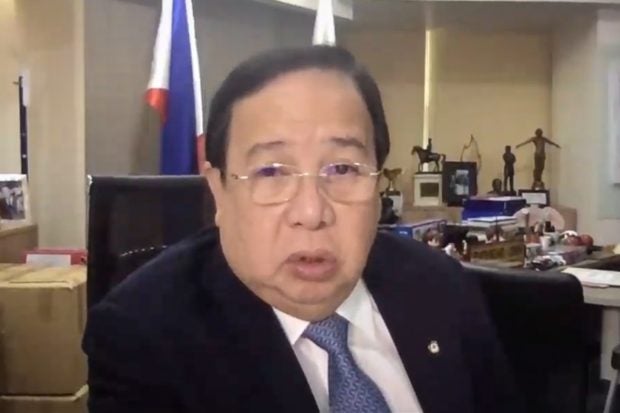 MANILA, Philippines — A “grand conspiracy” that “could never have happened without the “imprimatur of the executive, from beginning to end.”

This was how Senator Richard Gordon described the controversial transactions of the government with Pharmally Pharmaceutical Corp., which bagged multi-billion-peso contracts for the supply of pandemic-related goods.

At the resumption of the Senate blue ribbon committee probe into the government’s pandemic purchases on Tuesday, Gordon said in his opening speech that the investigation so far finds that there were “unwarranted benefits and advantage” given to Pharmally.

“It is clear and categorical to us that this grand conspiracy could never have happened without the imprimatur of the executive from beginning to end,” the senator said.

“From meetings with Pharmally to the appointments of selected people who are extremely [loyal] to him (President Rodrigo Duterte) is the basis for the appointment and not competence,” he added.

Gordon was referring to former Procurement Service-Department of Budget and Management (PS-DBM) officer-in-charge Christopher Lloyd Lao and former director Warren Liong, who were at the helm of the procurement body when the transactions were entered into.

Both Lao and Liong have denied irregularities in the deals the PS-DBM awarded to Pharmally.

(Based on our investigation, it is clear that there were ‘unwarranted benefits, advantages or preferences, or favoritism’ given to Pharmally with a paid-up capital of only P625,000 but was awarded up to P11 billion, they are a small corporation with no experience.)

(Pharmally had no experience in bidding for government contracts… The PS-DBM, under Usec. Lao awarded ‘manifestly and grossly disadvantageous to the government’… The Filipino people are suffering because of this violation of the Anti-Graft and Corrupt Practices Act.)

He then vowed to continue investigating the matter despite what many see as attempts to restrict the ongoing probe.

(That is hearsay…but when it comes to the evidence, there is no evidence that would prove that.)

(It was not even proven that the President was involved in the procurement of PPEs.)

During the course of the inquiry, senators have repeatedly questioned the Department of Health’s transfer of P42 billion PS-DBM for the procurement of pandemic response supplies in 2020.

A portion of this amount went to over P8.6 billion worth of contracts awarded to Pharmally last year. Senators doubted the financial capacity of the firm since it was only established in 2019 with a small capital of P625,000 when it secured the supply deals.

Pharmally chairman and president Huang Tzu Yen, for his part, previously denied that they were favored in any way in the government’s procurement of medical supplies, saying the small company has been “unfairly prejudged.”