Colmenares: Talks with presidential bets needed to justify our choice 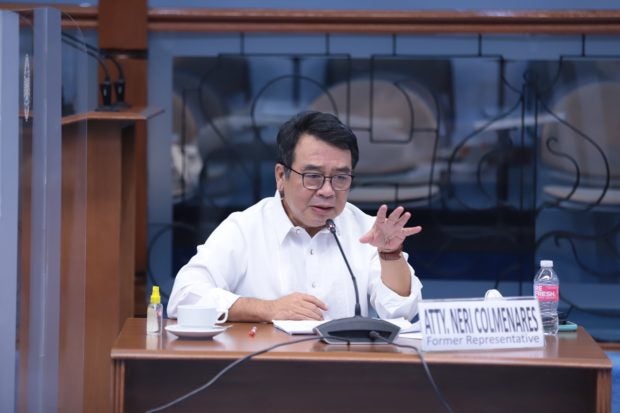 MANILA, Philippines — Makabayan coalition wants to speak with presidential candidates first so they can explain to its constituents why a particular candidate deserves its vote, aspiring senator and former Bayan Muna Rep. Neri Colmenares said.

Colmenares said this in an interview with ABS-CBN News Channel’s Dateline on Monday, as many of Vice President Leni Robredo’s allies are wondering why the Makabayan has not thrown its support behind her presidential candidacy in the 2022 national elections.

According to the former lawmaker, Makabayan is a very platform-focused organization, and that their constituents and members from across the country are seeking answers too.

Colmenares also assured Robredo’s supporters and other candidates that they would not impose Makabayan’s beliefs.  But they also noted that they should be able to explain why they made such a choice.

“We’re not saying that we are going to impose on any candidate that they fulfill or at least agree with all of the platforms of Makabayan.  We know how to meet people halfway,” he explained.

“But what we’re saying we just wanted to be clear on what is the minimum, at least, that we can agree on so that we can go back to our constituents and really fire them up to campaign for this specific candidate,” he added.

Colmenares, though in talks with Robredo, was notably missing from the Vice President’s senatorial slate.  However, a 12th spot remains open, and Robredo said that Colmenares is one of the candidates being considered.

While Colmenares stressed that he respects Robredo’s decision, the non-inclusion of the activist was a hot topic over the weekend, dividing some of the Vice President’s supporters.

Earlier, former senator Antonio Trillanes IV, a former soldier who is running for senator under Robredo’s slate, admitted earlier that he was against Colmenares’ inclusion as he claimed that the Makabayan has a habit of prioritizing its own welfare over what would be good for the country.

Trillanes pointed out in a Facebook post that the left actually supported President Rodrigo Duterte in the 2016 elections — even if the Makabayan including Colmenares has criticized the administration for the most part.

Aside from that, the former senator also claimed that none of the 1Sambayan conveners from the Makabayan voted for Robredo during the internal deliberations, saying that they chose Manila Mayor Isko Moreno instead.

For Colmenares, he admitted that they talked with Moreno and Senator Manny Pacquiao — both presidential candidates in the upcoming polls — but that was before Robredo even announced her candidacy.

Robredo’s decision to run for president was made late — just on October 7 — as she was mulling whether aiming for the country’s highest post would help avoid another Duterte-style of government and prevent the Marcoses’ return to power.

“Yes we discussed already with Mayor Isko and Manny Pacquiao their particular platforms […] So I guess in the end it’s just VP Leni and we’re happy that VP Leni said that the 12th slate is still something they’re considering with Neri as part of the possible consideration, and secondly the acceptance that yes indeed, there is a need to discuss the platform,” Colmenares said.

“In the first place, when we discussed with Senator Manny and Mayor Isko, that was long before October, at the time when Vice President Leni was saying she will not run.  So that’s the time,” he added.

Asked what is keeping them from totally supporting Robredo despite being the obvious opposition candidate, Colmenares said that while her programs like the COVID-19 response are sound policies, there are “finer details” that they need to understand.

“We think there would be some unities with her.  We just want to sit down with her and discuss with her (issues) personally also: for example, is she against contractualization?  What does she mean by that, is she against endo?  Is she for land reform?  What concept of land reform?  For us these are very crucial,” he explained.

“It’s clear that she has a different response from President Duterte’s incompetent and inefficient COVID-19 response […]  But you see there are also finer details in a COVID-19 response, is it going to be fueled by loans and debts like Duterte is doing?  Is it vaccine-centered or does it also focus on mass testing? So these are the things that need to be very clear,” he added.

READ: Colmenares in talks for spot in Robredo’s Senate slate