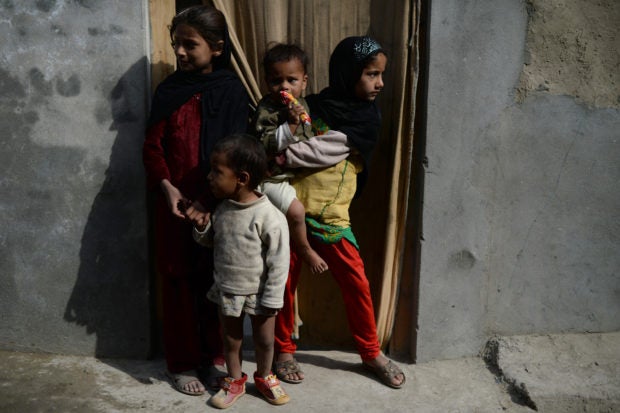 fghan children stand on the door steep on the house and look at health workers a polio vaccination in Jalalabad,Nangarhar province. AFP FILE PHOTO

KABUL — Health workers in Afghanistan will
begin a house-to-house polio vaccination drive next month after
the new Taliban government agreed to support the campaign, the
World Health Organization and the United Nations children’s
agency Unicef said on Monday.

Afghanistan and neighboring Pakistan are the last countries
in the world with endemic polio, an incurable and highly
infectious disease transmitted through sewage that can cause
crippling paralysis in young children.

Polio has been virtually eliminated globally through a
decades-long inoculation drive. But insecurity, inaccessible
terrain, mass displacement and suspicion of outside interference
have hampered mass vaccination in Afghanistan and some areas of
Pakistan.

The campaign due to start on Nov. 8 will be the first in
more than three years aimed at all children in Afghanistan,
including more than 3 million in remote and previously
inaccessible areas.

“This decision will allow us to make a giant stride in the
efforts to eradicate polio,” Hervé Ludovic De Lys, Unicef
Representative in Afghanistan, said in a statement.

“To eliminate polio completely, every child in every
household across Afghanistan must be vaccinated, and with our
partners, this is what we are setting out to do,” he said.

A second campaign, due to begin in coordination with a
campaign in Pakistan in December, has also been agreed.

According to figures compiled before the collapse of the
Western-backed government in August, there was one reported case
of the one wild poliovirus type 1 (WPV1) in Afghanistan in 2021,
compared with 56 in 2020.

However until the disease is eliminated completely, it
remains a threat to human health in all countries, especially
those with vulnerable health systems because of the risk of
importing the disease.