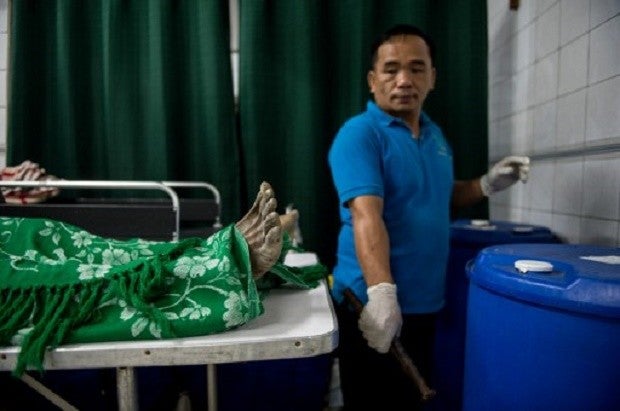 MANILA, Philippines — The Philippine National Police (PNP) is now reviewing the memorandum of agreement (MOA) crafted by the Department of Justice (DOJ) for their joint investigations on drug war-related deaths.

On Monday, PNP chief Gen. Guillermo Eleazar said that they received the MOA last Friday, as Justice Secretary Menardo Guevarra said, which contains how the police and the National Bureau of Investigation (NBI) may conduct joint investigations.

The investigation aims to determine whether law enforcers abused their power in implementing the administration war against illegal drugs, as several incidents of “nanlaban” or suspects fighting officers during the arrest process.

(The review of the draft MOA is being done and after this, we would formalize and sign this agreement so that we can start the assessment and case build-up against officers who abused the government’s aggressive anti-drug campaign in the past five years.)

“This serves as an assurance to our kababayan that we are serious in our commitment to ferret out the truth on the questionable cases, to hold accountable those who committed abuses and to institutionalize reforms to further professionalize your PNP,” he added.

On Sunday, Guevarra confirmed that Justice Undersecretary Adrian Sugay already submitted the draft NBI-PNP MOA last Friday. Both agencies would be given some time to possibly “beef up the MOA” by including “operational matters as they may deem necessary”.

The MOA came after DOJ said it had already finished assessing 52 cases where drug suspects who died allegedly fought it out against police officers conducting the drug war.

Eleazar said that the PNP’s openness to investigation is part of the organization’s commitment to transparency and accountability. The police force has been at the receiving end of many allegations regarding human rights abuses and extrajudicial killings (EJKs).

“In partnership with the NBI, itatama natin ang mali at papanagutin natin ang nagkamali in the interest of truth and justice,” he said.

(In partnership with the NBI, we would correct the ills and hold those who erred accountable in the interest of truth and justice.)

While President Rodrigo Duterte has enjoyed widespread support, he and his administration have often been criticized for the drug war, which claimed more than 6,100 lives.

Duterte is facing a crime against humanity complaint before the International Criminal Court for his role in the drug war.

There are many “nanlaban” cases that human rights activists and other progressive groups deem to be an example of EJK, but Duterte maintained that these could not be equivalent to EJKs because they happened during legitimate police operations.

But just this March, the Commission on Human Rights said that there were instances where drug war enforcers came launched operations with the “intent to kill.”

As of now, only one set of police officers have been convicted for their role in a drug war death — that of minor Kian delos Santos, which was a legitimate police operation in Caloocan.

However, closed-circuit television camera footage showed that delos Santos — who was not the original target of the operation — was dragged into a dark alley before being shot point-blank.