COC filing week: The old, the new, and the future 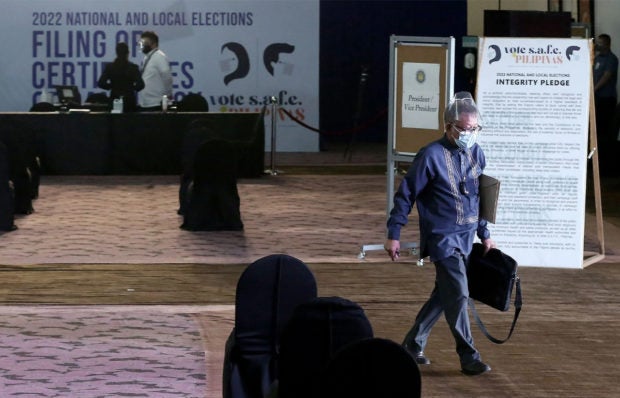 The Commission on Elections’ tent at the Sofitel hotel in Pasay City. INQUIRER file photo / RICHARD A. REYES

MANILA, Philippines—The filing of certificates of candidacy (COC) and certificates of nomination and acceptance (CONA) for the 2022 national elections have just concluded.

This year, the process went through major changes because of the COVID-19 pandemic. There was no shortage of surprises and shock announcements, though.

Here is a summary of the changes made, the old and new faces gunning for the country’s top positions, and what’s to come as we move closer to the much-awaited election period.

The COVID-19 pandemic has made a huge impact not only on the voter registration process but also on the filing of COC and CONA by aspirants who have set their sights on 18,180 national and local seats that are up for grabs.

Due to COVID-19, the Commission on Elections (Comelec) has issued rules of conduct for the COC and CONA filing—reversing some guidelines that were previously implemented for the 2016 national and local elections.

Despite the changes, some rules were retained in Comelec Resolution No. 10717, including: 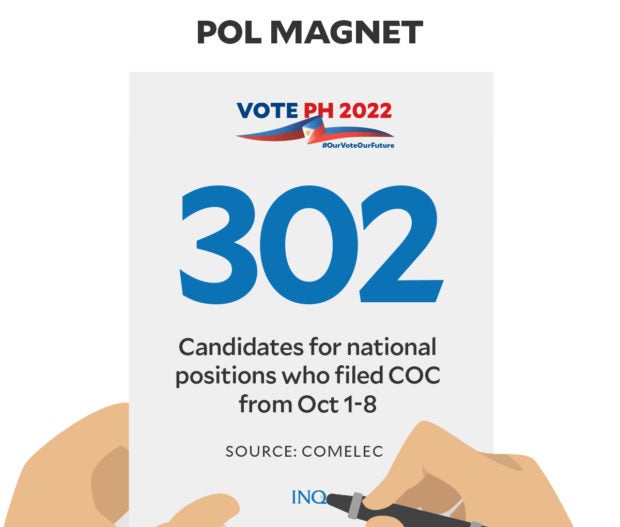 Some adjustments were inserted in the guidelines, including:

The usual overcrowding during the COC and CONA filing was also prohibited to avoid the risk of COVID infections. 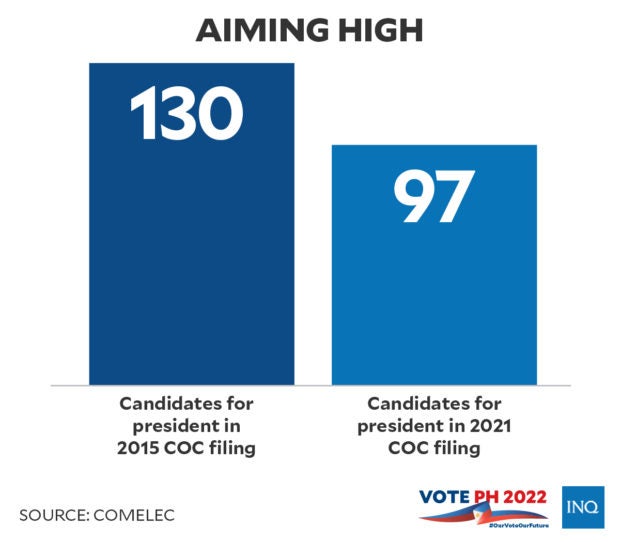 The poll body has implemented the following rules to ensure limited and controlled crowd in the venue:

Comelec has also decided to change the venue for COC and CONA filing from its Manila headquarters to a spacious tent set up on open grounds outside Sofitel Philippine Plaza in Pasay City.

It was not only the rules that changes this year. Fewer aspirants have filed their COC, compared to the total 321 individuals who filed in 2015. 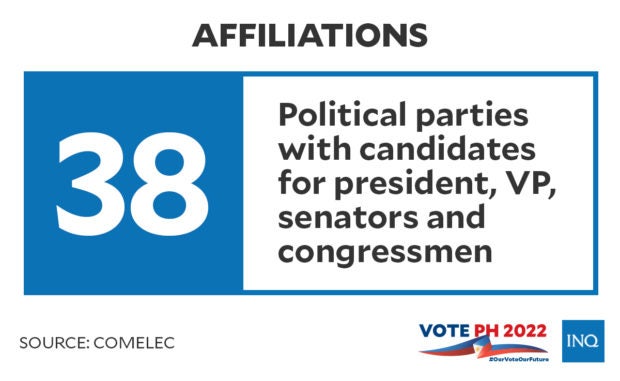 From Oct. 1 to 8 this year, a total of 302 aspirants went to the Pasay City venue to file their COC for president, vice president, and senator.

During this filing period, at least 38 political parties had their own candidates for president, vice president, senator, and congressman.

Still, most of the aspirants were independent candidates.

At least 85 of 176 senatorial aspirants also identified themselves as independents. 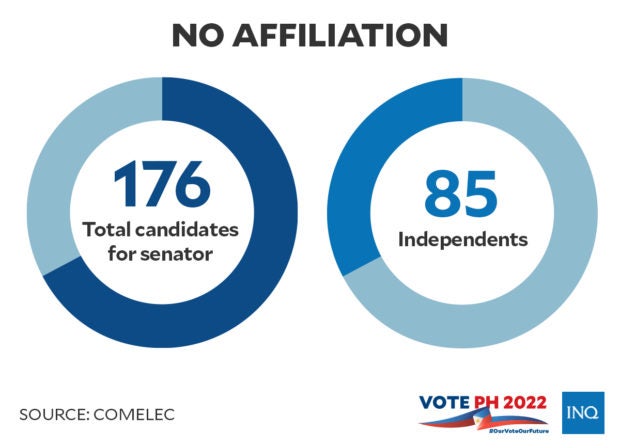 The Philippine Green Republican Party (PGRP) had the most candidates for the top three government positions. The party had two candidates each for president and vice president while it had 16 senatorial candidates.

The party was recently compared to PDP-Laban for having factions, each with their own candidates for president and vice president under a single party.

In an article posted in March 2007, the Philippine Center for Investigative Journalism (PCIJ) detailed the discrepancies in the information provided by Felix Cabrera Cantal, or Kuya Peck — PGRP’s then-lone senatorial candidate—who was declared a nuisance by Comelec.

The Maharlika People’s Party had the second most candidates, with 11 running for senator.

The PDP-Laban’s Cusi faction and the Katipunan ng Demokratikong Pilipino (KDP) both had a total of 10 candidates each under their banners.

Liberal Party (LP), which is one of the biggest and most prominent political parties in the country, only had one official candidate in 2022.

Despite the restrictions, this year’s COC filing was still packed with twists and surprises.

On the second day of COC filing, President Rodrigo Duterte — who previously accepted the nomination of the Cusi wing of PDP-Laban as vice-presidential candidate — announced he was withdrawing the acceptance.

In a surprising turn of events, Duterte told the public that he will retire from politics, adhering to the “overwhelming sentiment of Filipinos.”

“I’d like to address myself to the entire nation. The universal sentiment of the Filipino has been reflected in the different surveys and in many forums and, well, caucuses and meetings to discuss what I should do in my life,” Duterte said after Sen. Christopher “Bong” Go filed his certificate of candidacy (COC) for vice president.

On Oct. 5, as Marcos Jr. filed his COC for president, several people within the vicinity of the Comelec venue simultaneously received emergency alert SMS. 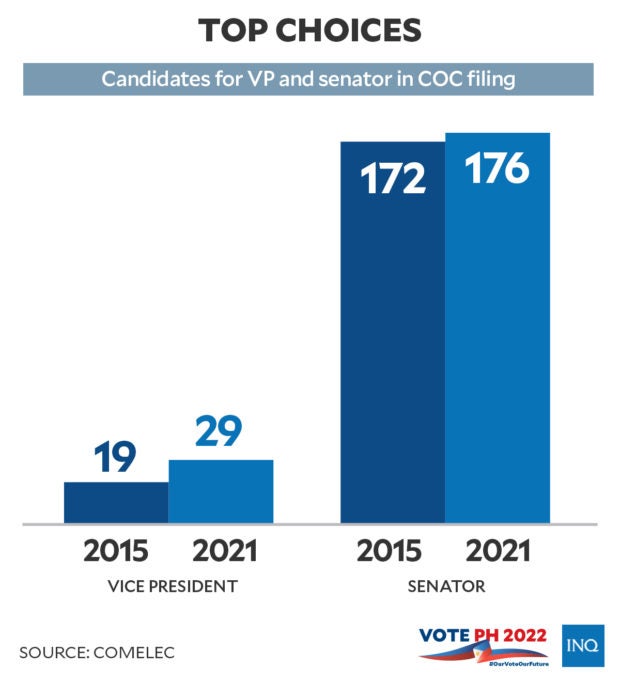 However, instead of an alert for an earthquake, storm, or volcanic eruption, the message tagged as a “severe” emergency alert included words that follow the acronym BBM, which is widely used to identify the late dictator’s son.

The National Telecommunications Commission (NTC) said it will investigate the issue. The sender remained unidentified and the Marcos camp has denied links to the alert.

Vice President Leni Robredo, who defeated Marcos Jr. in 2016, also pulled off a surprise when she finally declared her 2022 presidential bid.

After being mum on her political plans for months, Robredo last Oct. 7 appeared to the public and filed her COC in Pasay City.

Robredo, who was seen wearing a distinctive pink ribbon — which is also an international symbol of breast cancer awareness — also announced that she will run as an independent candidate.

Although she will not run as a candidate of the Liberal Party (LP), her spokesperson Barry Gutierrez explained that she will remain as the LP chair.

The next day, when she officially announced that she would run alongside Sen. Francis “Kiko” Pangilinan, Robredo was donning a pink top — which left many wondering whether it will be her new color in the campaign.

According to her, the color was not part of a planned event and was picked by volunteers who have urged her to run. She also clarified that they did not plan for a color motif.

Following her announcement, social media saw a wave in posts using pink undertones or highlights, in support of her decision.

On the last day of filing of COC, the ruling party made a surprise move by sending Sen. Ronald “Bato” dela Rosa as the Cusi faction’s standard-bearer in the 2022 elections.

Other prominent names have also filed their COC last week.

Some senatorial candidates, were, meanwhile hoping for another term in office while some are gunning for a comeback in Senate.

Among the familiar names who will be vying for 12 seats in the Senate included:

Also included in the familiar senatorial aspirant list were:

The following popular personalities have also logged their COC:

Although the period for the filing of COC and CONA has lapsed, the surprises for next year’s polls might be far from over as substitution or withdrawal of candidacy is still possible.

According to Section 40 of Comelec Resolution No. 10717, an aspirant or candidate who has filed a COC can still be substituted by another candidate under the same political party or coalition.

“The substitute of an aspirant who died, withdrew his candidacy, or was disqualified may file a COC for the Office affected on or before November 15, 2021 (Monday) so that the name of the substitute will be reflected on the official ballots,” the poll body added.

In 2015, Duterte — who had previously said he will not run for president — filed his COC for president and replaced Martin Diño, who was initially the standard-bearer of PDP-Laban for the 2016 elections.

Diño withdrew his COC to run for mayor of Pasay City.

Amid issues on the legality of Duterte’s substitution move, Comelec accepted his COC in a 6-1 vote.

This year, some people are speculating that the presidential daughter and Davao City Mayor Sara Duterte might replace Dela Rosa as the standard-bearer of PDP-Laban.

When asked by the media if this is possible, Dela Rosa said “everything is possible.”

“I will not say anything final. Everything is possible. As long as the process of substitution is legal, I think it should not be questioned. Anything can happen,” the senator said.

“As I have said, it is hard to pretend but we are still awaiting the final decision. If Inday Sara wants to run for president, I am open and willing to give way to her,” he added.

READ: Will Sara Duterte be a substitute candidate? ‘Everything is possible,’ says Bato

The Davao City mayor, on the other hand, has repeatedly rejected calls for her to run for president.

On Oct. 2, she filed her COC for reelection.

“I have been honored with the gift of trust and respect of many of our fellow Filipinos. Thank you to everyone who have expressed their support. Many of you do not know me and yet you carry me over your shoulders,” Sara said in the post.

“Like the other millions of Filipinos, I share with you the same goal of living a peaceful and prosperous life in our country, today and in the many years to come. I call on everyone to work together for an honest, orderly, and credible elections in May 2022,” she added.