MANILA, Philippines — Sen. Christopher “Bong” Go filed on Saturday his certificate of candidacy for vice president in the 2022 elections as President Rodrigo Duterte had decided to withdraw his acceptance of his nomination to run under the Partido Demokratiko ng Pilipino-Lakas ng Bayan (PDP-Laban) faction of Energy Secretary Alfonso Cusi.

Go arrived with Duterte at 3:25 p.m. at the Harbor Garden Tent of the Sofitel hotel in Pasay City to file his COC.

Before serving as a senator in 2019, Go was a special assistant to Duterte with jurisdiction over the Presidential Management Staff (PMS).

Prior to that, he was a long-time aide of Duterte when the latter was still mayor of Davao City. 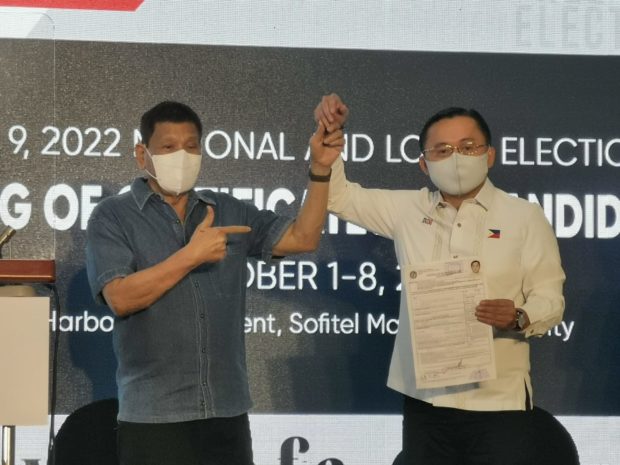 Earlier, Go was nominated by Cusi’s PDP-Laban wing as its presidential nominee, alongside Duterte, who accepted his nomination for vice president.

Go said, however, that he was not interested in running for president.

“Given that President Rodrigo Duterte decided to withdraw his acceptance of [his] nomination, I am here to take on the challenge as PDP-Laban’s vice presidential candidate,” Go said after filing his COC.

Duterte also announced his retirement from politics on Saturday.

“I don’t want to be remembered as just another senator or vice president,” Go said.

“I want to be remembered as a public servant whom any ordinary citizen can approach and who will wholeheartedly serve for the welfare of our country,” he added, speaking partly in Filipino.