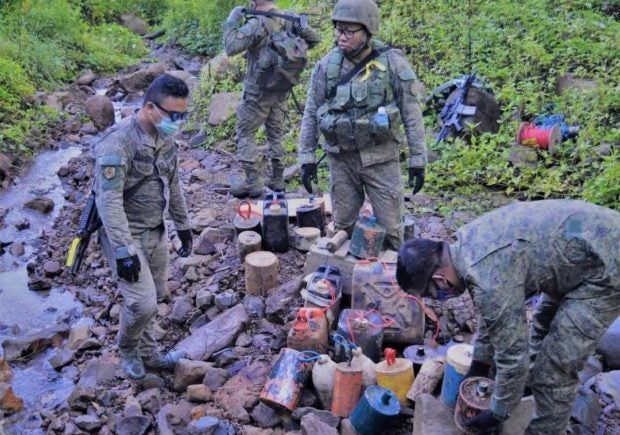 CAGAYAN DE ORO CITY––A tip from a former communist guerrilla has led to the discovery on Oct. 8 of 1,076 pieces of dynamites and anti-personnel mine (APM) in Sitio Malinao, Barangay Kalasungay, Malaybalay City, Bukidnon, the military said.

Lt. Col. Edgardo Talaroc Jr., commander of the Army’s 8th Infantry Battalion, said the troops found the dynamites after Ronald Landasan alias “Gamay” or “Gaspar,” a former squad leader of a New People’s Army (NPA) unit before he surrendered to the government, confirmed they were used as materials to make APMs.

Landasan, who used to serve as a squad leader of the NPA’s Sentro de Gravidad Dario of its Guerrilla Front 89, decided to reveal the existence of the dynamites because he did not want these to be used against soldiers, according to Talaroc.

“They were intended to be used by the [NPA] to wound and kill soldiers operating in the mountains of Bukidnon,” Talaroc said Landasan told him.

Talaroc said the Ottawa Convention bans the possession, stockpiling, production, transfer, and use of landmines.

“We will also investigate and find out the source of these dynamites and file charges against them,” Talaroc said.

Brig. Gen. Ferdinand Barandon, commander of the 403rd Infantry Brigade, said the seizure of the dynamites prevented the plan of NPA rebels to inflict harm against government soldiers and possibly innocent civilians.

The dynamites were turned over to the Bukidnon Provincial Explosive Ordnance Disposal and Canine for proper disposition.

This developed as the Army’s 4th Infantry Division (4ID) said its 10th Forward Service Support Unit (10FSSU) had disposed of the improvised explosive devices (IEDs) confiscated from the NPA.

The 4ID said they destroyed on Oct. 1 some 77 assorted IEDs, which could be used as APM, in Barangay Tignapoloan here.

Assisting the 10FSSU in the detonation were personnel from the 2nd Explosive Ordnance Disposal Platoon of the Army Support Command.

“The biggest of the IEDs was a 20-liter container-sized explosive device that could have easily killed soldiers or civilians,” Sta. Maria said.

Major Gen. Romeo Brawner Jr., 4ID commander, said they disposed of the APMs to ensure that these would not be used anymore.