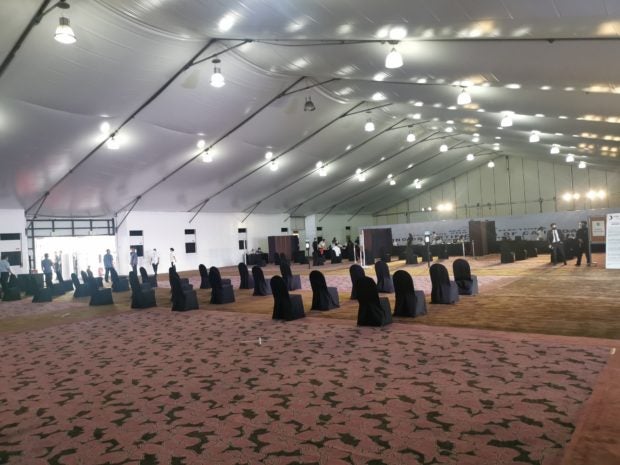 EMPTY CHAIRS: The area, where the filing of the certificate of candidacy at the Harbor Garden Tent at Sofitel hotel in Pasay City, stands empty on the first day of COC filing. INQUIRER.net/JOHN ERIC MENDOZA

MANILA, Philippines — The first day of the certificate of candidacy (COC) on Friday did not see a lot of aspirants for national posts, Commission on Elections (Comelec) spokesperson James Jimenez said.

Jimenez, however, said that the COVID-19 pandemic is not a factor on the low turnout of aspirants, saying this is normal on the first day of filing of candidacy.

“We don’t think that the pandemic is actually an issue here, because this is the exact pattern that we see every time we are filing; the first day really doesn’t see a lot of filers,” he said in a press conference after the COC filing.

He continued: “But for the most part, most of the candidates tend to cluster towards the end of the period.”

He also noted that the first day of COC is “very peaceful and organized.”

The COC filing was conducted at the Harbor Garden Tent at Sofitel hotel in Pasay City, from 8 am to 5 pm.

The earliest to lodge a COC was House Deputy Speaker and Antique Rep. Loren Legarda who showed up at 8 a.m.

Senator Manny Pacquiao and Buhay Partylist Rep. Lito Atienza came in an hour later to formalize their bids for president and vice president in next year’s polls.

Living up to its label was Agap Party-list, which was the first party-list to file a COC on Friday. “Agap” is a Filipino word that connotes promptness.