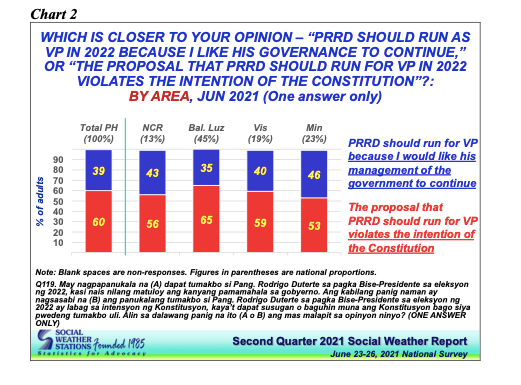 MANILA, Philippines — Sixty percent of Filipinos said that President Rodrigo Duterte’s vice presidential candidacy “violates the intention of the Constitution,” while only 39 percent wanted him to run.

Meanwhile, the remaining 1 percent did not give an answer, said the Social Weather Stations (SWS).

These were the results of the recent SWS survey on people’s opinion about Duterte’s vice presidential bid in the 2022 national elections. 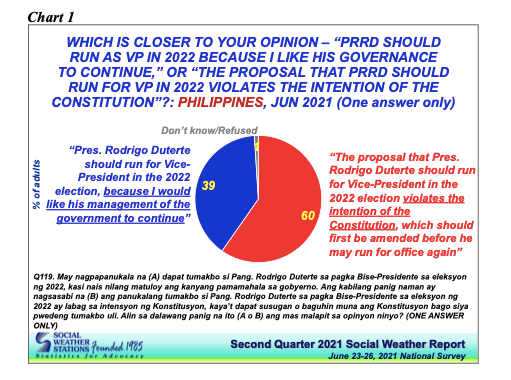 According to the SWS, the survey asked respondents whether they believe the proposal Duterte’s candidacy for vice president in the 2022 elections “violates the intention of the Constitution, which should first be amended before he may run for office again,” or that he should run “because they would like his management of the government to continue.”

“Majorities across basic demographics say President Duterte running in 2022 would violate the Constitution,” said SWS in the survey results.

Results of the survey showed that those who said his candidacy violates the constitution is highest in Balance Luzon at 65 percent, followed by Visayas at 59 percent, Metro Manila at 56 percent, and Mindanao at 53. 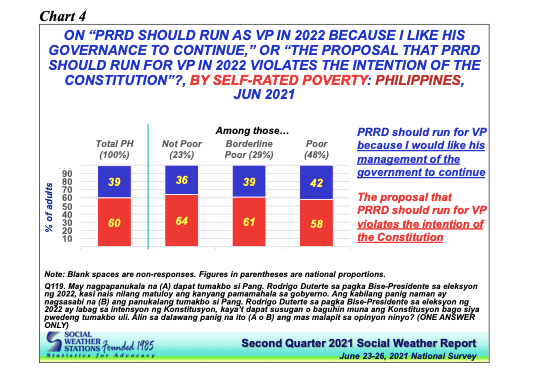 The survey results also showed that majorities are opposed to a VP run for Duterte, regardless of poverty.

Of the Filipinos who identified as “poor” 58 percent opposed Duterte’s VP run, 61 percent among “borderline poor” and 64 percent among those who said they were “not poor.”

In the June 2021 survey on net satisfaction rating, Duterte’s rating was at 62 percent. 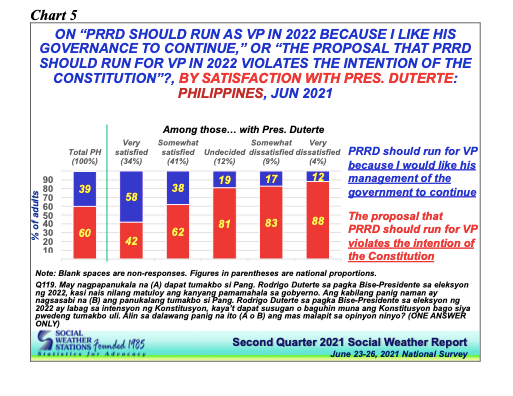 The SWS survey question on people’s opinion about the proposed vice presidential bid for Duterte in 2022 was non-commissioned. It was included on SWS’s initiative and released as a public service. 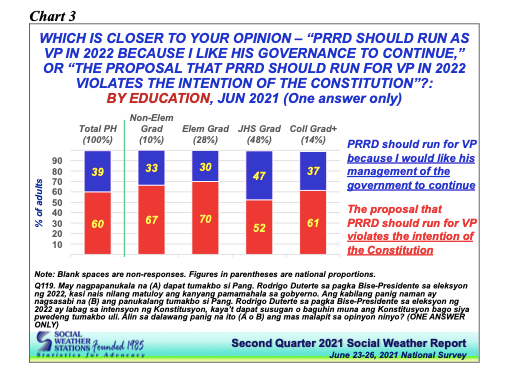 This survey was conducted after the Partido Demokratiko Pilipino–Lakas ng Bayan (PDP–Laban) faction led by Energy Secretary Alfonso Cusi nominated and proclaimed Duterte at it’s candidate for Vice President in the 2022 national elections.

After this, one of the framers of the 1987 Constitution, Lawyer Christian Monsod, said he is willing to file a complaint should President Rodrigo Duterte run for vice president in 2022, warning that his candidacy may serve as a “backdoor” to another presidential term.

Despite the backlash, Duterte officially accepted the nomination on Sept. 23.

Duterte vows to ‘continue crusade’ to run for VP in 2022