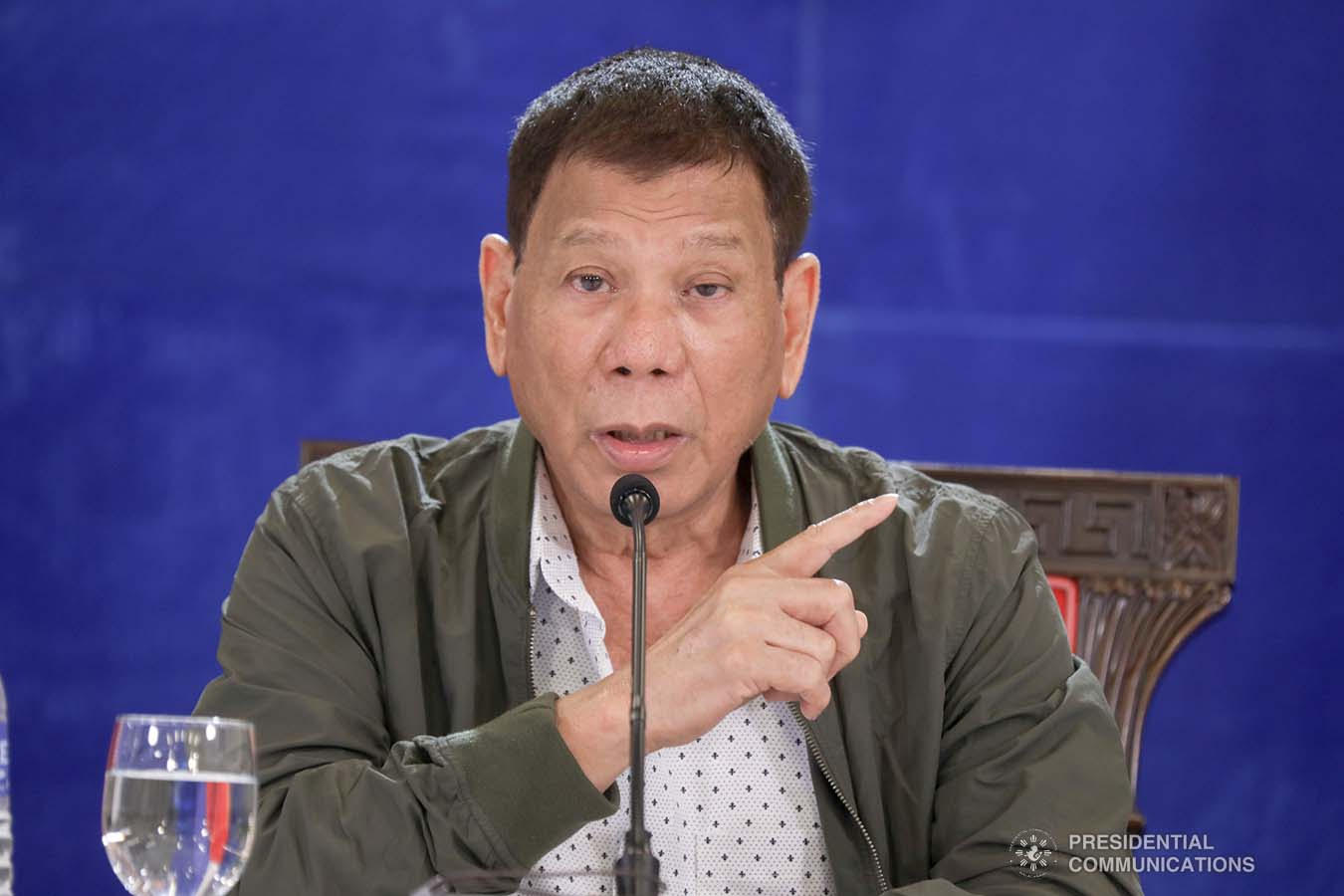 MANILA, Philippines—While President Rodrigo Duterte expressed confidence he would easily win as vice president in 2022 because “there is no opposition,” a political expert said “it’s too early to say.”

The party that Duterte hopes to ride in his vice presidential trip is wracked by factionalism and not all leaders of provinces that could deliver a huge win for him are in on his plans.

PDP-Laban, the ruling party, is now torn between the faction led by Energy Secretary Alfonso Cusi and Sen. Koko Pimentel, son of the original founder of the party former Sen. Aquilino Pimentel.

READ: PDP-Laban: From fighting dictatorship to fighting each other

Judging from the list of governors presented by the Cusi faction as supportive of Duterte’s vice presidential bid, not all provincial leaders belonging to PDP-Laban or allied with it have Duterte’s back.

In a statement released by the Cusi faction, the governors on the list believed that Duterte, as vice president, could influence his successor to pursue his war on drugs, infrastructure program, anti-poverty and economic recovery plans.

READ: Governors back Duterte’s plan to run for vice president in 2022 – Evardone

But sticking like a sore thumb is the absence on the list of governors from several provinces with some of the biggest voting populations in the country, like Pangasinan, which is led by Gov. Amado Espino III, a member of PDP-Laban and whose father, Amado Espino Jr., is party chair in the province. 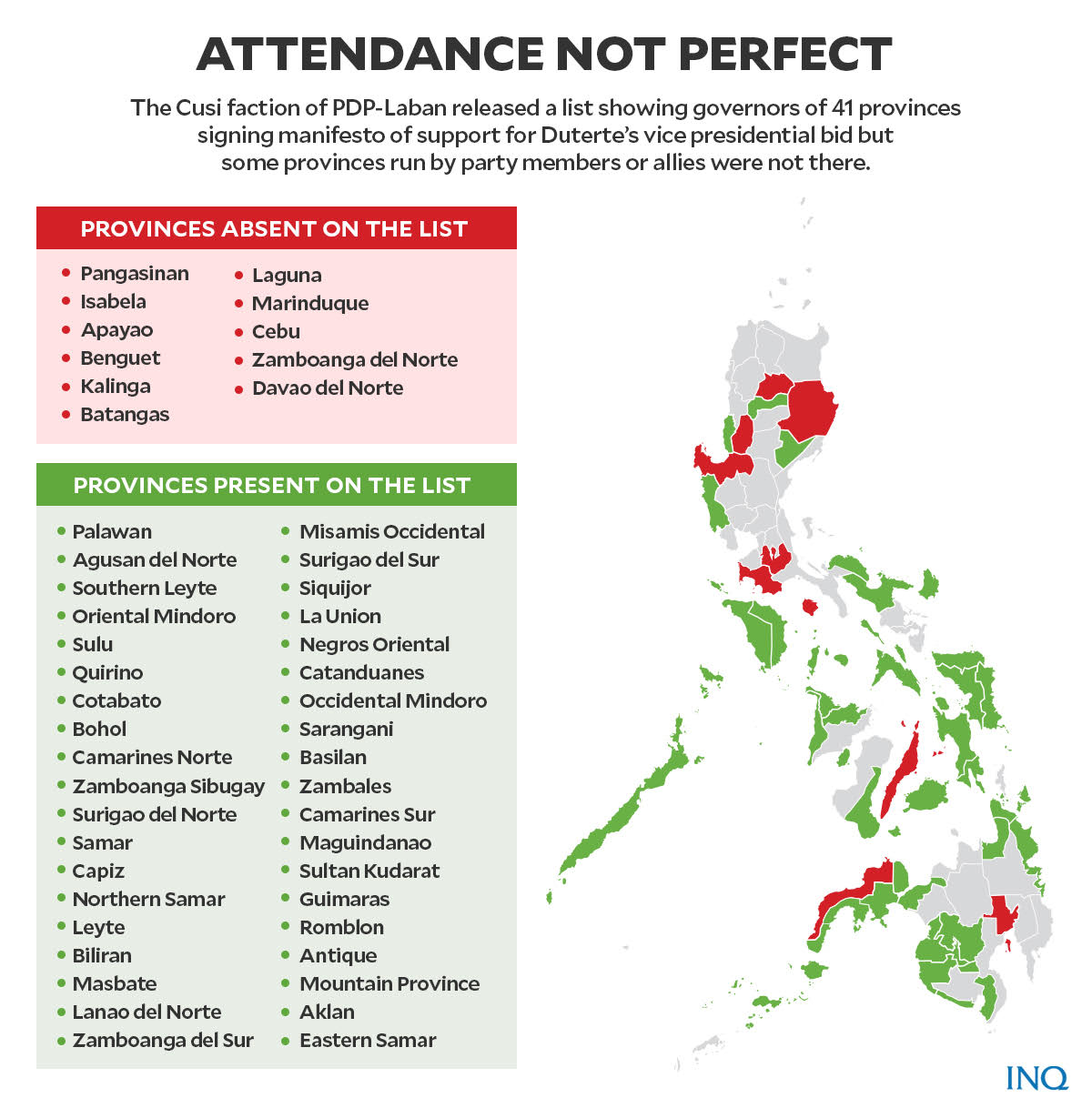 They are from the provinces of Bulacan, Nueva Ecija, Iloilo, Ilocos Sur and Western Samar.

READ: Duterte accepts PDP-Laban nomination to run for VP in 2022

At least 16 provinces with top officials allied with Duterte or members of his party were also not on the Cusi faction’s list.

In his weekly taped address, Duterte boldly predicted that the opposition will hold an empty bag after next year’s elections because “they have nothing to show to Filipinos.”

But Prof. Maria Ela Atienza, of the University of the Philippines’ (UP) Department of Political Science, said it’s hasty for Duterte to say that he will win as vice president.

“A lot can change between now and the elections,” she told INQUIRER.net.

She said even inside the PDP-Laban, which Duterte would use as a vehicle in the vice presidential race, “a lot of things can still happen” that could hurt the President’s bid to hold the position now occupied by Leni Robredo, whom Duterte had repeatedly insulted.

Prof. Jean Franco, a political expert from UP’s Department of Political Science, said that Duterte’s remark was expected as he needed to make people perceive that he will win.

However, like Atienza, she said the present state of the PDP-Laban would affect Duterte’s vice presidential bid even if election surveys showed that he is the “candidate to beat.”

Last June, as the rift between Duterte and Sen. Manny Pacquiao widened, the PDP-Laban engaged in a word war that divided the party.

Currently, PDP-Laban is split into two wings—Cusi’s and that led by Pimentel and Pacquiao.

The cracks inside PDP-Laban showed conflicting interests but also drew the spotlight to one reality—that “the solid coalition for Duterte is no longer solid.”

This was how Bayan Muna Rep. Carlos Zarate described the PDP-Laban rift last June, saying that “we expect more of these brawls in the next months.”

The absence on the Cusi list of leaders of vote-rich provinces is being taken as a sign of the rift. But in Pangasinan, aside from the absence of the younger Espino on the list of governors committed to Duterte’s vice presidential run, some PDP-Laban officials had also apparently jumped fences.

These included former Transportation Undersecretary Tim Orbos, who ran as PDP-Laban candidate for a House seat in 2016 but declared support already for a campaign to convince Manila Mayor Isko Moreno to run for president.

The reason for the absence of governors, who were on the July 19 list, on the Aug. 27 list was not clear but Atienza said local officials needed to “calculate” their own interests as most were “not loyal” to a single political group.

While the PDP-Laban appeared to be invincible in the 2019 midterm elections, some of its officials are showing this early a preference for Moreno.

Moreno is believed to be the subject of the President’s tirades against a Metro Manila local executive who has the “training of a call boy.”

However, despite Duterte’s expletives, the campaign for Moreno is picking up.

Recently, concerns were raised about Pangasinan Governor Espino who was not included on the list of local executives backing Duterte. Pangasinan has the third highest voting population in the country.

It was reported that he is backed by Orbos, who is now among the convenors of Ikaw Muna Pilipinas, a movement to convince Moreno to run for president.

Last Saturday (Aug. 28), the group held a series of consultations in Cagayan Valley to ask the Manila mayor to run for president.

She said political groups in the Philippines are in “disarray” because elections are personality-oriented instead of being program-based.

“Because of this, the tendency is to gravitate towards “winnable” candidates rather than principles,” Atienza said.

“This is the challenge for the opposition and anyone who wishes to transform the personality-oriented nature of Philippine elections and politics,” she added.