Duterte accepts PDP-Laban nomination to run for VP in 2022 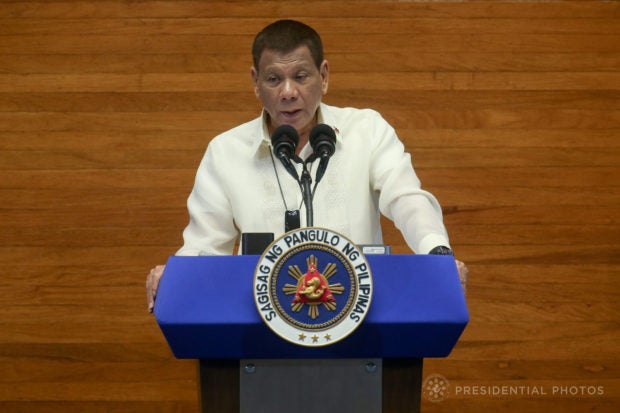 In a statement on Tuesday, PDP-Laban said Duterte accepted the nomination after being presented with “popular calls” of the PDP-Laban councils for a “transition of government that will guarantee the continuity of the administration’s programs.”

His run will also “ensure that the country’s COVID-19 vaccination program will be sustained in the critical stage of the pandemic.”

“President Rodrigo Roa Duterte agreed to make the sacrifice and heed the clamor of the people and accepted the endorsement of the PDP-Laban party for him to run as vice president in the 2022 national elections,” the party said.

Malacañang earlier Tuesday said it cannot confirm if Duterte has already accepted the PDP-Laban’s endorsement for him to run for vice president in 2022.

Presidential spokesperson Harry Roque, however, confirmed that the President met with PDP-Laban president and Energy Secretary Alfonso Cusi along with party member and Presidential Assistant for the Visayas Michael Diño on Monday.

(I can only confirm that last night, the President met with PDP-Laban president Sec. Cusi and Presidential Assistant for the Visayas Michael Diño.)

“I can confirm nag-usap po sila pero I do not have personal knowledge kung ano po ang nag-transpire and I will leave it to PDP-Laban as a political party to make their announcement,” he added.

(I can confirm that they talked but I do not have personal knowledge of what transpired and I will leave it to PDP-Laban as a political party to make their announcement.)

As early as May this year, PDP-Laban has adopted a resolution to “convince” President Duterte to run for the vice presidency in 2022.

Early this month, the party, led by Cusi, endorsed the tandem of Senator Bong Go and Duterte for the 2022 elections.

Duterte was initially unclear if he would pursue the second-highest government post in the country, with one part saying it would be a “good idea” since he still has “unfinished business” and he could circumvent possible lawsuits and the other saying is already tired and wants to retire.

The President has floated a number of times running for vice president saying he is “somewhat sold” on the idea.

In a recent incident, Duterte said he would vie for the second highest post to immunity from lawsuits he may face.