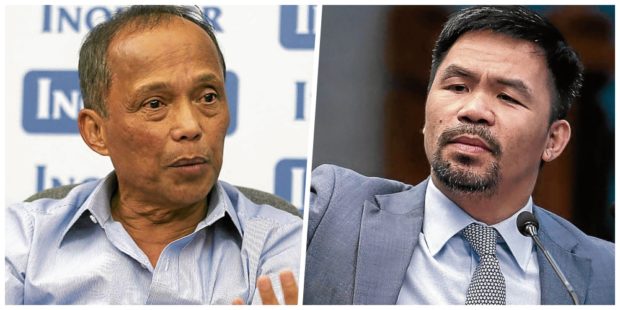 “With President Duterte’s steadfast leadership and the strong public support for his agenda of change, the government will be able to expeditiously and effectively deliver our people, our communities, and our economy back to good health,” read the resolution approved by the PDP-Laban National Council in a meeting questioned for its legitimacy by other key party leaders.

Ronwald Munsayac, the party’s executive director, maintained in a Twitter post that the party’s vice chair, Energy Secretary Alfonso Cusi, was not authorized to call the meeting at Montebello Villa Hotel here, with members attending physically or online.

The acting party president, Sen. Manny Pacquiao, who was rumored to be running for the presidency in 2022, did not attend. He issued a circular on May 25, strongly advising members not to heed Cusi’s invitation, saying “this is not the time for politics.”

Amid the brewing discord, the President appealed for party unity in a message played during the national council meeting.

“Again, I call on all of our party mates to stand together and remain united, not by personal interest but by our principles and values as we chart the future of our party and the rest of the nation,” Mr. Duterte said.

The day before, he directed Cusi “to organize, convene and preside over the council meeting,” according to presidential spokesperson Harry Roque.

Raul Lambino, PDP-Laban vice president for external affairs, moved for the adoption of the resolution urging the President to run for vice president and choose the presidential candidate, citing several petitions from different local government units.

“The government since 2016, under the able leadership of our party chairman has made great strides in its battle against the scourge of drugs, terrorism, insurgency, corruption and poverty,” the resolution read.

The national council immediately approved the document. It also voted to hold its national assembly on July 17 for the election of party officers.

Pacquiao’s camp had no immediate reaction to the resolution.

The membership committee announced that the party currently had about 100,000 members.

At least 47 House lawmakers, including Speaker Lord Allan Velasco, the party’s executive vice president, were present via Zoom. Velasco was in Davao City to personally greet the President’s daughter, Mayor Sara Duterte Carpio, on her birthday.

Over the weekend, PDP-Laban officers in Davao City and the Island Garden City of Samal issued a statement urging Mayor Duterte to run for president.

Pacquiao earlier discouraged members from participating in the national “assembly,” saying it should be approved by both him as party president and Mr. Duterte as chair.

At the start of the meeting, Negros Oriental Rep. Arnolfo Teves Jr., who attended via Zoom, moved that the meeting be adjourned immediately because it bypassed processes under their party rules.

“I feel [being] taken for granted, being bypassed because Section 60 (of the Constitution of PDP-Laban) says that the secretary general shall serve a written notice (of the meeting). I am the secretary general of the PDP-Laban. I’m still alive, and I am not incapacitated. I could not understand why I was not the one who was asked to sign the notice,” he told his colleagues.

Teves’ motion was blocked and the meeting continued. The council also did not recognize him as secretary general and said the position was currently vacant after the resignation of former Speaker Pantaleon Alvarez.

Lambino said it was only the national assembly that could elect the secretary general and other national party officers.

The Partido Demokratiko ng Pilipino-Lakas ng Bayan (PDP-Laban) emerged in 1983 as a coalition of two minority political parties that opposed the Marcos dictatorship.

Laban was formed in 1978 and fielded a 21-member ticket in Metro Manila for the Interim Batasang Pambansa to challenge strongman Ferdinand Marcos in the parliamentary elections. All its candidates lost amid charges of massive poll fraud, including former Senators Benigno Aquino Jr. and Aquilino “Nene” Pimentel Jr., who founded the PDP in 1982.

Mayor Rodrigo Duterte of Davao City became the PDP-Laban’s standard-bearer in the May 2016 elections when he replaced Martin Diño. In February 2016, Duterte was named the party chair and eventually won the presidency with 39% of the votes tallied.

PDP-Laban has since coalesced with other political parties—Nacionalista Party, Nationalist People’s Coalition, National Unity Party and Lakas-CMD — to become the dominant political force in Congress.

From an estimated party membership of 10,000 nationwide in 2015 before Mr. Duterte became its presidential candidate, the number is now placed at 100,000.

They include five senators and 62 House members.

Your subscription could not be saved. Please try again.
Your subscription has been successful.
Read Next
Gov’t will no longer get half of private sector vaccine imports
EDITORS' PICK
US gets access to more PH bases
vivo Philippines offers a free bouquet of flowers and a premium necklace perfect for Valentine’s Day
House energy committee chair Arroyo bats for cheap electricity
CBCP releases litany of thanks for better health
Omega Speedmaster super racing: Tiny device massive change
12-year data track poor training of PH teachers
MOST READ
Don't miss out on the latest news and information.