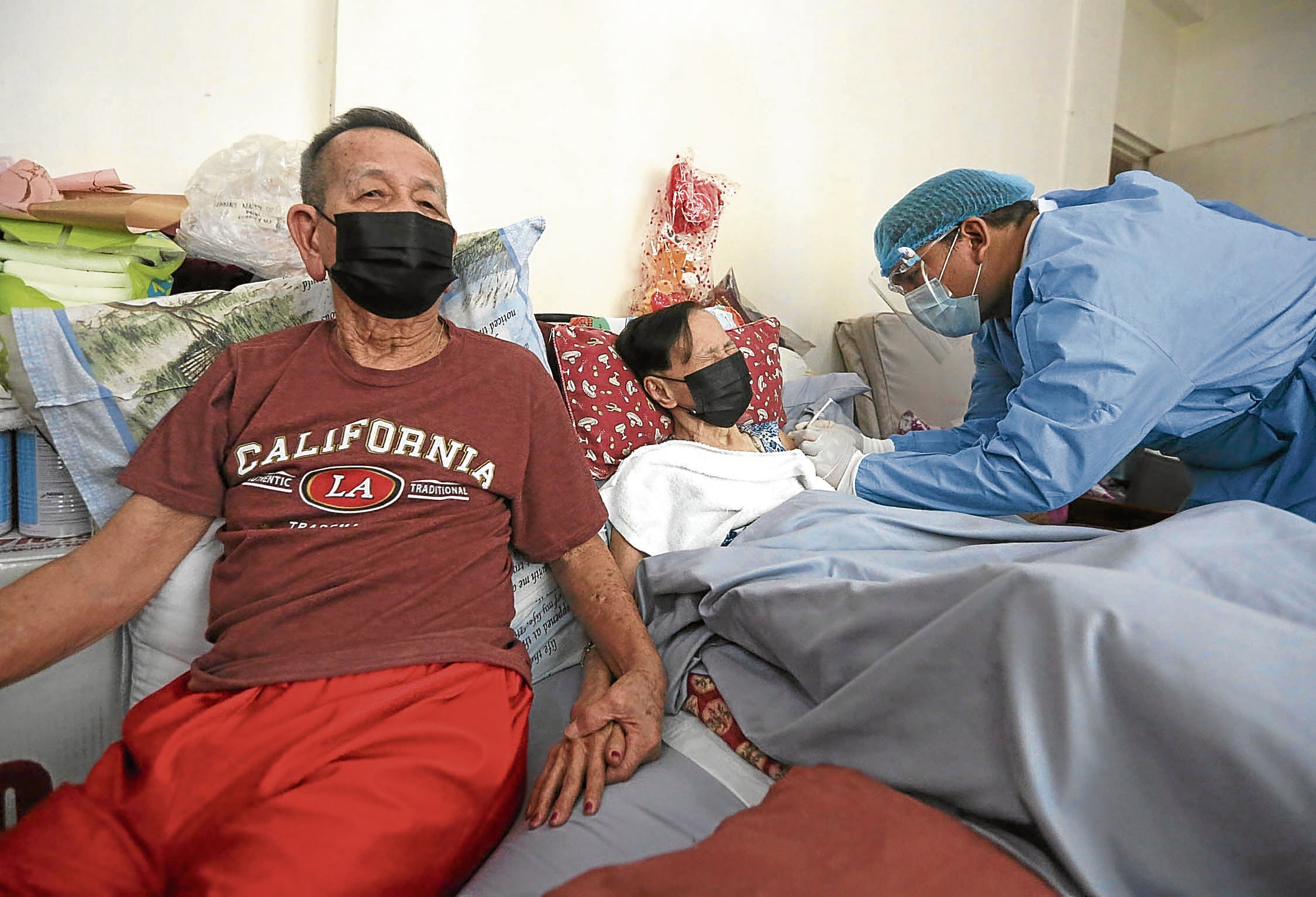 HOME SERVICE Holding each other’s hands, elderly couple Felicisimo and Natividad Pineda, both 91, receive their second dose of CoronaVac, the COVID-19 vaccine produced by the Chinese company Sinovac BioTech, in their house in Sta. Mesa, Manila, on Monday. The Manila Health Department is conducting home service vaccination to seniors and bedridden residents who cannot go to designated sites. —MARIANNE BERMUDEZ

MANILA, Philippines — The government will no longer get half of the vaccine doses bought by the private sector as it prepares to expand the immunization program to economic front-line workers this month.

Vaccination chief implementer Secretary Carlito Galvez Jr. said in a webinar hosted by Go Negosyo on Monday that companies were given the flexibility to use all of their purchased vaccines on their workers and their dependents.

Under the COVID-19 Vaccination Program Act of 2021, private companies could import vaccines only through a multiparty agreement with the Department of Health (DOH) and the foreign pharmaceutical companies. Under such agreement, the companies were “encouraged” to donate half of their purchases to the government.

There would also be a slight delay in the arrival of up to 12 million doses that were initially expected this June for the inoculation of economic front-liners and the indigent population under the A4 and A5 priority categories, respectively.

In a radio interview on Monday, presidential adviser for entrepreneurship and Go Negosyo founder Joey Concepcion said the shipment of the first 1.17 million AstraZeneca doses purchased by the private sector was now expected by July 14 instead of the last week of June.

He said another 1.17 million AstraZeneca doses would arrive in August.

Health Undersecretary Maria Rosario Vergeire noted in another television interview on Monday that the 12 million doses would not be enough to cover the entire A4 working population, of which about 13 million were in Metro Manila and nearby provinces.

“One of the recommendations of the DOH was to stratify according to age group,” Vergeire said, adding that they recommended to inoculate first the employees and informal sector workers who could not afford to work at home, starting with those aged 50 to 60.

As of May 30, the government had administered 5.18 million initial doses, while 1.21 million people had completed the full two-dose vaccination. However, Galvez said only 1.38 million of the 9.4 million senior citizens had received a shot.

Malacañang also assured mayors that areas outside Metro Manila experiencing a surge in COVID cases should not worry as they would get enough vaccines.

Presidential spokesperson Harry Roque issued the statement on Monday after the League of Cities of the Philippines wrote to Galvez to seek the inclusion of more places in the priority list of vaccine recipients. The group cited Batangas, Pampanga, Cagayan Valley and the Cordillera Administrative Region where COVID cases had spiked.

He said the decision of the COVID task force was to distribute up to 58 percent of the vaccine supply to areas outside of Metro Manila, Bulacan, Cavite, Laguna, Rizal, Pampanga, Batangas, Metro Cebu and Metro Davao.

Roque said the newly delivered 50,000 doses of the Sputnik V vaccines from Russia would also be sent to areas with an infection surge.

In the same Palace briefing, Philippine Ambassador to the United States Jose Manuel Romualdez confirmed that the Philippines would be one of the recipients of a portion of 80 million surplus COVID vaccines that Washington would be donating to countries around the world.

Romualdez said that US President Joe Biden would announce the donations this week.

Responding to calls to ease restrictions on the movement of the elderly who have been inoculated against COVID, Roque said vaccinated senior citizens should continue to remain at home most of the time until the country had reached “population protection.”

—WITH REPORTS FROM LEILA B. SALAVERRIA AND JEROME ANING