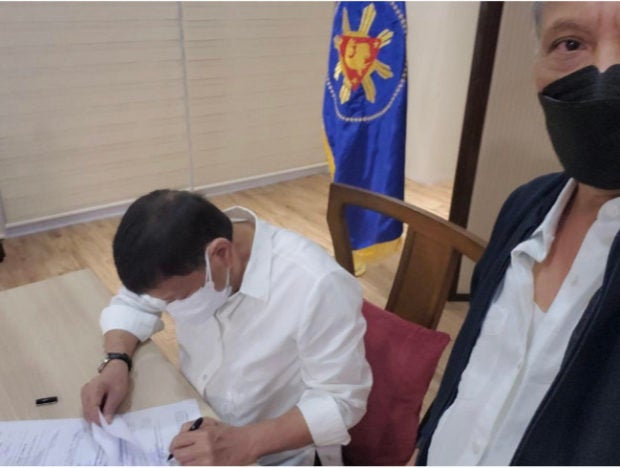 In this undated photo released by Energy Secretary Alfonso Cusi on Thursday, September 22, 2021, President Rodrigo Duterte signs the certificate of nomination and acceptance (CONA) for his vice presidential bid in the 2022 elections. Photo from Cusi

MANILA, Philippines — President Rodrigo Duterte has formally accepted his nomination by a PDP-Laban faction to run for vice president in the 2022 national elections.

Energy Secretary Alfonso Cusi, who is leading a camp within the ruling political party, released a photo on Thursday showing Duterte signing the certificate of nomination and acceptance (CONA).

The PDP-Laban likewise released a photo of the signed CONA. 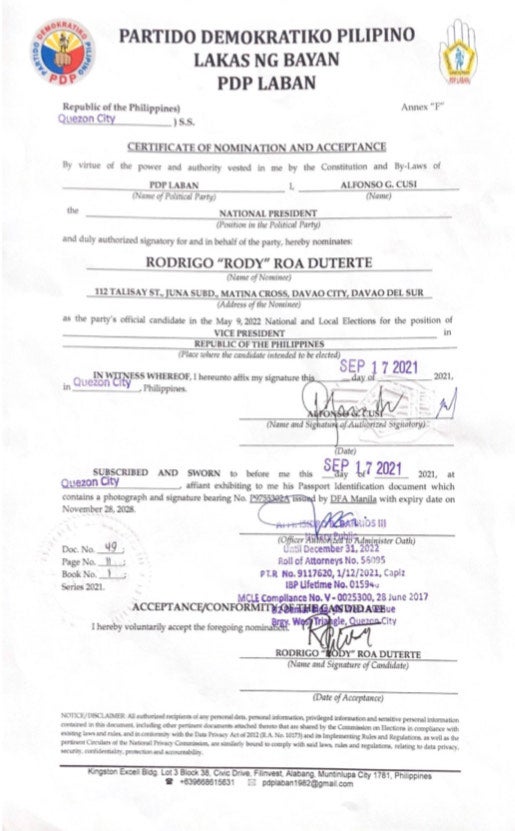 The CONA signed by Rodrigo Duterte

Earlier this month, the Cusi-wing PDP-Laban officially proclaimed  Duterte as its vice-presidential candidate for the 2022 elections as well as Senator Bong Go as its standard-bearer.

However, Go has so far rejected the nomination.

On the other hand, the PDP-Laban faction led by Senator Koko Pimentel has nominated Senator Manny Pacquaio as its presidential candidate in the upcoming polls.

Read Next
S. Korea urges more testing over fear of holiday COVID-19 surge
EDITORS' PICK
PSA: Fewer births, more deaths logged from Jan-Aug 2021 than same period in 2020
DOTr to defend proposal to increase passenger capacity in public transport
Legarda emphasizes role of ICC/IPs in nation building this IP month
Work-From-Home is here to stay and requires reliable logistics
USAID Opportunity 2.0 calls for applicants for grants for out-of-school youth engagement
Oops! DENR clarifies only kids aged 11, below not allowed in dolomite beach
MOST READ
Martires asks why he is being singled out over issues on releasing SALNs
AC Bonifacio’s dance cover of Lisa’s ‘Money’ leaves original choreographer ‘mind blown’
Isko to critics after remarks vs Robredo: I’m sorry, this isn’t about Mr. Congeniality
Bongbong says PH should modernize infrastructure to become Asia’s next logistics hub
Don't miss out on the latest news and information.