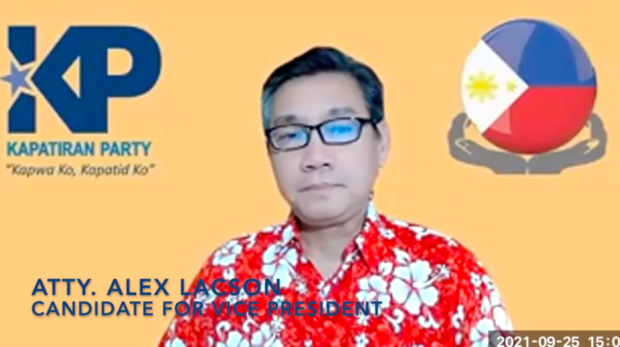 MANILA, Philippines — Lawyer and patriotic books author Alexander Lacson has announced he will run for vice president in the upcoming 2022 elections under the Kapatiran Party.

In a video message uploaded on the party’s Facebook page, Lacson said it was a “very difficult decision” for him to vie for the vice presidency, knowing that doing so will upend his life and that of his family’s.

(There were many crying sessions, many long praying sessions and many sleepless nights before we arrive at this decision. I know I will only bring chaos to my life and to the lives of my family.)

While the Kapatiran party announced Lacson as its vice presidential candidate, it did not say who will be the running mate of the lawyer and author.

In 2001, Lacson ran as representative of Negros Occidental’s sixth district but lost.

He also ran for a Senate seat in 2010 under the Liberal Party-led coalition of  the late President Benigno Aquino III but failed to get elected.

Lacson is a co-founder of the Malcolm Law Firm in Pasig, according to his website.

Among the books he published is the bestselling book, “12 Little Things Every Filipino Can Do to Help Our Country.”

So far, those who have already publicly announced their vice presidential bid for the 2022 polls are President Rodrigo Duterte, Senate President Vicente Sotto III, and doctor Willie Ong.

The filing of certificates of candidacy is set on Oct. 1 to 8.