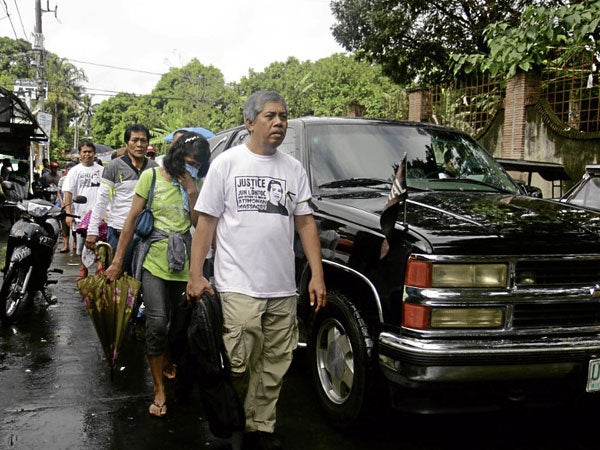 FILE PHOTO: Residents of Dolores town in Quezon join the funeral march for environmentalist Tirso Lontok Jr., who was among those killed in Atimonan on Jan. 6. DELFIN T. MALLARI JR.

MANILA, Philippines —“I pray that our next leaders and our future generations will not squander our natural resources and fight for the integrity of our environment, in a manner fiercer and more effective than my administration had ever done.”

That was a portion of President Rodrigo Duterte’s final State of the Nation Address (SONA) last July 6.

Looking back at his achievements during his term, Duterte, during his SONA, discussed his administration’s achievements in environmental protection, including the controversial rehabilitation of Manila Bay using crushed dolomite. 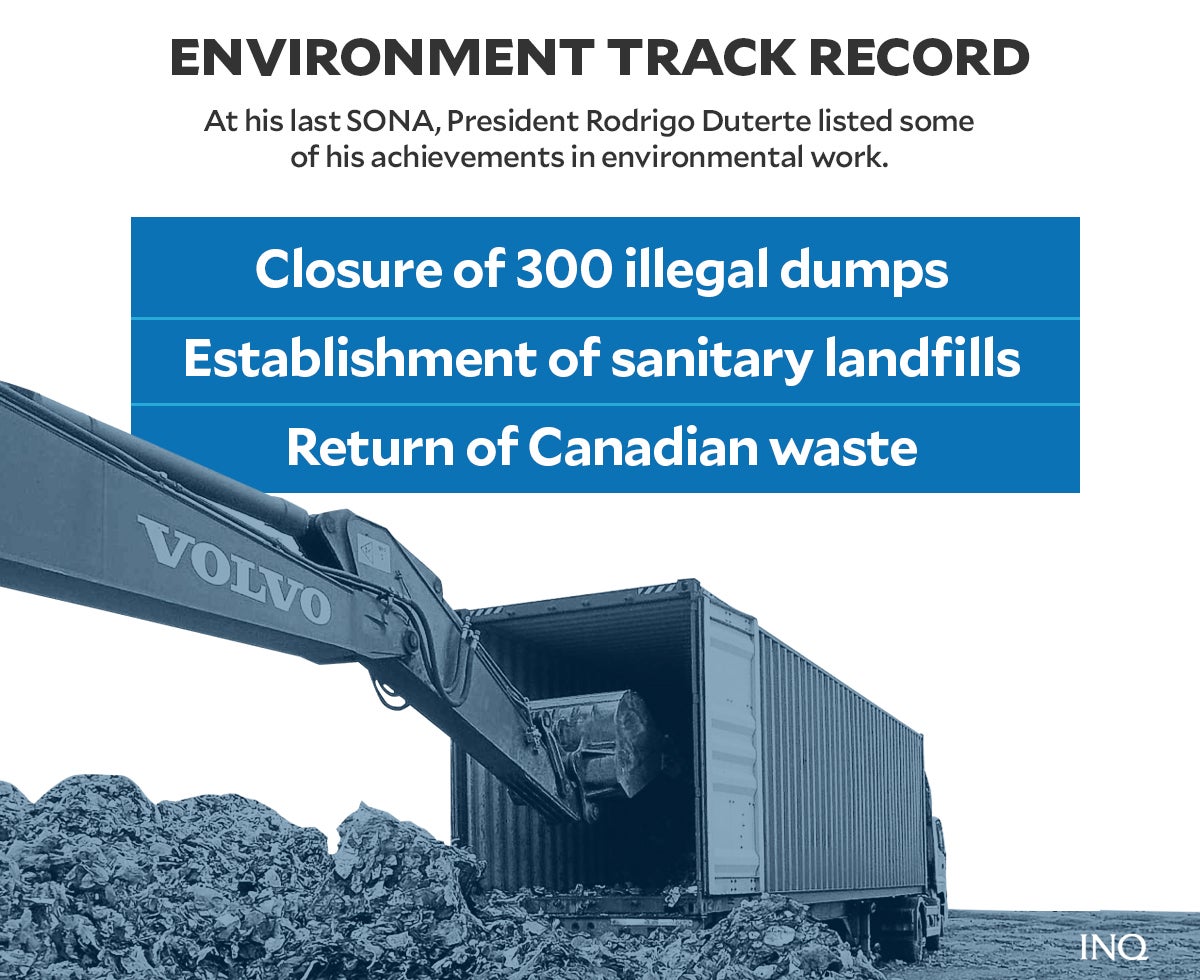 He also mentioned government efforts that led to the closure of over 300 illegally operating open dumps nationwide, the establishment of sanitary landfills, and the successful return of tons of Canadian waste illegally exported to the Philippines.

READ: Never again: Trash returned to Canada after 6 years in the Philippines

The Department of Environment and Natural Resources (DENR) lauded Duterte’s “immeasurable support” for projects of the agency.

“We at the department have the utmost gratitude to our honorable President Rodrigo Roa Duterte for his immeasurable support to the initiatives of the DENR and for reinforcing the need to protect and conserve the environment,” Environment Secretary Roy Cimatu said in a statement.

“The DENR’s programs and projects will not be successful without the President’s trust and confidence that we can deliver on his instructions,” he added.

However,  behind the accomplishments and the Duterte administration’s “fierce” and “effective” campaign to protect environmental resources are grim numbers involving the killing of environmental activists and defenders in the Philippines.

As the country commemorates Rule of Law Month in September, data surface about the alarming culture of violence and impunity that is confronting environmental advocates in the Philippines.

The Philippines remains to be the deadliest country in Asia for environmental defenders—for the eighth consecutive year since 2013 when Global Witness first launched its international report. 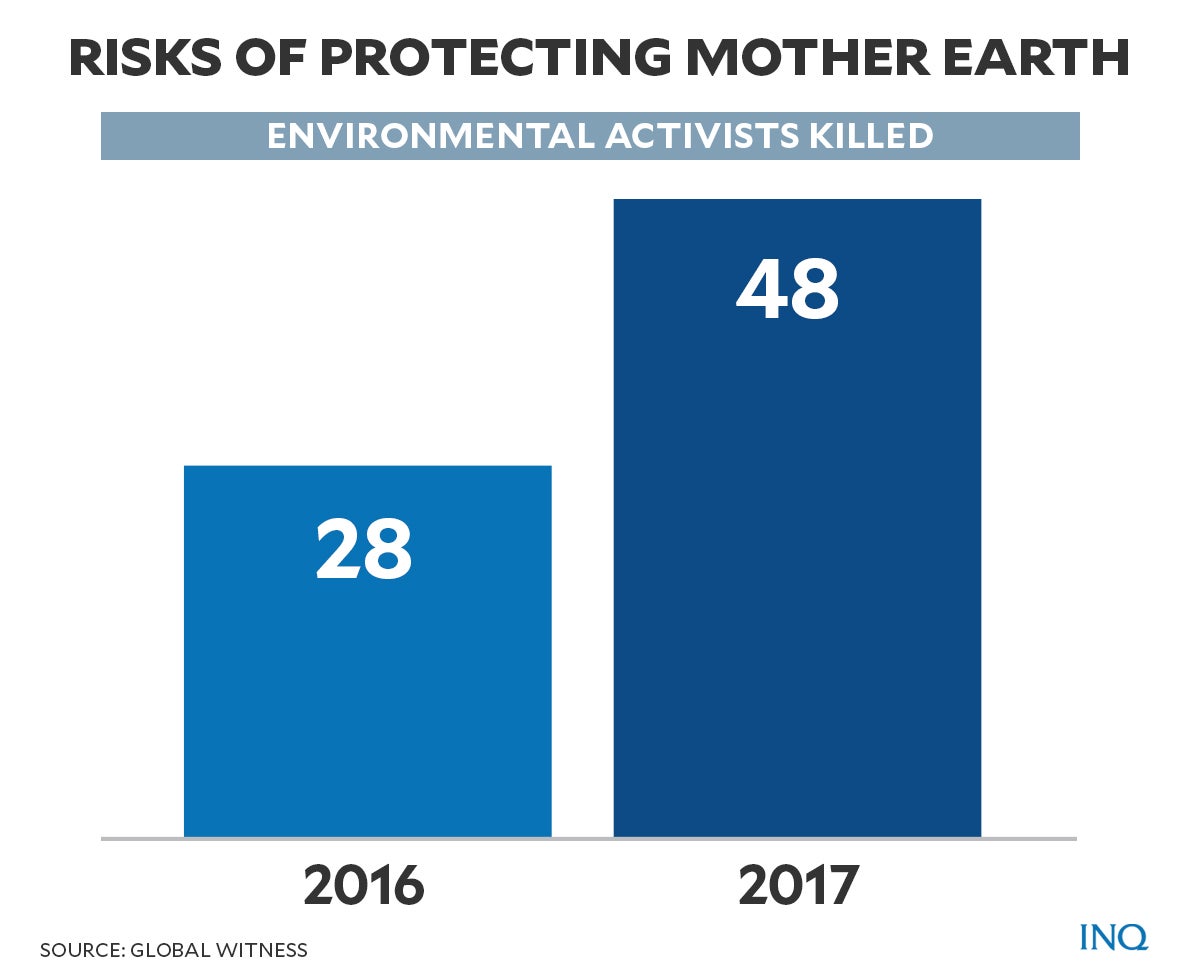 This was among the key findings of Global Witness, an environment and human rights watchdog, in its annual report.

READ: PH ranks 1st in Asia, 3rd worldwide for most number of slain environment advocates in 2020

The London-based watchdog said a total of 227 killings were reported worldwide in 2020, or an average of more than four people murdered each week, making 2020 the most dangerous year for environmental defenders.

Global Witness defined land and environmental defenders as “people who take a stand and peaceful action against the unjust, discriminatory, corrupt or damaging exploitation of natural resources or the environment.” 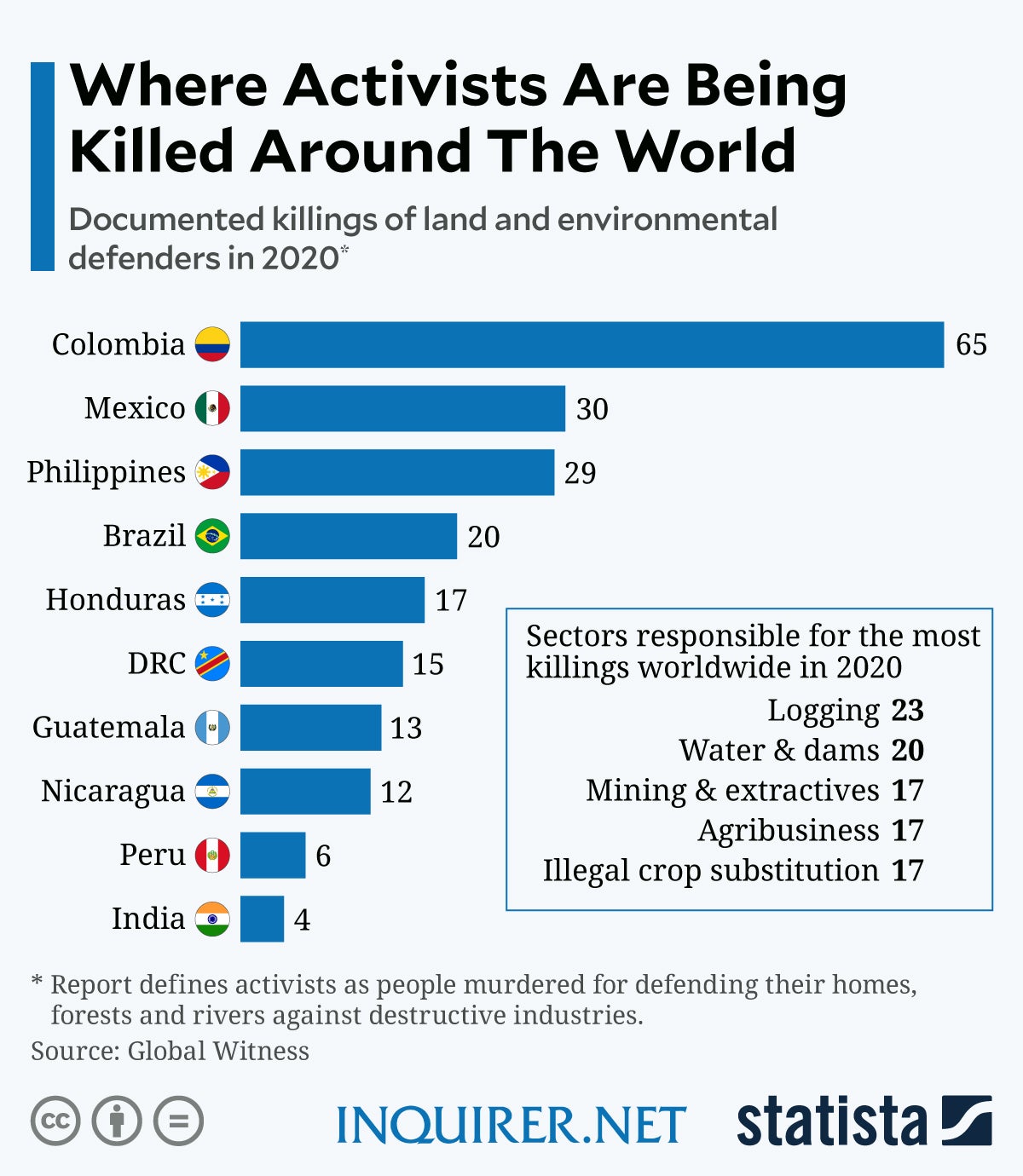 A total of 29 killings involving defenders were documented in the Philippines in 2020. Columbia and Mexico, meanwhile, logged 65 and 30 cases of killings.

READ: Where Activists Are Being Killed Around The World

“In the Philippines, the deteriorating human rights situation has received increasing international condemnation. Opposition to damaging industries is often met with violent crackdowns from the police and military,” the report read.

“In our data, over half of the lethal attacks were directly linked to defenders’ opposition to mining, logging, and dam projects,” said Global Witness. 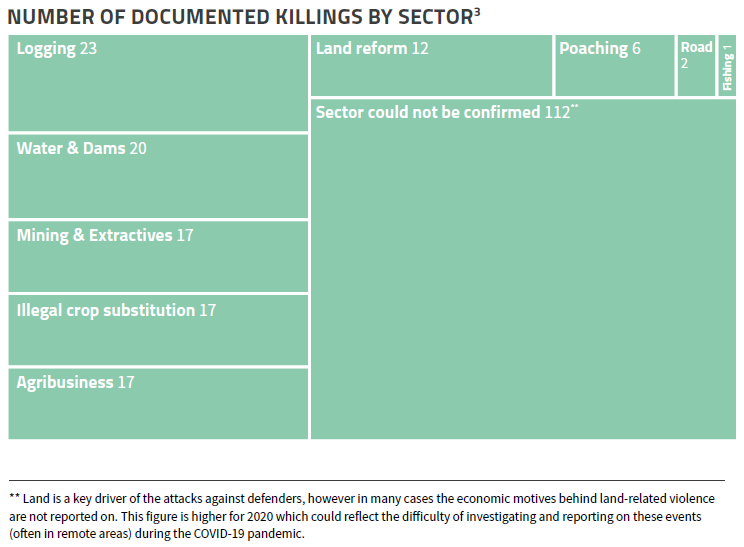 The watchdog also highlighted the Tumanduk massacre case, where nine leaders of an indigenous peoples’ community in Panay, accused of having links with communist rebels, were killed during police and military operations in Iloilo and Capiz last year.

According to reports, the indigenous leaders have opposed the construction of the multibillion-peso Jalaur mega-dam project in Calinog, Iloilo province.

“President Duterte’s years in office have been marked by a dramatic increase in violence against defenders,” the watchdog said.

“From his election in 2016 until the end of 2020, 166 land and environment defenders have been killed – a shocking increase for a country which was already a dangerous place to stand up for the environment,” Global Witness said.

In 2016, Global Witness reported 28 activists killed in the Philippines. The next year, the number of slain defenders increased to 48.

The report also noted there was evidence pointing to government actors, including soldiers or police, as the ones responsible for at least 53 deaths of cases documented worldwide in 2017.

In 2018, the international environment watchdog said the Philippines tallied a total of 113 killings three years into the Duterte administration.

That year, 30 defenders were murdered in the Philippines, according to data collected by Global Witness.

“When President Duterte came into power, he made three clear promises to his electorate: to eliminate corruption, to protect the precious environment of the Philippines, and to safeguard marginalized groups such as indigenous communities,” said Global Witness senior campaigner Ben Leather.

“Our new investigation could not be clearer—Duterte’s government has failed enormously on all three promises, and has left land and environmental defenders to be attacked with impunity,” Leather said.

“Businesses from coal to agribusiness, from mining to tourism, are allowed to run rampant and irreparably damage the lives of ordinary Filipinos. Corruption, within major government bodies, and conflicts of interest affecting well-known politicians is most certainly not under control,” he added.

In 2019, the numbers continued to climb, reaching 43 cases of killing of environmental defenders.

Aside from the increasing number of defenders killed in the country, data also emerged linking these attacks to agribusiness and mining.

What the data tell us

Global Witness, in its report, emphasized that climate crisis should not only be discussed based on its environmental impacts alone.

“[T]he unaccountable exploitation and greed driving the climate change crisis is also having an increasingly violent impact on people,” the group said, describing climate crisis as “crisis against humanity.”

“It may sound simplistic, but it’s a fact worth considering – the process of climate breakdown is violent, and it manifests not just in violence against the natural world, but against people as well,” the group said.

While Global Witness presented estimated data and numbers in their reports, the group believes that there is a disturbing trend of violent attacks against defenders. Documented killings have been increasing since 2018.

“Each killing is a complex and deeply personal tragedy, rooted in a predatory economic model driven by greed,” the report read.

“Unfortunately, without significant change this situation is only likely to get worse — as more land is grabbed, more forests felled in the interest of short-tern profits, both the climate crisis and attacks against defenders will continue to worsen,” it added.

The group also attributed the killings of land and environmental defenders to three “core truths” which are also connected to climate crisis.

The group noted that as climate breakdown affects every country differently, the violence against land and environmental defenders is likewise unequal. According to data, through the years, more fatal attacks were launched against indigenous people who are considered as agents of climate conservation.

“Indigenous peoples have been making the link between preventing climate destructive practices and preserving indigenous rights over several decades,” yet in 2020, 37 percent of the lethal attacks were committed against indigenous peoples.

Huge businesses are often involved in these violent attacks. However, withheld information and corruption allows those responsible for the attacks to get away with the crimes.

“Because the balance of power is stacked in the favor of corporations, and against communities and individuals, these companies are seldom held to account for the consequences of their commercial activities,” said Global Witness.

“It’s rare that anyone is arrested or brought to court for killing defenders. When they are it’s usually the triggermen—the ones holding the guns, not those who might be otherwise implicated, directly or indirectly, in the crime,” it added.

“Governments have been all too willing to turn a blind eye and fail in providing their core mandate of upholding and protecting human rights. They are failing to protect defenders – in many cases directly perpetrating violence against them, and in others arguably complicit with business,” the group explained.

The report also pointed out how most countries, including the Philippines, used the COVID pandemic to ironically strengthen “draconian measures” to control the public.

“President Duterte used the COVID pandemic to further crack down on dissent—implementing one of the strictest lockdowns enforced by the police and the military,” Global Witness said.

“The government also took advantage of the pandemic to rush through the Anti-Terrorism law, which came into effect in June,” it added.

The law, which is feared to accelerate red-tagging, might lead to an increase in violence against environmental and indigenous defenders.

Greenpeace Philippines, in a statement released on Monday (Sept. 13), reiterated the Global Witness’ position to make companies and governments accountable for the harassment and killings of land and environmental defenders.

“The continued killings and persecution of environmental activists, even during the time of pandemic shows distorted priorities that put profit and the gain of a few over the welfare of communities and the environment we depend on,” said Greenpeace Philippines Country Director Lea Guerrero.

“We demand justice and peace for activists of all causes, and call for urgent and effective protection mechanisms, and an enabling environment, for those who are peacefully defending people and the planet.”

Kalikasan People’s Network for the Environment (Kalikasan PNE) national coordinator Leon Dulce said the country is in need of a new leadership which can provide protection to the country’s “nature’s front liners” and “stop destructive projects that aggravate our country’s ecological, climate, and human rights crises.”

“The plight of environmental defenders will only get worse under Duterte’s rule. President Duterte continued to appoint the likes of retired generals Antonio Parlade and Debold Sinas to critical positions in government despite their atrocious human rights track records,” Dulce added.

In 2019, amid increasing cases of forest rangers being killed in the line of duty, DENR floated the idea of arming these environmental officers.

“Arming environment defenders is not the solution. Rather, it would only complicate the complex situation they are facing. Communities are already subjected to attacks and then you would add even more weapons?” said Kalikasan PNE.

In both chambers of Congress, there are still several pending bills calling for the creation of a permanent enforcement bureau under the DENR which will enforce environmental laws. They remain pending.