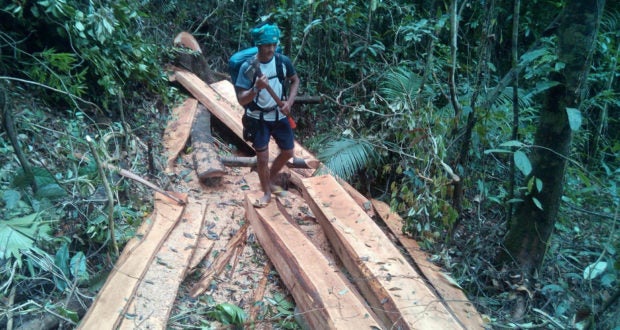 DANGEROUS PLACE The Philippines remains among the most dangerous countries for environmental defenders, according to Global Witness. Calls to arm forest rangers have been met with concern by environment groups. —PHOTO FROM COMMUNITY ENVIRONMENT AND NATURAL RESOURCES OFFICE-REAL

MANILA, Philippines — While Congress is deliberating on several bills creating a permanent agency to enforce environmental laws, especially against wildlife poaching and illegal logging, the Department of Environment and Natural Resources (DENR) has formed an interim office to perform such crucial function.

“Our department has many laws to implement, but we are lacking when it comes to enforcement,” Environment Undersecretary Jonas Leones said in a statement on Sunday.

A DENR administrative order, which was signed by Environment Secretary Roy Cimatu last week, established the Environmental Law Enforcement and Protection Service (Eleps) and aimed to strengthen the implementation of environmental laws in the country. The office will be under the environment chief.

Eleps will arm its officers to enforce all environment and natural resources laws, and coordinate with other law enforcement agencies, such as the Department of Justice, the Philippine National Police, the Armed Forces of the Philippines and the National Bureau of Investigation.

The DENR said the scope and function of the new unit would be bigger and wider than those of the current Environmental Protection and Enforcement Task Force, including operational control of enforcement units of the department’s regional, provincial, and community offices and bureaus.

“Through Eleps, enforcement officers will be able to conduct intelligence operations, issue notices of appearance for investigation, as well as implement cease-and-desist orders, closure orders and notices of violations,” the DENR statement said.

Several bills calling for the creation of a permanent enforcement bureau under the DENR are pending in both chambers of Congress. These gained ground following the murders of several government environment workers and forest rangers in recent years.

In March, the House committees on government reorganization and on natural resources jointly heard four measures, namely House Bills Nos. 6973, 7873, 7670, and 8028, that seek the creation of the Environmental Protection and Enforcement Bureau (Epeb).

Under HB No. 6973, authored by Deputy Speaker Loren Legarda, the proposed agency is expected to establish a forensic laboratory, as well as an environment and natural resources law enforcement academy which will be responsible for the recruitment, development and conduct of basic and advanced environmental law enforcement training courses.

It may issue cease-and-desist orders even without judicial orders. Those who assault or intimidate environmental law officers and deputies will be charged under the Revised Penal Code.

In the Senate, two counterpart bills on the Epeb creation have been filed by Senators Nancy Binay and Ramon Revilla Jr.

Cimatu has expressed support for the measures, saying the bureau would establish a strong institution to focus on going after environmental law violators, like wildlife poachers and illegal loggers.

The Philippines remains among the most dangerous countries in the world for environmental defenders, according to conflict and corruption watchdog Global Witness.

Its latest report showed the country as the deadliest in Asia for land and environmental defenders in 2019, with 43 persons killed, including land defenders, activists, and state government workers.

Environment groups, however, expressed concern over calls to arm forest rangers, saying this could lead to abuse.

The government should instead look into the drivers of environmental crimes, such as corruption and poverty, said Kalikasan People’s Network for the Environment.

Read Next
Inquirer receives Rotary Club of Manila’s Pro Patria Award
EDITORS' PICK
SMDC’s Bloom Residences: A master planned community that cares for your health and wellness
COVID-19 cases in PH pass 3.2 million mark with 37,154 new cases — DOH
Over 3 Million worth of prizes to be won at Smart Padala’s SENDali Manalo Promo!
Upsilon, Unilever give ‘real talk’ on climate change crisis
What to expect as Metro Manila starts ‘no vaccination, no ride’ policy on Monday
Metro Manila’s daily COVID-19 growth rate drops to 2% — Octa Research
MOST READ
Tito, Vic and Joey still not quitting, breaking trends as they celebrate 50th year in the biz
‘Not my loss’: Did Kris Aquino just comment on her breakup with Mel Sarmiento?
Wendell Ramos finally gets to hold his newborn for the 1st time
At least 1.04 million Metro Manila residents may have COVID-19 – OCTA Research
Don't miss out on the latest news and information.