PH ranks 1st in Asia, 3rd worldwide for most number of slain environment advocates in 2020

MANILA, Philippines —  The Philippines has again ranked first among Asian countries, and third globally, for the most number of killed land rights and environmental advocates in 2020.

Based on the report of Global Witness, an environment and human rights watchdog, 29 land rights and environmental advocates were slain in the Philippines last year trailing Colombia and Mexico, with 60 and 30 deaths, respectively.

In Asia, the Philippines was followed by India with four deaths and Indonesia with three deaths last year.

Colombia, Mexico, and the Philippines are the three countries that makeup half of the total recorded number of environmental defenders killed in 2020, 119 of 227, according to Global Witness. 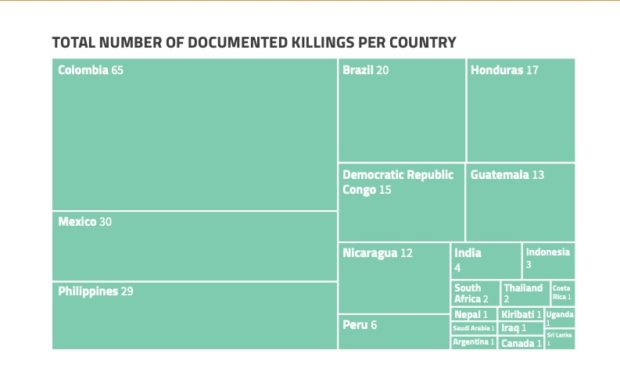 From the 2020 Global Witness report titled Last Line of Defence

The think tank branded the massacre of nine Tumandok indigenous people who had been resisting a mega-dam project on the Jalaur river in Panay during a joint police and military operation as “the most shocking” incident in the Philippines last year.

READ: ‘We were all asleep’: Tribal leaders say no villager was armed when cops, soldiers killed 9 in IP communities

“President Duterte’s years in office have been marked by a dramatic increase in violence against defenders. From his election in 2016 until the end of 2020, 166 land and environment defenders have been killed – a shocking increase for a country which was already a dangerous place to stand up for the environment,” the Global Witness said in its report.

Global Witness also linked the deaths to the “deteriorating human rights situation” in the Philippines which received condemnation across the globe, including from the United Nations, European Union, and the US government.

“In the Philippines, opposition to damaging industries is often met with violent crackdowns from the police and military. In our data, over half of the lethal attacks were directly linked to defenders’ opposition to mining, logging, and dam projects,” Global Witness said.

The group likewise pointed at Duterte for using the COVID-19 pandemic to further crackdown on dissent.

“The government also took advantage of the pandemic to rush through the Anti-Terrorism law, which came into effect in June. Critics argue that this will accelerate ‘red-tagging’ – labeling activists and social leaders as communist rebels – and will lead to an increase in violence against environmental and indigenous defenders,” it said.

“The President has prioritized mining for economic recovery from the pandemic – allowing the industry to operate throughout 2020, as well as recently reversing a ban on open-pit mining,” it added.

Worldwide, Global Witness said 2020 is “the most dangerous year on record for people defending their homes, land and livelihoods, and ecosystems vital for biodiversity and the climate.”

The Global Witness full report titled the Last Line of Defence can be accessed and downloaded at this link.