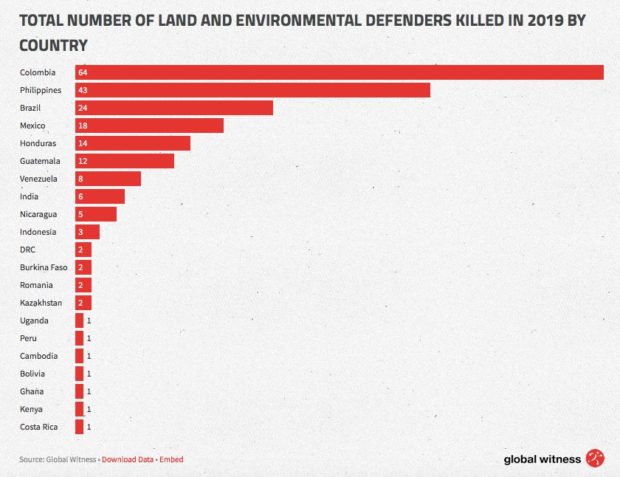 In a report posted on its website Wednesday, Global Witness revealed it has recorded a total of 212 land and environmental defenders killed in 2019, the highest number of registered murders of such defenders in a single year.

“Shockingly, over half of all reported killings last year occurred in just two countries: Colombia (peaking at 64) and the Philippines (rising from 30 in 2018 to 43 in 2019). Globally, the true number of killings was likely much higher, as cases often go undocumented,” said the watchdog.

“These killings include the murder of Datu Kaylo Bontolan, murdered in the Philippines after opposing illegal mining in the area. A Manobo leader, he was one of many indigenous people killed in 2019, asserting their right to self-determination and protecting their ancestral lands from those looking to exploit their natural resources,” it added.

According to Global Witness, the Philippines “has become even deadlier for activists since 2018, having been consistently named one of the worst places in Asia for attacks against defenders.”

It noted that the situation in the country even became worse in 2019.

“The relentless vilification of defenders by the government and widespread impunity for their attackers may well be driving the increase,” said the international NGO.

An average of four defenders have been killed every week since the creation of the Paris Climate agreement in December 2015, while countless more are silenced by violent attacks, arrests, death threats or lawsuits, according to the organization.

The report also showed that mining was the deadliest sector globally with 50 defenders killed last year.

The Philippines has logged the highest number of mining-related deaths, with a total of 16 people killed.

According to the NGO, Asia has consistently been “one of the worst regions” for attacks related to agribusiness, which has long driven the attacks against environment and land defenders.

In 2019, over 85 percent of recorded agribusiness-related attacks happened in Asia. Of these, almost 90 percent were documented in the Philippines.

Rachel Cox, campaigner at Global Witness, said in a statement that agribusiness and oil, gas and mining have been consistently the biggest drivers of attacks against land and environmental defenders. She added these are also the industries pushing the world further into runaway climate change through deforestation and increasing carbon emissions.

“Many of the world’s worst environmental and human rights abuses are driven by the exploitation of natural resources and corruption in the global political and economic system. Land and environmental defenders are the people who take a stand against this,” said Cox.

“If we really want to make plans for a green recovery that puts the safety, health and well-being of people at its heart, we must tackle the root causes of attacks on defenders, and follow their lead in protecting the environment and halting climate breakdown,” she also said.

The report likewise showed that one in 10 defenders killed in 2019 are women. It noted that female defenders face specific threats, including smear campaigns often focused on their private lives, with explicit sexist or sexual content.

Sexual violence is also used as a tactic to silence women defenders, most of which is underreported, according to the NGO.

INQUIRER.net is still awaiting the Philippine National Police’s statement regarding the report.