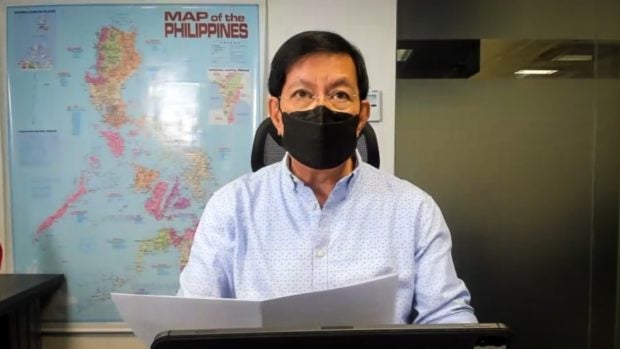 Citing from the Government Procurement Policy Board, Lacson noted that Pharmally was awarded at least seven contracts amounting to over P8.6 billion in 2020.

“If we add the computations of Senators Franklin Drilon and Richard Gordon, it could reach P12 billion,” he added, noting that Pharmally only has over P600,000 in paid-up capital when it secured its first deals from the Department of Budget and Management-Procurement Service (DBM-PS) last year.

During Monday’s Senate blue ribbon committee hearing, Gordon presented a table of awarded contracts to Pharmally, which showed that over a total of P11.486 billion was given to the firm from 2020 to 2021.

These contracts included the procurement of test kits and personal protective equipment sets (PPEs) as well as face masks and shields.

Lacson noted that this amount is a huge chunk of the P42 billion the Department of Health had transferred to the DBM-PS to procure the items last year.

He then requested Pharmally president Huang Tzu Yen as well as director and supply chain head Linconn Ong to submit to the committee official records showing how many contracts Pharmally bagged, and how much were involved.

This after Ong said their records showed that Pharmally may have gotten some P11 billion worth of government deals.

“Just make sure you base your figures on official records,” Lacson reminded Pharmally.

A “big part” of Pharmally’s contracts with the government involved P3.82 billion for two million PPE sets which the firm bought for P1,150 per set and sold at P1,910 for a profit of P760 per set—a total of at least P1.5 billion, according to Lacson.

“Kaya kailangan tingnan kung na-defraud ba ang government or taxpayer sa pakikipag-deal ng PS-DBM [We should see if the government or the taxpayer was defrauded by the dealings of PS-DBM],” he said in a separate interview on dzBB.

Lacson pushed for an accounting of DOH’s transfer of P42 billion to the DBM-PS, a large part of which, he said, involves loans that will have to be paid by future generations of Filipinos.

“Babayaran yan ng mga kaapu-apuhan. Di ba dapat tingnan natin kung maayos ang paggastos ng pera ng bayan [The loans will be paid by our grandchildren. Are we not duty-bound to at least make sure the public funds are spent properly]?” he said.

Lacson further lamented the government’s supposed favoring of imported supplies when local suppliers had been willing to address the requirement for such medical goods.

“Kaya lumaki ang issue kasama na rin yan. Bakit pabor na pabor sa importer samantalang may namumuhunan na rito [One reason why this issue grew so big is that why is the government favoring importers when local entrepreneurs are willing to produce the needed supplies]?” he said.

Huang has denied that Pharmally’s transactions with the government were tainted with corruption.

Huang maintained they were not favored in any way in the government’s procurement of medical supplies in 2020, saying the firm has been “unfairly prejudged.”

“I would like to reiterate that PPC (Pharmally Pharmaceuticals Corp.) went through the proper process. I don’t believe we were favored in any way,” Huang said in a statement over the weekend.

“In fact, PPC lost 12 times in the previous bids that it made. We just kept trying. We were only hoping to help and we saw it as an opportunity to hit two birds with one stone,” he added.

The Senate blue ribbon committee, which is looking into the government’s pandemic response purchases, will conduct a seventh hearing on Friday.