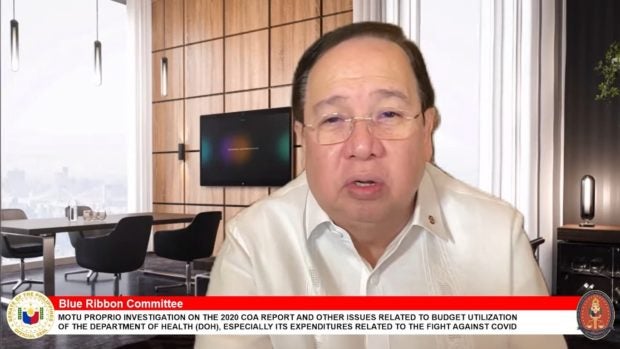 MANILA, Philippines — Several senators on Tuesday lamented how a Filipino manufacturer suffered losses in supplying face masks to the government when a “favored” firm bagged the bulk of contracts with a higher unit price.

(You are being cheated by the government. I’m saying here, you’ve been cheated.)

(The Filipino corporation incurred losses, took risks to retool its factory…when another company scored big. Survival of the greedy. I have to make that comment because what was done to you was disgusting.)

Before this, Gordon presented a chart showing the face mask purchase of the Department of Budget and Management-Procurement Service (DBM-PS) at the height of the pandemic in 2020.

The chart showed that the DBM-PS awarded a 100-million piece contract to local manufacturer EMS Components Assembly on April 27 last year at P13.50 per unit.

In contrast, Pharmally Pharmaceutical Corp. bagged three separate contracts to supply a total of 12.9 million units of face masks with a price tag ranging from P22.50 to P27.72.

According to EMS Components Assembly chief executive Perry Ferrer, they were able to deliver 25 percent or 25.8 million pieces of face masks at P13.50.

But the delivery of the rest of the 100 million units was delayed, Ferrer said.

“Our deliveries were pushed back every day…The reason was inventory, not enough space in the warehouse,” he added.

Ferrer said EMS was forced to lower its unit price from P13.50 to P2.35 to be able to deliver the remaining 75 percent—or 74.1 million pieces—of its 100-million contracted quantity.

“It is P1.3 billion [for the] total original contract but at the end after shipping 100 million units of face masks, the total sales only was P523 million. It was far from the P1.3 billion,” Ferrer said.

“Nalugi kami (We were bankrupt.),” he added.

According to Ferrer, EMS was among the local companies tapped by the government to retool their factories to manufacture medical-grade surgical face masks in the first months of the pandemic.

“I believe it was our duty as a Filipino company because it is the government who requested. The employees, our employees here, we didn’t know how far this COVID was gonna go but we knew we were entering into a war,” Ferrer said.

“It is our duty as a Filipino company to contribute even just a little bit, and our management team and our supportive board of directors agreed to repurpose, retool a section of our factory close to 18,000 square meters to produce medical-grade face masks,” he added.

The EMS’ April 2020 contract with the DBM-PS was its first and last one with the agency.

Former DBM-PS head Christopher Lao explained that the reason EMS had to lower its price to P2.35 was due to the government’s price-freeze on face masks.

“EMS was a big help…We had a problem when it started in October, kasi biglang nagpalabas si DOH (Department of Health) ng [when the DOH released a] prize freeze at P9,” Lao told senators.

He said that if the DBM-PS procure the face masks manufactured by EMS at P13.50 apiece, the cost would be above the P9 price ceiling.

(The problem is during that time, the price ceiling is low, our contract with EMS was high for that…We asked them ‘If you’re willing, if the price drops, we should also drop the cost otherwise we will be accused [of overpricing]. EMS agreed.)

Still, Gordon pointed out that the DBM-PS still purchased P22 to P27 worth of face masks from Pharmally.

(There is still P2.3 billion to be paid to Pharmally for contracts for 2021, so we should not divert the discussion…If it’s still in the first three to four months of the pandemic, I may still understand.)