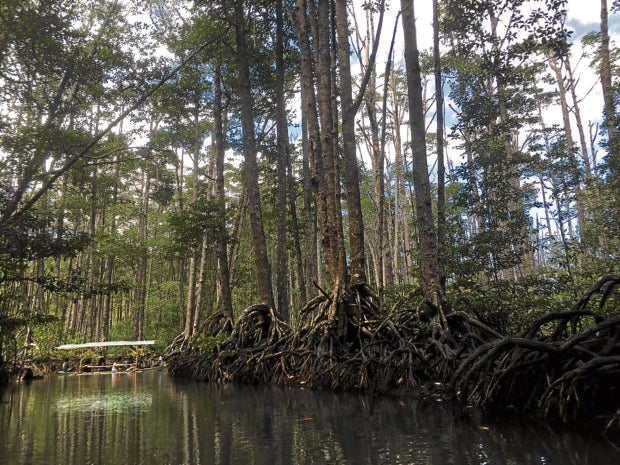 MANGROVE TOUR Puerto Princesa City’s mangrove forests, like this ancient patch in the coastal village of Sabang that is popular to visitors, are protected by environmental laws from commercial exploitation. Environment personnel and communities in Palawan province have been joining hands in guarding their coastal and forest resources from poachers and illegal settlers. —ROBERT JAWORSKI L. ABAÑO

MANILA, Philippines — A top environment official has asked Congress to hasten the passage of a law creating an enforcement bureau under the Department of Environment and Natural Resources (DENR) that would arm forest rangers and ensure their safety.

Environment Undersecretary Benny Antiporda, who is in charge of solid waste management and local government concerns, made the call after a group led by forest ranger Roldan Alvarez was allegedly harassed and arrested by a team led by Police Col. Marion Balonglong, then police chief of Puerto Princesa City in Palawan province on June 10.

“We need to help and arm our forest rangers. This is not for them to hurt or kill but to serve as a deterrent to environmental law violators,” said Antiporda, citing a number of forest rangers killed in recent years.

In an interview aired on Monday over radio station dzBB, he said “it is difficult to enforce (environmental laws) without the power to enforce.”

Three Community Environment and Natural Resources Office foresters, four forest rangers and a forest protection officer, along with two barangay watchmen, went to the area to investigate reports of illegal occupation and massive mangrove cutting when they were accosted by Balonglong and his men.

Antiporda said the eight DENR men were ordered to lie face down on the ground and were handcuffed. Alvarez was reportedly kicked or slapped each time he answered a question.

“Balonglong declared that the galvanized sheets used to fence the lot were his. He accused the forest rangers of stealing them,” the DENR official said. According to information received by the DENR, Balonglong was claiming a section of the mangrove reserve.

Presidential Proclamation No. 2152 (series of 1981) declared all mangrove areas in Puerto Princesa as part of the mangrove swamp forest reserves, which bans private use and conversion of these areas, Antiporda said.“The classification of the area is timberland, which meant it should remain an open space and nobody should live there,” said Alex Hermoso, program manager of the city’s antisquatting program.

He said the city government had already ordered the demolition of structures in Sitio Bucana.

Police Col. Sergio Vivar Jr., who replaced Balonglong, vowed to enforce “internal cleansing” in the city police and to punish policemen involved in cases of harassment and maltreatment.

The Mimaropa (Mindoro, Marinduque, Romblon and Palawan) regional police office has already started to look into the June 10 incident. Another probe will be conducted by the National Police Commission, said Denise Pampo, its provincial head.

“The instruction of our regional director, lawyer Owen de Luna, is to conduct validation of all the reports that came out and conduct a separate investigation of the incident. [But] we haven’t received any complaints yet,” Pampo said.

Antiporda said the DENR would file charges against Balonglong this week.