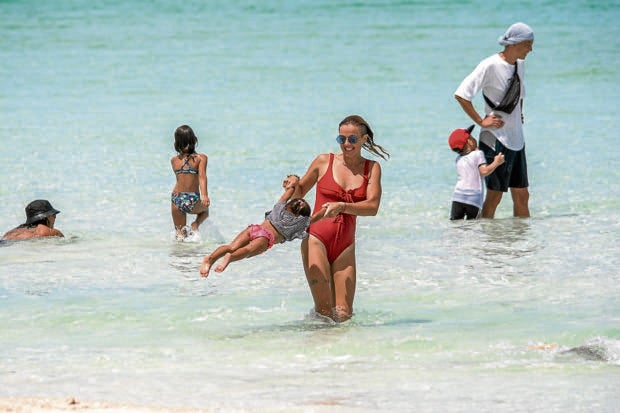 SUMMER DIP Residents and stranded tourists enjoy Boracay’s clear waters when local officials, on June 1, lifted the swimming ban imposed when the island was put on lockdown to prevent the spread of the coronavirus. —JACK JARILLA CONTRIBUTOR

ILOILO CITY, Iloilo, Philippines — The reopening of Boracay Island to local tourists after months of lockdown on Tuesday was marred by the confirmation that a female employee of the Bureau of Fire Protection (BFP), who tested positive for the new coronavirus disease (COVID-19), stayed on the island a day before the result was released.

Health personnel are scrambling to locate, isolate and monitor at least 28 people on the island who had close contact or were in close proximity to the 26-year-old employee of the BFP Western Visayas office.

The local government of Malay in Aklan province, which has jurisdiction over the island, is also confirming reports that BFP personnel, including the infected person, partied on the island.

The breach of protocol could heighten concerns of tourists going to the island, Bautista said in a press conference livestreamed on social media on Tuesday. “This can be considered economic sabotage,” he said.

After three months under lockdown, Boracay reopened this week to tourists from the provinces of Aklan, Antique, Capiz, Guimaras, Iloilo and Negros Occidental. Officials and business owners were hoping that tourists from the region would visit the island and help boost confidence for other travelers.

When reached by the Inquirer on Tuesday, Senior Insp. Stephen Jardeleza, the official designated by the BFP Western Visayas to speak on the issue, said his office would release a statement once its investigation was finished.

Madel Joy Tayco, spokesperson for the municipal interagency task force on COVID-19, said the employee was among the 28 BFP personnel who went to the island on June 11 and June 12.

The first batch arrived on June 11 in time for the visit of officials of the Boracay Inter-Agency Task (BIATF) force headed by Secretaries Roy Cimatu (Department of Environment and Natural Resources), Eduardo Año (Department of the Interior and Local Government) and Bernadette Romulo-Puyat (Department of Tourism).

The BFP employee who tested positive for COVID-19 was part of the second batch which arrived on June 12.

She and her companions left Boracay early afternoon on June 14, a day after the Department of Health in the region released test results of six new COVID-19 cases, including hers.

Tayco said 15 people considered close contacts of the infected person had already been identified and reached, and would be placed under isolation and observation. Fourteen others, including passengers of a motorboat that brought the BFP personnel to the island, were also being identified.

According to Bautista, the BFP employees said they were going to Boracay for a “conference,” apparently referring to the BIATF meeting.

But the group, the mayor said, was also involved in unauthorized activities while the community quarantine was in effect.

Dr. Marie Jocelyn Te, spokesperson for the DOH Western Visayas, said the infected BFP personnel was quarantined in a hotel in Iloilo City from June 6 to June 9, and had declared herself as a “local stranded individual” in Cebu.

She was asymptomatic and had tested negative in a rapid test, but her specimen was also subjected to a reverse transcription polymerase chain reaction (RT-PCR) test.

The BFP employee, reports said, left the hotel and transferred to the BFP regional office. She was supposed to undergo a 14-day quarantine and wait for the release of the RT-PCR test under health protocols.

The employee is now in an isolation center in Iloilo City. Several personnel of the city and regional offices of the BFP were also placed under quarantine.

Treñas said he would file complaints against the BFP personnel for violating quarantine protocols.