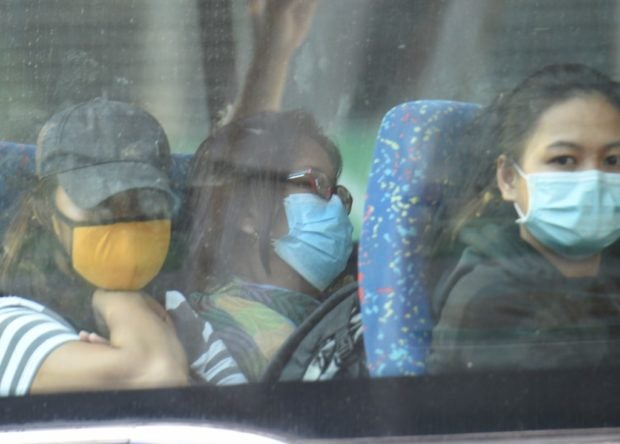 FILE PHOTO: Passengers wear face masks as they sit inside a bus in Manila on January 30, 2020. – The Philippines reported its first case of the virus on January 30, a 38-year-old woman who arrived from Wuhan and is no longer showing symptoms. She came to the Philippines on January 21, sought medical help four days later, and was admitted to the hospital for testing. (Photo by Ted ALJIBE / AFP)

MANILA, Philippines — The overpriced face masks and face shields bought by the Department of Budget and Management-Procurement Service (DBM-PS) for the Department of Health (DOH) merits an investigation, an activist group said on Thursday.

According to the Bagong Alyansang Makabayan (Bayan), the purchase done by DOH through the DBM-PS reeks of corruption, notably with the admission that face masks were purchased at P27 per piece and face shields at P120 per piece during the early months of the COVID-19 pandemic.

It is a pity, Bayan secretary-general Renato Reyes said, that some officials were trying to earn from the country’s COVID-19 response.

(The procurement done by DOH and the Procurement Service of DBM reeks of corruption.  This procurement seems overpriced due to the large disparity in prices.  They’re making a living out of the pandemic.)

(It is only right that all the procurements done by DOH and PS-DBM would be investigated, especially those related to the COVID-19 response. The emergency procurement of other agencies in relation to Bayanihan 1 and 2 should also be looked into.)

During the Senate blue ribbon committee hearing on Wednesday, DOH and DBM officials were grilled regarding the Commission on Audit (COA) report which marked several transactions and funds of the DOH for irregularities — including “deficiencies” worth P67.32 billion in the health agency’s COVID-19 funds last year.

COA’s audit report of DOH for 2020 showed that the deficiencies are caused by non-compliance with pertinent laws and regulations, leading to missed opportunities for the department primarily tasked with managing the pandemic.

The said issues cast doubt on the regularity of transactions, COA said.

In the same hearing, DBM officer-in-charge Tina Rose Marie Canda said that former undersecretary and DBM-PS head Lloyd Cristopher Lao justified the purchases because there was supposedly a lack of supply that drove the prices of protective equipment high during that time.

Canda said the executive committee of the DBM asked whether the amount of money would even be defensible as the private sector itself thinks that the prices are way too high.

Blue ribbon committee chairperson Senator Richard Gordon — who also chairs the Philippine National Red Cross — revealed that they were able to purchase face masks for only P5 apiece and face shields for just P15 each in the same period when the DBM-PS made its procurements.

For Bayan, questions abound regarding the resignation of Lao and recently, Budget Secretary Wendel Avisado.  There were talks that Avisado’s resignation was not really for health reasons as it was allegedly because of corruption issues in the DBM that he was not aware of.

(Why did the former head of the PS-DBM, Lloyd Christopher Lao, resign last June?  Does former DBM secretary Wendel Avisado who resigned this August know something about this?)

(The picture being painted now is that the Duterte regime is taking advantage and earning from the pandemic. There is large-scale corruption happening and details of the questionable procurement should be revealed. It is really untrue to say corruption does not exist in this government.)