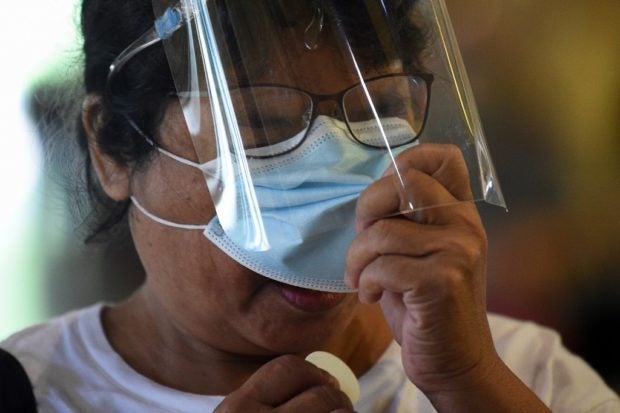 FILE PHOTO: In this photo taken on September 2, 2020, a Catholic woman lifts her face shield and mask as she receives communion during a mass inside a church in Manila. (Photo by Ted ALJIBE / AFP)

MANILA, Philippines — The name of Lloyd Cristopher Lao, resigned head of the Department of Budget and Management-Procurement Service (DBM-PS), resurfaced during Wednesday’s Senate inquiry where lawmakers questioned the “overpriced” face masks and face shields purchased by the Department of Health (DOH).

During the Senate blue ribbon committee hearing, some senators quizzed government officials regarding the purchase of face masks and shields at a “very suspicious price” with Senator Imee Marcos raising that the cost of face masks and face shields that DOH bought through DBM-PS were at P27.72 and P120 per piece, respectively, in early 2020.

In response to the senators’ concerns, Director Paul Guimbarda of the DOH Procurement Service said there has yet to be a suggested retail price (SRP) for these items at the time they were procured.

“So when we conducted the procurements…we were looking at the reasonable price existing at the time,” Guimbarda told the Senate.

But Drilon pointed out that even if there was limited supply at the time, the amount was still “way overpriced.”

He cited a memorandum released by the DOH in September 30 last year, providing for an SRP of P2 to P5 for face masks and P26 to P50 for face shields.

“Ang laki ng overpricing,” said Drilon, and subsequently asked who was the head of the DBM-PS when these items were purchased.

Senator Francis Pangilinan interjected and confirmed that the Senate conducted in 2020 a probe into “overpriced” medical supplies, where Lao was a resource person.

Canda also said that the DBM executive committee had already raised questions over the price of the face masks and shields.

“I just knew at the time that it was all from China because we had a meeting on it and if I recall, the executive committee asked the question on whether the amounts for the face shields, face masks and other PPE (personal protective equipment) would be defensible because some people from the private sector are saying that it’s expensive,” she told senators.

“That’s what I recall…that was the question na ‘yan po ‘yung tinanong namin noon kay Usec. Lao. And he said, at that point, na because there were limited items in the local market, the amounts he presented were defensible. So I left it at that, I did not ask more questions,” she added.

Senator Richard Gordon, chairman of the Philippine Red Cross (PRC), likewise said he was “astounded” of the pricing of the procured face masks and shields.

Gordon, who was leading the Senate inquiry, asked Canda for all records of the transactions which involved Lao.