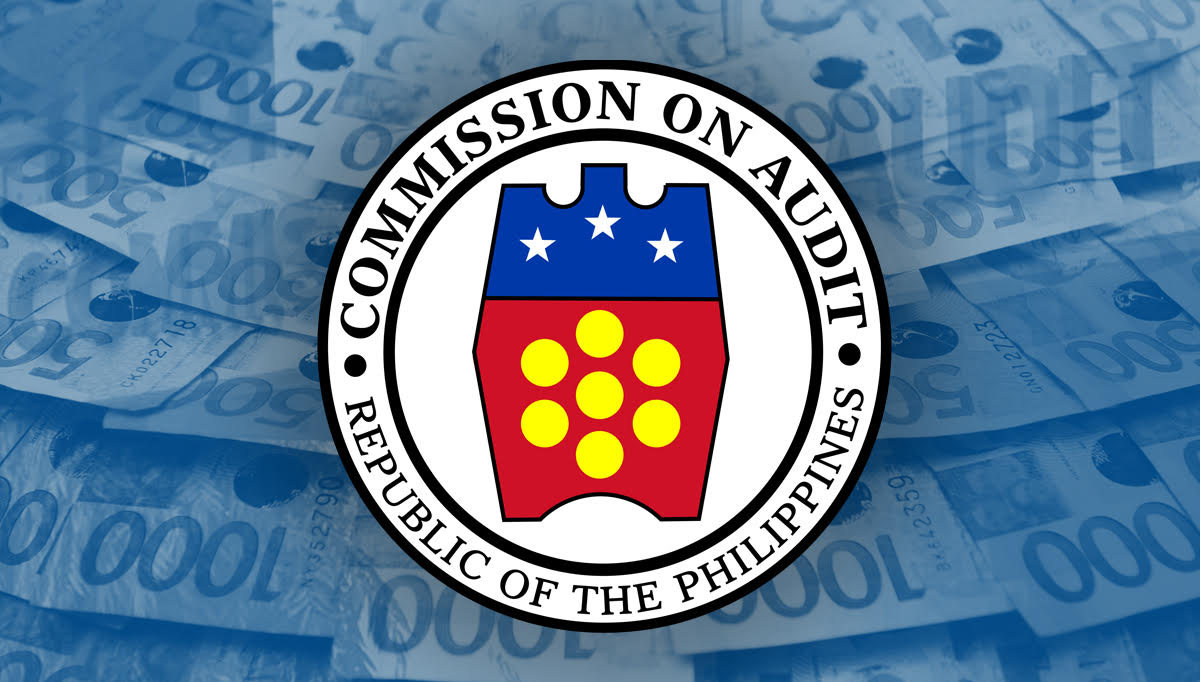 The Commission on Audit (COA), the Philippine government’s independent spending watchdog, has been busy lately planting red flags—not the ones associated with communism but ones that say there’s something wrong, or amiss, with finance handling by government agencies.

The string of reports available to the public on the COA website prompted a flood of comments from netizens commending the audit agency. 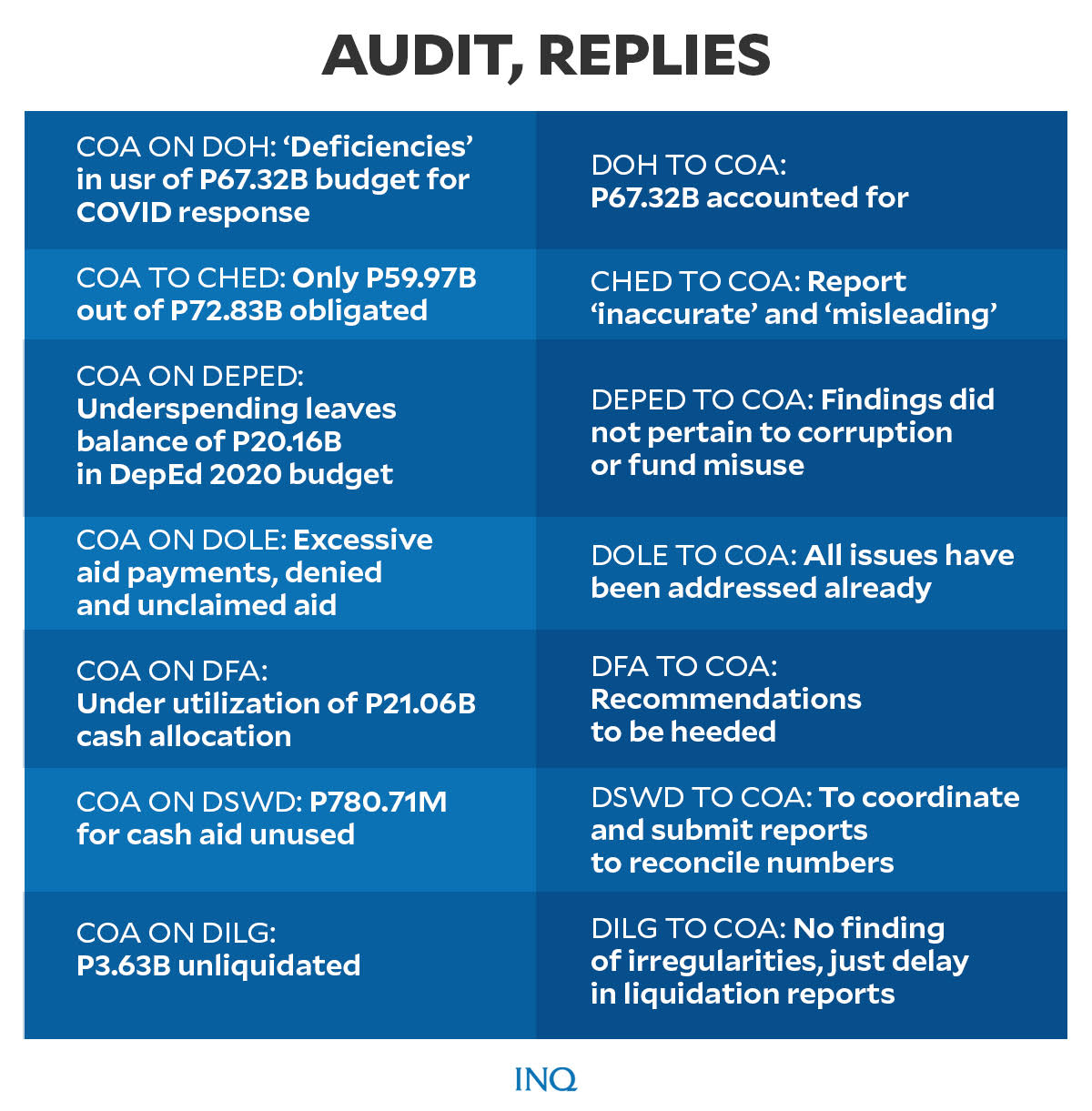 While generally not concluding that there was corruption, the COA annual audit reports of the agencies showed deficiencies in the use of public funds which drew irate reactions from netizens who said it was a “betrayal” of the people hurting from the impact of COVID-19.

Last week, the COA said that it found deficiencies in the use by the DOH of P67.32 billion of its budget intended for COVID response.

The COA audit report said deficiencies contributed to challenges and missed opportunities by the DOH amid a national emergency. The findings, the COA added, “cast doubts on the regularity of related transactions.”

Among other findings, COA found irregularities in the acquisition process and lack of documentation in several contracts. At least P66.28 million was flagged because of noncompliance with laws and rules on spending.

COA also called out the DOH for P95 million in expired or expiring medicines.

In reply, the DOH said the P67.32 billion is all accounted for and spent on medical kits and salaries for health care workers.

“The DOH acknowledges the findings concerning these funds, and is currently addressing the said compliance issues and deficiencies,” the DOH said.

“We take our COA findings very seriously and have been working to further improve our processes and controls so that we can serve the public most effectively,” it added.

State auditors also said out of P3.3 billion received by CHEd from Bayanihan 1, only P1.3 billion was obligated in 2020.

The P3.3 billion was for the Smart Campus Development program for state universities and colleges where subsidies are earmarked for a program called Bayanihan 2 for Higher Education Tulong.

In its reply, CHEd shouted at COA for being “inaccurate” and “misleading.” It said the use of funds from Bayanihan 2 had been extended to June 30, 2021.

CHEd said upon the expiration of Bayanihan 2, P297,540 of funds for subsidy had been released and benefited 60,782 students.

For the online learning budget, CHEd said it obligated P2.10 billion and had disbursed P2.96 billion which resulted in “99 percent utilization rate.”

COA said that it observed “unresolved variances and huge discrepancies” of P40.89 billion in accounting records and supporting documents which affected the reliability of DepEd financial statements.

The COA audit report also said it could not ascertain and doubted P4 billion in disbursements because of lack of supporting documents, among other reasons.

In its reply, the DepEd said it wants to “emphasize that none of the initial findings pertained to corruption, malversation of public funds, negligence or betrayal of public trust.”

“The nature of the observation issued by the commission is a way for the audited agency to rectify deficiencies and improve the management of its budget through the former’s recommendation,” the DepEd added.

Department of the Interior and Local Government (DILG)

The DILG was called out by the COA for P3.63 billion in “unliquidated fund transfers” to several government offices, local governments, and non-government organizations.

Unliquidated funds, according to the COA audit report, were because of failure to submit liquidation reports by implementing agencies and submission of fund transfer reports without supporting documents.

The COA report noted that the central office of DILG had P372.45 million unliquidated funds while P56.43 million and P4.51 million were transferred to Procurement Service-Department of Budget and Management and the Department of Public Works and Highways last year despite outstanding balances and the prior submission of liquidation documents.

“We wish to emphasize that the COA has no findings that these funds were misused in any way and that the findings merely relate to the non-submission of liquidation reports or incomplete documentation,” said the DILG.

The DILG added that regarding fund transfers to LGUs, the department is now in the process of locating and retrieving documents from the concerned LGUs for submission to the COA.

Department of Labor and Employment (DOLE)

DOLE was flagged by COA for the “insufficient internal control measures” in granting aid to workers impacted by the COVID-19 health crisis. It said that it led to excessive payments, denied claims and unclaimed cash aid in money remittance centers.

DOLE said that it used P7.27 billion of its P7.31 billion budget for the three assistance programs, but COA said that it observed several deficiencies, such as P1.023 million in multiple payments of cash aid.

In a statement, the DOLE said it adheres to government regulations in using public funds, saying that this can be proven by consecutive “unqualified” audit opinion given by COA for 2019 and 2020.

Regarding the P1.57 billion in unliquidated cash advances that was called out by COA, the DOLE said that 62 percent—or P974.51 million— pertains to the central office and that as of July 31, 2021, it was reduced to P216.30 million or a settlement rate of 78 percent.

READ: Solon urges DOLE to probe its own deficiencies flagged by COA

“The issues on the alleged excessive payments, denied claims and unclaimed assistance were already addressed initially by the DOLE by way of management comments,” it said.

The COA audit report said that the improper handling and custody of seized assets expose the forest products to the risk of loss because of custodial lapses while awaiting final disposition.

It also noted that confiscated equipment worth P56.80 million was left idle because of lack of a disposition plan which resulted in wasted resources.

However, the DENR’s Forest Management Bureau said that it should not be blamed for the “poor handling” of confiscated forest products, asserting that those should be turned over to the DepEd.

COA said DFA was not able to maximize the use of the cash allocation that it received for 2020 worth P21.06 billion which resulted in the return of P8.29 billion, or 39.39 percent, to the Treasury.

DFA was likewise called out for failure to reconcile ledgers of accounts containing P350.76 million.

The DFA, in reply to COA, said it agreed with recommendations to strengthen its cash programming and management systems. It also agreed to a review and to revisit its targets to match a practical budget. The DFA also agreed to closely monitor implementation of all its programs.

In its report, COA called out the DSWD because its P780.71 million budget for cash assistance was not used, affecting 139,300 qualified Filipino beneficiaries. COA said that the department had “deficiencies” worth P5.46 billion.

COA stated that the fund was not utilized because of “insufficient validation process”, especially in DSWD’s regional offices in Cagayan Valley, Central Visayas, Eastern Visayas and the Cordillera Administrative Region.

In reply to COA, the DSWD agreed to coordinate and submit reports on time to accounting units, support recording of all transactions and conduct regular book reconciliation in accordance with accounting rules.

The audit agency also called out the Civil Aviation Authority of the Philippines (CAAP) for completing only 16 out of 86 airport projects, worth P9.88 billion, from 2016 to 2018.

However, CAAP said it was able to “effectively implement 55.69 percent or 46 of 83 identified airport projects with an aggregate cost worth P4.64 billion for the initial implementation of the projects covered for 2015 to 2018 with a programmed amount worth P9.90 billion.”

In a statement “to set the record straight,” the DOTR said the license plate delay was from a contract signed in 2014 yet during the Aquino administration.

In 2015, the DOTr said, the payment to the supplier of the license plates was “disallowed by COA” which contributed to the delay in deliveries.

“Due to the COA disallowance, the payment to the supplier had to be suspended, which led to the stoppage of the production and delivery of the license plates from the LTO,” the DOTr said.

On top of the COA disallowance, the Supreme Court also issued a TRO against the distribution of the license plates “following a scrutiny by several lawmakers.”

“When the Duterte administration took over in 2016, the government was confronted with the production and distribution backlog of millions of license plates,” the DOTr added.

COA said that 61.59 percent, or P1.25 million of the total received cash allocation of P2.03 million, was used “indicating low utilization of its fund releases.”

State auditors noted that the non-collection of training commitments and development assistance from service contracts worth P907.86 million and P202.02 million “deprived the DOE and the government” of technical and financial assistance.

Land Transportation and Regulatory Board (LTFRB)

The LTFRB was called out by COA for using only 1.07 percent, or P59 million of its P5.58 billion budget, for a program to help public utility drivers impacted by the COVID-19 health crisis through the Service Contracting Program.

However, the LTFRB said that as of June 30, 2021, the day the Bayanihan to Recover as One Act expired, the office had already released 26.55 percent of the funds for the Service Contracting Program.

The COA noted that the PCSO, even without a contract, paid P154.21 million to the People’s Television Network, Inc. for airtime and production of lottery draws which, COA said, was contrary to provisions on agency-to-agency procurement under the Government Procurement Reform Act.

The PCSO explained that payments made to the People’s Television Network Inc. were based on a board resolution in 2020 “which approved the automatic renewal” of previous monthly payments.

The PCOO, led by Martin Andanar, was called out by the COA for “massive” and “unrestricted” hiring of 375 contractual workers which led to “unnecessary spending” worth P71 million.

In an interview with ANC, PCOO Undersecretary Kris Ablan confirmed the hiring of the contractual workers but denied they were employed as political “trolls” for the Duterte administration.

Read Next
Taliban order fighters to respect foreigners in Afghanistan–official
EDITORS' PICK
A delightful blessing!
Gov’t plans to open COVID-19 vaccination for 5- to 11-yr-olds by January 2022
Gov’t eyeing COVID-19 vaccine booster for essential workers, indigents by Dec. 10
Villar Group gears up for AllValue Shopping Party on Dec. 3; around P 1-million promos and discounts up for grabs
Omicron variant detected in more countries as scientists race to find answers
Legarda: Ending Violence Against Women, a cause for all
MOST READ
Quiboloy warns of ‘much worse than Omicron virus’ if his ‘persecution’ is not stopped
Suspected Omicron cases mild, says leading S. Africa doctor
Bongbong Marcos’ conviction in tax case not a crime involving moral turpitude — lawyer
Marcoleta defends pol ads on ABS-CBN
Don't miss out on the latest news and information.