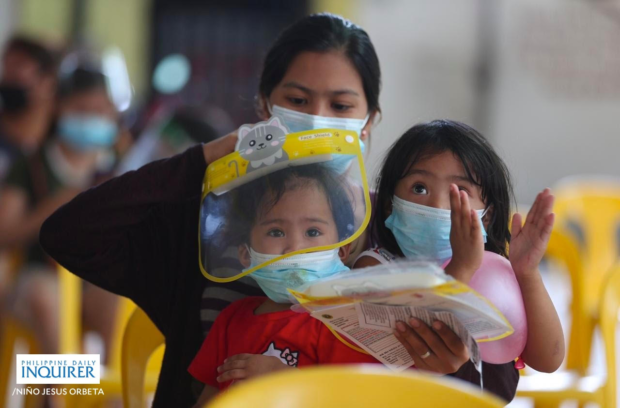 The challenge for parents to keep their children safe has grown during the pandemic. NIÑO JESUS ORBETA/FILE PHOTO/INQUIRER

MANILA, Philippines—July is Schools Safety and Accident Prevention Month which this year gained a different relevance as the COVID pandemic moved children from schools to homes where more sinister threats awaited them.

In 1966, the late dictator Ferdinand Marcos signed Proclamation No. 115-A to promote “safety consciousness” in the midst of “indisputable evidence of a considerable rise” of accidents in schools.

However, 54 years later, students were placed at “greater risk” because of the lockdown that forced them to stay at home for online learning as virus transmission shut schools down.

But home, in many cases, does not provide sanctuary to protect children and the youth from physical, sexual and online abuses, according to a 2015 National Baseline Survey on Violence Against Children in the Philippines.

This is why when the lockdown was imposed in March 2020, the United Nations International Children’s Emergency Fund (Unicef) said threats to children simply moved from campuses to homes at increased rates—maltreatment, gender violence and sexual exploitation.

READ: As pandemic led to crime decline, it also gave rise to abuses

“Movement restrictions, the closure of schools, loss of income, isolation, overcrowding and high levels of stress and anxiety are increasing the likelihood that children experience and observe physical, psychological and sexual abuse at home – particularly those children already living in violent or dysfunctional family situations,” Unicef said.

The study “No Education, No Protection: What school closures under COVID-19 mean for children and young people in crisis-affected contexts”, said that worldwide, because of the physical closure of schools, students “have lost an important space that offered them stability, even as the environment around them grew ever more uncertain.”

READ: Preventing minors from going outside violates their rights – Unicef

It emphasized that schools provided “interconnected” services to children, especially about their social, emotional, psychological, and physical health and wellbeing.

“A long lockdown kept many children from learning and put them at greater risk of online abuse, mental health issues and other activities that are important for their physical and emotional growth,” Unicef said.

The Commission on Human Rights (CHR) said in 2020 that children who experience violence are confined inside the homes they share with the individuals who violate them. 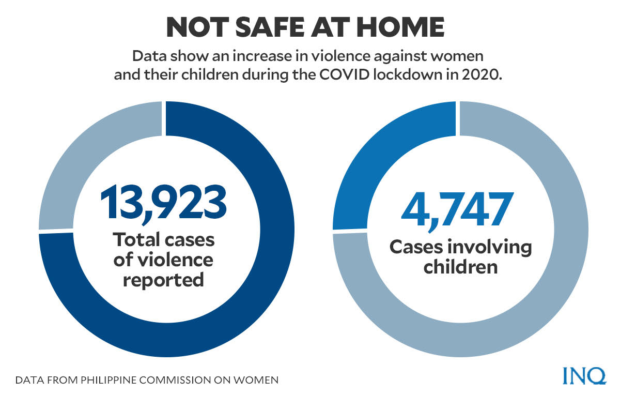 Cases of gender-based violence include violations of several laws in the Philippines:

As the COVID-19 lockdown and government failure to effectively shut the virus down further sank Filipinos already drowning in poverty, the group Save the Children Philippines (SCP) raised concern that children are at increased risk of online sexual abuse and exploitation.

Lawyer Alberto Muyot, Chief Executive Officer of SCP said, “Online sexual abuse and exploitation of children is a silent pandemic that has permanent, and devastating effects on children’s mental health and psychosocial wellbeing.” 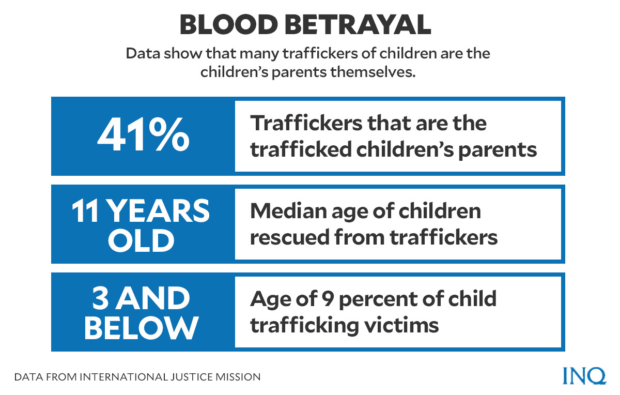 In many cases the predators that cause children harm are the same people that children look up to for protection, their parents.

A May 2021 report by the Philippine Center for Investigative Journalism said that a 31-year-old woman was arrested in January 2021 over allegations that “she had streamed live shows of her 8-year-old daughter and sent naked clips and photos of her 11-year-old son to paying customers abroad.”

It said that several tech companies reported more than 1.29 million images and videos of child abuse materials produced in the Philippines in 2020–a volume of images that is triple than the data reported in 2019. 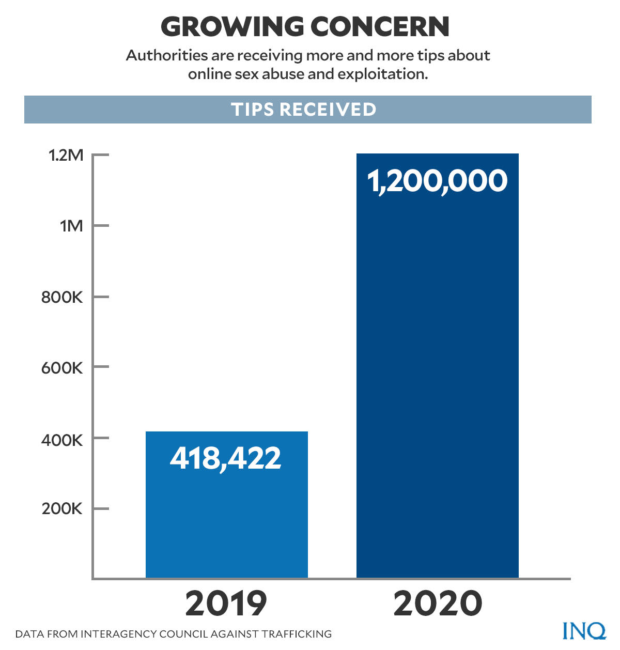 The Department of Justice, citing data from the National Center for Missing and Exploited Children, said that in three months in 2020 (March 1 to May 24), there were 279,166 cases of online sexual abuse and exploitation—a spike compared to the 76,561 cases in the same months in 2019.

Tips regarding online sexual abuse and exploitation, the Philippines’ Inter-Agency Council Against Trafficking said, rose to 1.20 million in 2020 – three times higher than the 418,422 reports in 2019.

In a study by the International Justice Mission, it was revealed that 41 percent of traffickers were parents, the median age of victims at the time of rescue was 11 years old and that 9 percent of the victims were below 3 years old.

Child and adolescent psychiatrist Dr. Mary Daryl Joyce Calleja said that the lockdown had “very difficult effects” on students, explaining that before the lockdown, children see the school as a place where they could be with friends aside from having a place to study.

This, she said, partly explains why there is a rise in mental health concerns since the beginning of the COVID-19 crisis.

“Before, if there are troubles inside the house, the school can be a place where they could have a sense of emotional and social support from friends and the people in school who are present physically,” she said.

In a release from the World Health Organization (WHO), the National Center for Mental Health revealed a “significant increase” in monthly hotline calls regarding mental health concerns.

It said that the number of calls rose from 80 per month before the lockdown to nearly 400 monthly in the midst of the COVID-19 health crisis.

Calleja said that even without concrete data, she can say that there was really an increase in mental health referrals, especially from teachers trying to help their students. 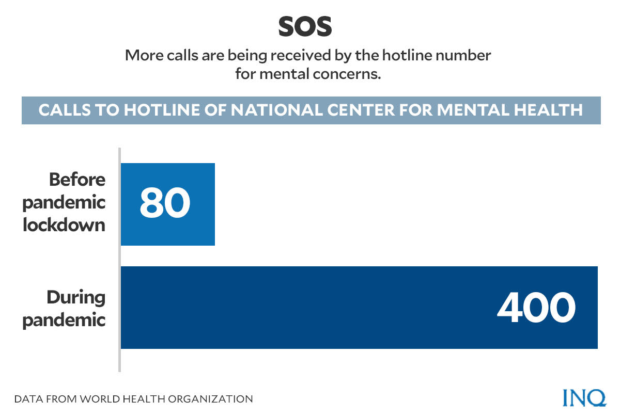 The WHO said that globally, the most at risk segment of the population is those aged 15-29 and that mental health-related deaths are also the second leading cause of deaths in that age group.

According to Calleja those who commit self-harm either do it as suicide or as a way to cope with the effects brought by the COVID-19 catastrophe.

“Those who get hospitalized for self-harm do it not only because of what is happening in the environment because it could also be something that is biological being on lockdown, being physically isolated is really hard, especially for students who are still adjusting with the effects of the crisis,” she said.

One of the more distressing impacts of COVID lockdowns was the rise in early pregnancies for women who are barely in their teens.

Latest data from the Philippine Statistics Authority showed that Filipino minors who gave birth in 2019 increased to 62,510 from 62,431 in 2018.

It said that the Philippines has recorded a 7 percent increase in births among girls aged 15 and below the year COVID-19 hit, but the lockdown could further increase teenage pregnancies in the Philippines.

“These adolescents have no decision-making power, economic independence, autonomy, and are considered by many countries as powerless,” the Commission on Population and Development said earlier this year.

“They face greater risks of repeat pregnancies and are vulnerable to gender-based violence as well as intergenerational poverty during and as a result of their early childbearing,” the commission said.

They added that the unmet need for family planning may also go up to 2.07 million cases by the end of 2020, a whopping 67 percent increase from 2019.

What should the gov’t do?

Filipino students face new threats and as they study outside the confines of schools, homes are considered part of places that should be included in Schools Safety and Accident Prevention.

To protect children from violence and exploitation, Unicef Philippines proposed the following:

• Establish child protection laws and policies based on international standards
• Improve the implementation of laws and actions that prevent and respond to violence against children at the national and community levels, including in humanitarian situations
• Build commitment from partners to plan and implement multisectoral actions to address violence against children
• Improve access to quality, responsive and inclusive child welfare services
• Promote a positive culture that discourages all forms of violence

For Calleja, educational institutions, led by the Department of Education and the Commission on Higher Education, should improve their mental health programs for the youth and school teachers.

Dr. Gloria Nelson of the Department of Science and Technology – National Research Council of the Philippines said that the surest way to prevent teen pregnancies is to “have programs and policies to make the youth stay in school so that through education they can improve their human capital, have access to reproductive health care, make informed decisions, and break away from intergenerational poverty.”