As pandemic led to crime decline, it also gave rise to abuses

MANILA, Philippines—The nine-month community quarantine prompted by the COVID-19 pandemic is being credited with a decline in crime volume but some experts expressed fear that the lockdown had aggravated abuses largely caused by restrictions on movement and scant resources.

Data from the Philippine National Police (PNP) showed that the volume of what the PNP said was eight focus crimes nationwide had dropped by 45 percent during the 275 days of COVID-19 lockdown enforcement. These included murder, homicide, physical injury, rape, robbery, theft, motorcycle theft and car theft. 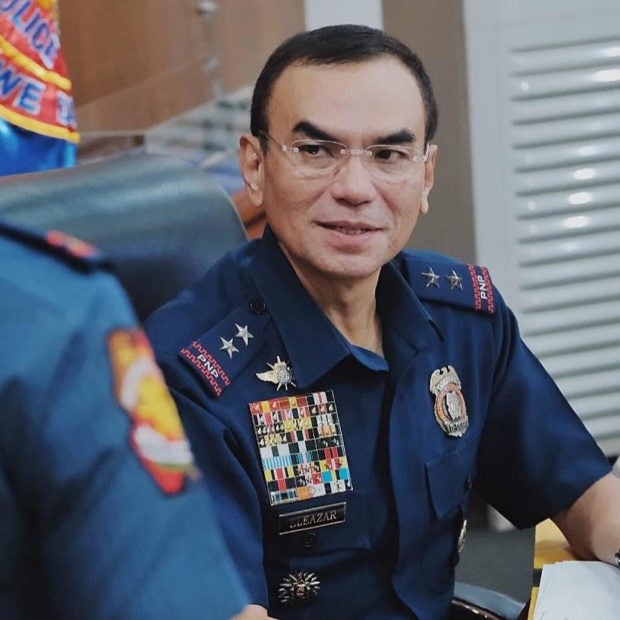 In a phone interview with INQUIRER.net, Lt. Gen. Guillermo Eleazar, deputy chief for administration of PNP, said crime volume during the pandemic was “lowest” because there were fewer people in the streets as the public was required to stay home to reduce, if not stop, the transmission of SARS Cov2, the virus that causes COVID-19 and which is spread mainly by humans.

“During the nine-month quarantine there is already a significant decrease because when we first started the lockdown status, there were not many people outside. It is a basic reason why it decreased,” said Eleazar in mixed Filipino and English.

The police official also noted that checkpoints at every border nationwide  helped in detecting criminal activities or arresting criminals. 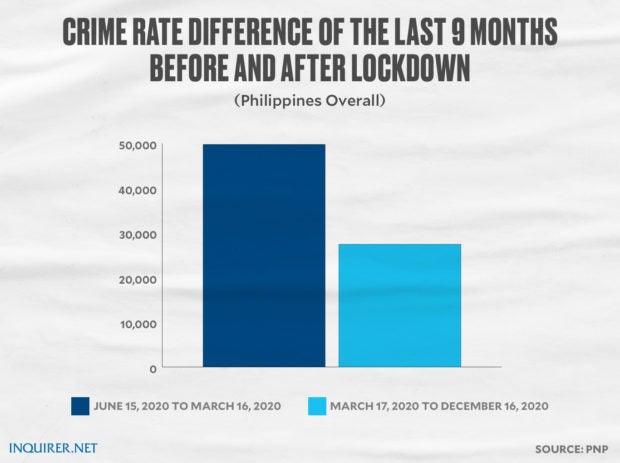 Highest drop in crimes vs property reported during lockdown

Since economic activities were halted during the health crisis, Eleazar underscored its effect on crime against property, which had the biggest decline among the eight crimes listed by the PNP.

“There is no economic activity, no people were going outside so what we saw is that, of all the eight focus crimes, the number of crimes against properties, such as theft, declined further compared with crimes against persons,” Eleazar said in mixed Filipino and English.

“We intensified our security because there is not much movement. Our policemen’s concern would be more on maintenance and order so we respond to that,” he added.

Comparing figures from pre-lockdown to quarantine implementation, the PNP said cases of motorcycle theft had the highest decrease with 61 percent, followed by robbery with 59 percent, theft with 57 percent and theft of motor vehicles with 52 percent. All these are considered as crimes against property.

It recorded a 40-percent decline of cases of physical injury from 8,546 before the lockdowns to 5,111 during community quarantine.

This was followed by homicide cases which declined by 26 percent from 1,276 cases before the lockdown to 942 during quarantine periods.

Police also reported that rape cases fell by 21 percent from 7,274 prior to lockdown to 5,764 during community quarantine.

Murder cases fell by 19 percent from 4,796 prior to the lockdown to 3,889 during the nine-month quarantine. 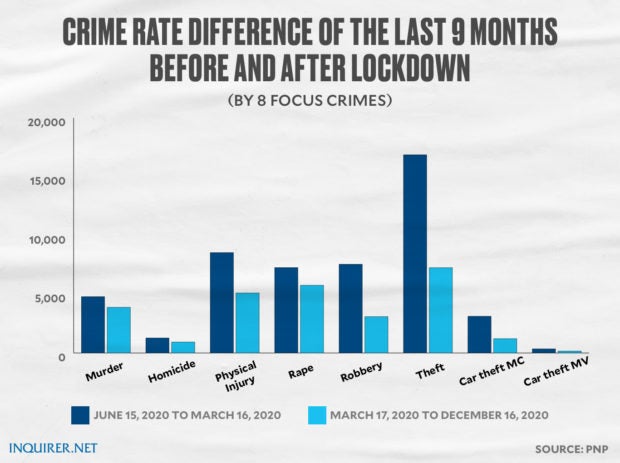 For Carlos Conde, Human Rights Watch (HRW) Asia Division senior researcher, the decrease in crime volume during the lockdown is “not disputable” but “logical” because of maximum police visibility. He noted that local government officials, who acted as force multipliers, had doubled security forces during the pandemic.

“I wouldn’t dispute their [PNP] figures [on crime], why do I think there is a decrease? It makes sense. It is logical that it will decrease. Since the pandemic, we have seen the unprecedented police presence in communities,” Conde said in a phone interview when sought for comment about the decrease in crimes. 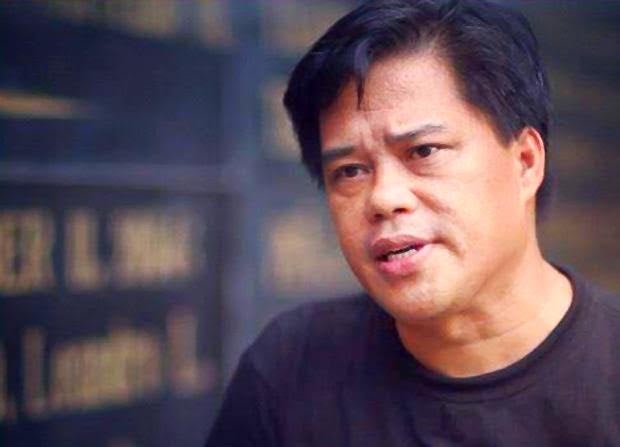 Despite the low crime volume, Conde said it is also “not surprising” that domestic violence, child abuses and other human rights violations would occur in a lockdown environment.

Conde said the COVID-19 pandemic “worsened the environment” that the government’s narcotics crackdown started in 2016 because of the public’s limited capacity and willingness to report its situation to authorities.

“It’s not just the pandemic lockdown we are worried about, it is also the drug war,” Conde said.

“You know the pandemic actually worsened the environment that was created by the drug war since 2016. In terms of people not willingly or not very open about reporting certain crimes or you know because they are afraid that they might get in trouble if they did that,” the researcher said.

Conde said the level of public fear of the drug war doubled in the pandemic because people become “sitting ducks” in a lockdown environment.

“If you can’t go outside of your community, you are a sitting duck. Especially if you are in the drugs watchlist being watched by the barangay [officials],” Conde said.

In a previous report, the human rights advocate said deaths due to the anti-drug campaign increased by 50 percent during the coronavirus lockdown.

After analyzing the Philippine Drug Enforcement Agency’s (PDEA) drug war data, Conde found that 155 people were killed in police anti-drug operations from April to July 2020, which is almost 50 percent higher than 103 killings documented during the pre-lockdown period of December 2019 to March 2020.

Even as PDEA was the source of the drug war records, PNP has since denied this figure, saying drug-related killings increased by just five percent.

Conde urged the country’s law enforcement to temporarily halt the drug war while Filipinos continue to bear the brunt of the pandemic.

“The police should have suspended the drug war operations,” said Conde.

“It should have conducted a more robust briefing or education operation with their members and barangay officials, that they should be cognizant and uphold the rights of the community,” the human rights expert said in mixed Filipino and English.

PNP chief Gen. Debold Sinas, who was then Metro Manila police chief, announced that Oplan Tokhang was suspended to give way for police to focus on manning quarantine checkpoints.

But Conde said: “there is no truth that police stopped its anti-drug operations,” reiterating that drug war killings increased during the pandemic.

Eleazar said an aspect of Oplan Tokhang was suspended as police could not visit suspects’ homes and encourage drug users  to surrender because movement has been restricted to prevent the spread of coronavirus.

“Lower barrel operations, which encourages drug users to surrender, are still continuing,” said Eleazar. “But since there is no movement, police could not go visit the houses. During the first months of lockdown, during modified enhanced community quarantine and enhanced community quarantine, we did not have drug operations. It was curtailed,”  he said. 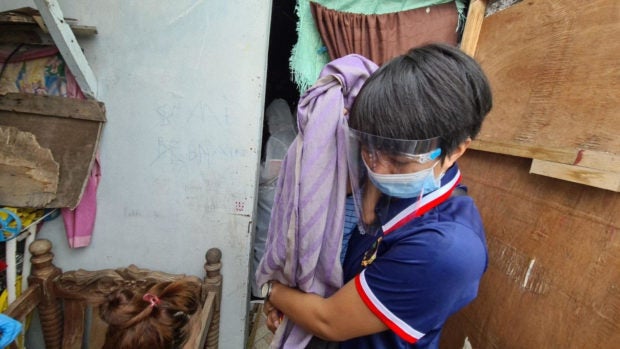 The implementation of community quarantine also “increased” children’s exposure to abuse because of limited help or assistance, the Council for the Welfare of Children (CWC) said.

“The duration of quarantine and further imposition of lockdowns increases the vulnerability of children to abuse, violence and exploitation,” said CWC in a report published last September.

It said victims “may not be able to seek immediate protection or help because of their limited access to people whom they trust or seek help from.”

CWC, however, warned that a decline in reported cases of abuse could occur because of limited access to internet and restrictions in transportation that would allow victims to report to authorities.

Data from the Philippine National Police – Crime Information Reporting and Analysis System and Women and Children Protection Center showed that a total of 2,678 cases of child rights violations from March 1 to May 15 and 1,384 from May 16 to June. These were cases of rape, acts of lasciviousness and child abuse and exploitation.

Another set of data from the Department of the Interior and Local Government showed that villages nationwide received a daily average report of 24 cases of physical, sexual, psychological, emotional abuse, neglect, and other types of violence from children.

ABS-CBN’s social welfare hotline Bantay Bata 163 received an average of three child abuse reports daily on top of other calls they got before the strict lockdown in mid-March.

Cases of violence vs women are underreported 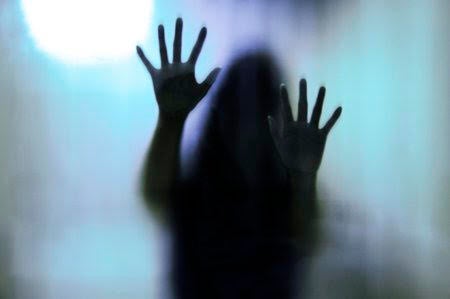 Just like abuse against minors, the Philippine Commission on Women (PCW) disclosed that cases of violence against women worsened during the lockdown.

Before the pandemic, PCW said one in three women experienced sexual abuse, mostly by an “intimate partner.” However, during the pandemic, cases of violence against women decreased possibly due to lack of access to communications during the lockdown.

“The decrease in reported cases may be attributed to the restricted movement in the communities, suspension of public transportation, victims being locked down with their perpetrators, lack of communication channels, and lack of information on where or how to report,” said PCW.

In April 2020, Human Rights Watch expressed alarm over the “abusive treatment” by some police officers and local officials who enforced strict curfew and quarantine rules against children during the pandemic.

In July this year, Fibel Pineda, 15, was about to file an act of lasciviousness complaint when two motorcycle-riding men shot her dead in Ilocos Sur.

Two policemen, believed to be behind the killing of Pineda, were already placed in restrictive custody and charged with murder.

In a previous report, the Commission on Human Rights (CHR) revealed that it was swamped with complaints of human rights abuses during the early months of the lockdown.

The nation’s rights body said filing complaints in court was challenging because of abnormal court operations and limited movement of CHR officers. 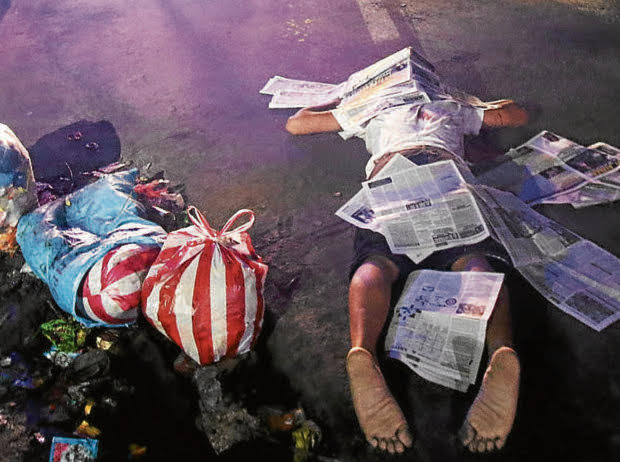 On top of this, Conde said police have been “remiss” in its duty to probe allegations of crimes and abuses perpetrated by its policemen and officers even before the lockdown period started.

As the drug war continued, Conde said there was almost “zero accountability” for police and government officials in the prosecution of cases against them. He said only a few cases of abuse by police was being investigated and only a few law enforcers are getting punished for human rights violations.

“When they started the drug war almost zero accountability and almost zero impunity, because there are only a few policemen convicted due to drug killings,” said Conde.

“There are a few others being investigated and even the police are not very forthright in the exact number. Even the Department of Justice doesn’t know exactly how the process is being investigated,” Conde said in mixed Filipino and English.

“There is a huge huge gap in the way the government, not just only the police but  also the law enforcement agencies, are trying to monitor, investigate and prosecute cases against police officers,” he added. 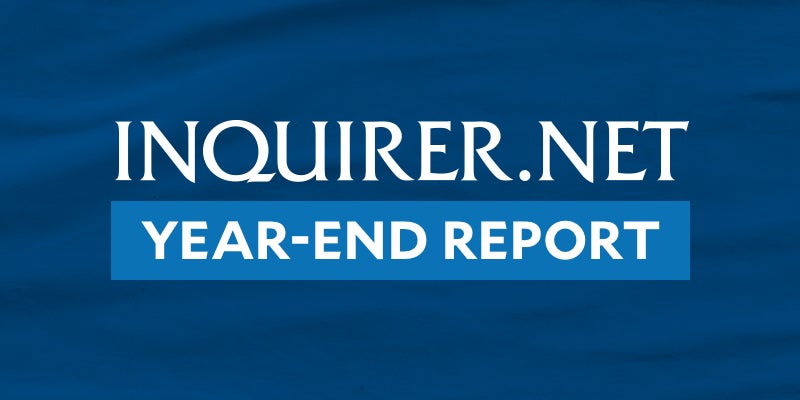