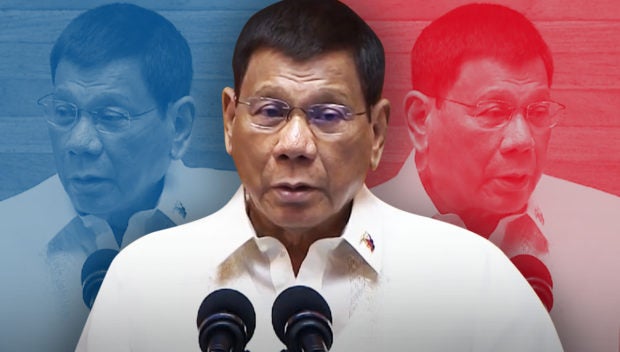 Those were some of the most jaw-dropping words of President Rodrigo Duterte when he delivered his 2019 State of the Nation Address (SONA), some three years after assuming office.

As Duterte delivers his last SONA, it would be interesting to look at bits of trivia about his speeches, his guests and his words in the last five years he was president.

2016: First SONA
• Duterte delivered his first SONA at the Batasang Pambansa in Quezon City, almost a month after taking office.
• The SONA coincided with the opening of the 17th Congress.
• Alongside Duterte at the podium were then-Senate President Koko Pimentel and then Speaker Pantaleon Alvarez
• The event was directed by award-winning movie director Brillante Mendoza.
• The entire SONA session lasted for one hour and 40 minutes.
• Duterte’s speech was one hour and 32 minutes long.
• The President’s priorities at that time included anti-terrorism, the passage of the Whistleblowers Act, the creation of a separate department for Overseas Filipino Workers (OFWs), the reinstatement of the death penalty, the passage of an act establishing a federal form of government, unilateral ceasefire, and many more.

2017
• The second SONA was again directed by Mendoza.
• The session lasted for two hours and six minutes.
• Duterte’s speech went on for two hours, his longest SONA speech.
• Without ad lib, Presidential Communications Operations Office (PCOO) Secretary Martin Andanar, said Duterte’s speech was supposedly 40 to 50 minutes long.
• Duterte, known for inserting curse words in his public speeches, inserted 25 expletives in his 2017 SONA.
• In his speech, Duterte lashed at detained Sen. Leila de Lima and human rights advocates who visited the senator at Camp Crame in Quezon City.
• After his speech, Duterte went out of the Batasan and climbed a makeshift stage built by leftist groups who were holding a demonstration.
• Duterte told the demonstrators to “shut up” after the group chanted “never again to martial law.”

2018
• In 2018, Joyce Bernal, a director known for romantic comedies, became director of Duterte’s third SONA
• The SONA, which usually starts at 4 PM, was delayed.
• Unlike in his two previous SONA, Duterte had few impromptus this year and was able to stick to his 16-page speech, according to then Special Assistant to the President Christopher “Bong” Go.
• His speech lasted only almost 48 minutes, which was his shortest SONA.
• The entire session was 53 minutes long.
• Like in 2016, his speech in 2018 did not contain any bad words.
• Alongside the president in the elevated podium this year were Senate President Vicente Sotto III and then Speaker Pantaleon Alvarez.
• This year’s SONA was known for the side events that took place before Duterte delivered his speech—specifically when Pampanga Rep. Gloria Arroyo attempted to take over as House leader and replace Alvarez.
• Duterte, yet again, slammed human rights advocates who criticized his administration’s war on drugs.
• “Your concern is human rights, mine is human lives” was one of the most memorable lines in Duterte’s SONA
• “You worry about the present; I am concerned [about] both the present and the future. I worry about the future because I know what crimes can do to the youth of this country. If not stopped, crimes can make human cesspools of succeeding generations. I will not allow it to happen. Not during my term,” he added.

2019
• Bernal, for the second time, directed Duterte’s SONA.
• Prior to the event, Andanar said the speech was expected to be between 40 minutes to an hour.
• Duterte’s speech on the day itself lasted for an hour and 34 minutes.
• The whole event was one hour and 40 minutes long.
• The budget for Duterte’s 2019 SONA was around P4.7 million, at least P200,000 less compared to the P4.9 million budget in 2018, according to then House Acting Secretary-General Dante Roberto Maling.
• The presidential helicopter carrying Duterte touched down almost an hour late around 4:53 PM at the Batasan Complex.
• The SONA this year only contained 10 expletives.
• This year, then House Speaker Alan Peter Cayetano joined Duterte and Sotto in the podium.
• In his speech, Duterte said he is already tired and that he already wanted to resign from his post.
• “Sabi ko wala ako.. I-I’m tired. I’’ tired and I am… Talagang gusto ko na rin mag resign. Sabi ko I am not happy anymore,” said Duterte.

2020
• Bernal returned to direct the “blended” and “non-traditional” 2020 SONA held amid the ongoing COVID-19 pandemic.
• Due to the pandemic, the 2020 SONA had the least Cabinet members and lawmakers who were physically present at the event.
• For the first time, members of the media were not allowed inside the premises of the House of Representatives to cover Duterte’s SONA.
• The entire event was an hour and 46 minutes long, while Duterte’s speech lasted for an hour and 40 minutes.
• In his 2020 SONA, Duterte only cursed five times.
• Addressing the Chinese incursions in West Philippine Sea, the President suggested that the government treat it with “diplomatic endeavors.”
• “China is claiming it. We are claiming it. China has the arms, we do not have it. So, it is simple as that. They are in possession of the property… So what can we do?” Duterte said.
• “We have to go to war and I cannot afford it. Maybe some other president can, but I cannot. Inutil ako diyan, sabihin ko sa inyo. And I’m willing to admit it. Talagang inutil ako diyan. Wala akong magawa,” he added.

READ: At a glance: The President’s 5th SONA