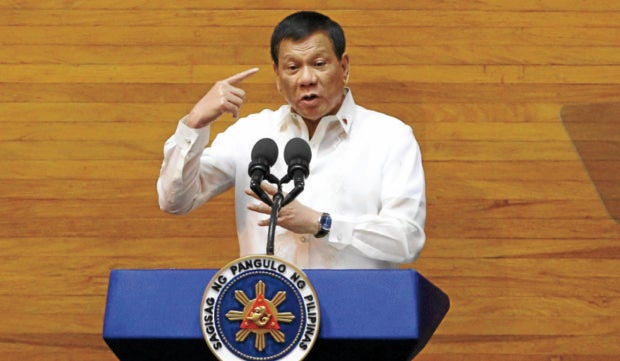 President Rodrigo Duterte on Monday warned that the nation faced uncertain times and said he would act like a bully in dealing with fools fighting his administration.

In a two-hour, expletive-laden State of the Nation Address (Sona), the President slammed critics of his law and order policies and vowed to carry on relentlessly his war on drugs, communist guerrillas and Islamic State-inspired terrorists.

“We live in troubled and uncertain times. And I fear that things might get worse before they become better,” he said in his nationally televised speech.

“But we will cope,” he promised, reading from a prepared, 14-page speech and digressing extemporaneously at times to lash out, using his favorite cuss words, at the United States, United Nations and human rights groups, mining companies, judiciary and media.

“I have resolved that no matter how long it takes, the fight against illegal drugs will continue,” the President said, urging Congress to pass immediately the bill that would restore the death penalty for heinous crimes involving drugs.

“Despite international and local pressures, the fight will not stop until those who deal in it understand that they have to stop because the alternatives are either jail or hell,” he added.

The President vowed to pursue peace up to the end of his term even as he lamented the turmoil in Marawi City, which Islamic State-allied terrorists seized, forcing him to declare martial law in Mindanao.

But he said he would not talk to communist insurgents making unreasonable demands in peace talks while at the same time attacking his security convoy and civilians.

He said leftist protesters were better off going home. The Communist Party of the Philippines founder, Jose Maria Sison, is an old man sick with colon cancer, he said. (Sison denied this in an online chat from The Netherlands.)

After his speech, the President went out, climbed the makeshift stage built by leftist groups holding a demonstration and was heckled by the crowd of 10,000.

“I know you have issues with me, but let’s talk about it,” Mr. Duterte said in his 10-minute appearance on stage. “But if you ambush me, I will turn my back on you. Bye bye.”

He told the crowd that martial law would not go on forever.

“I just have to finish something,” he said, referring to his trip last week to the besieged city of Marawi. “The reason why I cannot just enter there is that there are 300 hostages in the big mosque there.”

In his Sona, Mr. Duterte slammed a left-leaning group that took over government housing intended for soldiers.
He said he allowed them to keep the homes to avoid trouble, but he warned them against repeating their action.

“You do anarchy, I will order the soldiers and the police to shoot even if I have to bury thousands of Filipinos,” he said.

Mr. Duterte also reserved some of his harshest words for human rights advocates and defenders of due process.

He said these groups “trivialize” heinous crimes with human rights and due process.

“When you go into an anger and you burst with rage, that’s OK. But with so many killings as brutal as what happened, if you add human rights and due process, you stink and your mouth smells. If you want to criticize, condemn the act, stop there. But do not give the excuse or do not make it trivial by saying human rights,” he said.

“When you talk in public, carry the proper message,” he said, blasting his critics for failing to condemn crimes like massacres and rape of children.

He took a dig at those who he said gave importance to his detained critic Sen. Leila de Lima. De Lima has gained support from international rights groups.

“You were all here, you conducted the investigation. You heard the witnesses, you saw the video. Is she a credible woman? Can she be a moral person? You’re all drama,” he said.

The President said he succeeded in improving relations with China, easing tensions in the South China Sea.

He recalled the 1901 Balangiga incident to accentuate his displeasure with the United States.

In that incident, US troops were dispatched to Balangiga to avenge the deaths of 48 Americans at the hands of Filipino rebels and turn Samar into a “howling wilderness.”

Mr. Duterte called for the return of the church bells of Balangiga, which were seized by the Americans as spoils of war.

“They are not yours. They are ours. They belong to the Philippines. They are part of our national heritage,” he said.

Mr. Duterte also warned mining companies that he would tax them “to death” if they would not spend to restore the area they had damaged with their activities.

Otherwise, he would have to put a stop to mining, he said.

Mr. Duterte expressed frustration with the judiciary because of temporary restraining orders issued against government projects and cases involving government assets.
He said there should be a law that would prevent the courts from stopping certain government projects, especially when the bidding for these had been carried out properly.

Mr. Duterte did not spare the media.

He said the reason he cursed them was they were “not behaving.” —With a report from Jhesset O. Eñano and Jovic Yee