Magnitude 6.6 quake due to Manila trench movement, not linked to Taal’s activity — Phivolcs

MANILA, Philippines — The magnitude 6.6 earthquake that struck Batangas and other parts of Luzon on Saturday was due to the movement in the Manila trench and not in any way connected to Taal Volcano’s activity, the Philippine Institute of Volcanology and Seismology (Phivolcs) said.

(The earthquake earlier at 4:48 a.m. was caused by the movement in Manila trench where the movement of rocks affected the areas of Calatagan and Mindoro.)

(This has nothing to do with the volcanic activity of the Taal Volcano. This often happens and sometimes, the earthquakes underneath Calatagan are felt in Metro Manila.) 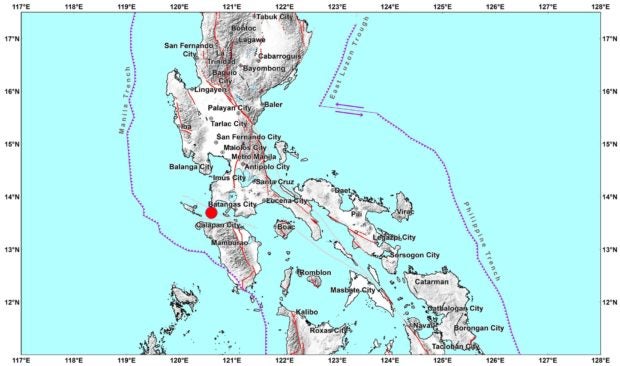 Taal Volcano’s status has been lowered to Alert Level 2 due to “decreased unrest” after it had a phreatomagmatic eruption on July 1.

Solidum said over 80 aftershocks have so far been recorded, the strongest of which happened at 4:57 a.m. with a magnitude of 5.5.

No damage nor casualty has so far been reported, he added.

(No casualty has so far been reported as the tremor was only felt at Intensity V. It’s strong, but not destructive. In Calatagan, there were landslides and some houses had minor damage but it was not extensive.)