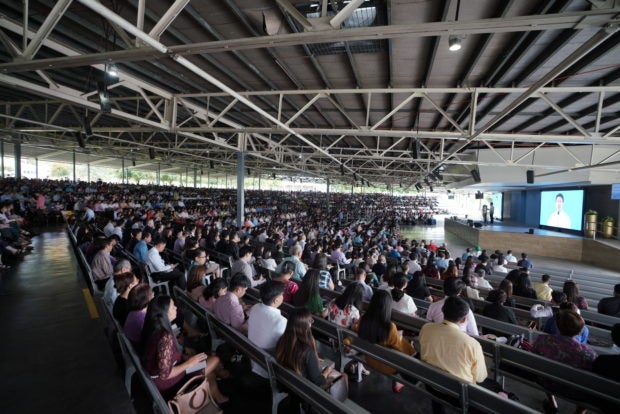 The scene of a JW convention in Quezon City before the pandemic. PHOTO FROM JW

The continued risk of bringing hundreds of people together because of COVID-19 moved Jehovah’s Witnesses (JWs) to worship online even if government officials have eased restriction on religious gatherings.

For two consecutive years now, JWs cancelled 160 in-person conventions in 90 venues in July and August this year, an annual event they held sacred for a century, according to Leynard Rodulfa, spokesman for Jehovah’s Witnesses in the Philippines.

He said since the health and safety of their flock is priority, JWs will instead stream online their conventions this year entitled “Powerful by Faith” to the homes of their more than 8.5 million members from 240 countries.

In the Philippines, there are more than 230,000 JW members who will watch the series of Bible-based lectures this weekend until the end of August, said Rodulfa, adding that members can choose the language they prefer.

He said this was a first for the JWs, who have held public conventions in arenas, convention centers and theaters around the world since 1897. Since March 2020, their place of worship called the Kingdom Hall has remained closed. They continue their ministry online or through the phone, Rodulfa said.

The last large gathering that JWs organized in the country was in November 2019 at the Mall of Asia arena where some 25,000 delegates from more than 60 countries listened to Bible-based lectures for three days.

“Our faith will continue to unite us in worship – even virtually – as millions gather in private homes around the world to enjoy a powerful and inspiring spiritual program,” Rodulfa said.

He urged the public, even non-JWs, to watch the program by going to JW.ORG on the web or JW Broadcasting on the free JW Library iOS or Android App, or on streaming platforms like Apple TV, and others.

The program is free and accessible to all, he said.