16.8% hunger rate calls for new round of cash aid for poor – Bayan 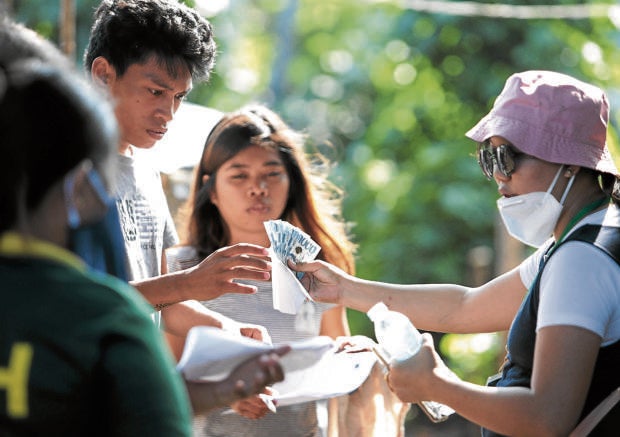 In this photo, taken in May 2020, health workers and volunteers seek beneficiaries of the government’s cash grants in Barangay Rawis in Legazpi City to deliver the subsidy meant to help poor families survive the prolonged lockdown. (File photo by MARK ALVIC ESPLANA / Philippine Daily Inquirer)

MANILA, Philippines — Poor families need a new round of cash aid from the government in the face of a high 16.8-percent hunger rate nationwide as noted by a recent Social Weather Stations (SWS) survey, the activist group Bagong Alyansang Makabayan (Bayan) said on Tuesday.

The SWS survey Reyes was referring to showed that 16.8 percent of households — or 4.8 million Filipino families — had experienced hunger at least once in the last three months.

Reyes also questioned the government’s hesitation in providing a new round of cash aid even though two laws —the Bayanihan to Heal As One Act and the Bayanihan to Recover As One Act — had allocated funds that remained unused by the time those laws had lapsed.

The Bayanihan laws allowed the government to transfer funds in the budget to programs addressing the COVID-19 pandemic. Those laws provide include allocations for cash aid under the Social Amelioration Program (SAP).

Reyes also called out President Rodrigo  Duterte for not labeling as urgent the next law — Bayanihan 3.

“There were unused Bayanihan funds in a time when people were going hungry. There was a chance to pass Bayanihan 3 in June, but Duterte did not certify it as urgent,” Reyes said.

“We are deep in debt, now more than P11 trillion, but funds are not being utilized for the needs of the people. Duterte’s pandemic response has been one disaster after another,” he added.

The government distributed cash aid twice last year — in May and June— in areas under an enhanced community quarantine (ECQ), a measure that affected the source of income of many workers.

Earlier this year, the government also handed out cash aid to those living in the so-called National Capital Region Plus (NCR Plus) — Metro Manila, Bulacan, Cavite, Laguna, and Rizal — when a COVID-19 surge forced another lockdown in that region.

That aid, however, was only at P1,000 per person,  with a maximum of P4,000 per household.  Several groups lamented that the amount would not be enough to support a family of four for a week, let alone for the two weeks that the ECQ lasted.

Aside from the involuntary hunger survey, SWS has also released other related surveys showing a lack of improvement over conditions noted last November 2020.

According to SWS, the number of Filipino families who characterized the food they consume as poor remained virtually the same.

The SWS survey on self-rated poverty also showed that only 17 percent of Filipino families felt that they were not poor, in contrast to 49 percent of households claiming that they felt poor.

The number of those who said they were food poor was slightly higher compared to the previous 48 percent recorded.

President keeps saying there’s no money, but some funds were unused – Robredo