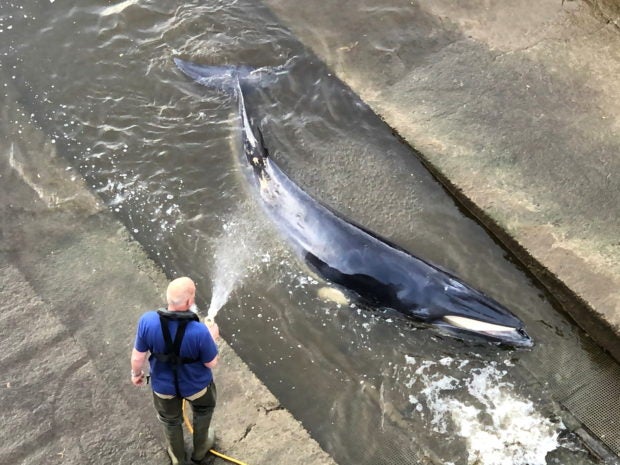 Rescue attempts are made as a small whale stranded in the River Thames is seen in this picture obtained from social media in London, Britain, May 9, 2021. DAVID KORSAKS @dkfitldn/via REUTERS

LONDON — A three-meter injured minke whale calf was spotted swimming upstream in the River Thames on Monday in west London, just hours after rescuers rushed to save the giant mammal’s life by refloating it.

A Reuters photographer spotted the whale several miles upstream from where it was refloated by a team of rescuers from the Port of London Authority, Royal National Lifeboat Institute (RNLI), British Divers Marine Life Rescue, London Fire Brigade, and the police.

As the whale headed in the wrong direction – away from the sea – there were growing fears about the fate of the injured calf as it battles for survival in London, hundreds of miles from its natural habitat in the wilds of the North Atlantic.

“He’s run out of river, to be honest – he has got nowhere to go unless he turns back and swims the right way,” said Martin Garside, a spokesman from Port of London Authority.

The stranded whale was first spotted on Sunday night at Richmond Lock. Rescuers worked for hours to refloat it and then towed it a mile downstream.

“That whale’s life hangs in the balance: it is injured, it is very young and it is so far from home,” said Garside.

“This animal comes from the northern North Sea – so it is hundreds of miles where it should be. The whale is a hundred miles from the opening to the North Sea in the Thames Estuary,” he said. “There is no obvious sign of his mother.” 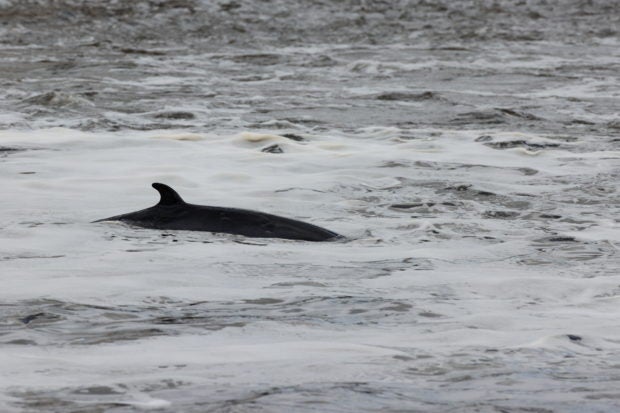 A three-metre minke whale calf that was found injured and beached on concrete is seen at Teddington Lock, in the River Thames, in London, Britain May 10, 2021 REUTERS/Hannah Mckay

The common minke whale is the smallest of all baleen whales, reaching 8-9 meters (26-30 feet) long. The whales prefer cooler temperatures and enjoy a varied diet of krill and schooling fish, according to the Whale and Dolphin Conservation group.

They do not usually appear in the River Thames and it was not immediately clear why the minke calf was so far from its normal feeding grounds.

“This whale could have become lost whilst following prey, or could be ill or injured,” Danny Groves of Whale and Dolphin Conservation told Reuters.

“Equally, many whales and dolphins get into difficulty because they may have been struck by a vessel at sea, injured in fishing nets, driven off course by loud underwater noise from seismic surveys for oil or gas, or loud underwater sonar from military exercises.

“This poor individual is way off course and still faces a struggle to get back out to sea,” Groves said.