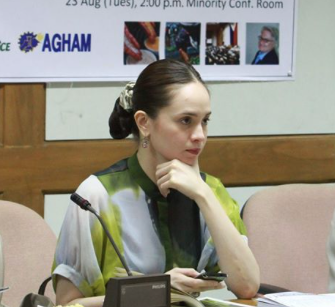 According to Torres, critics of the anti-communist task force must remember that the country is “in the same boat” during the COVID-19 pandemic — and that cutting off funding to NTF-ELCAC would cripple the government’s anti-insurgency  drive.

This was despite her acknowledging that red-tagging organizers of community pantry, an initiative to source donated food products for poor families, may lead to pantries being unable to feed hungry communities.

“At a time when our country is facing its biggest challenge in modern times, let us not forget that we are all in the same boat.  Identifying community pantry organizers stifles much needed efforts to feed hungry families affected by the COVID-19 pandemic,” Torres-Gomez said in a statement.

“However, defunding the NTF-ELCAC is not the appropriate action just to vent frustration over red-tagging. Let us focus on the wider perspective.  Incapacitating the NTF-ELCAC would be a concession of the government’s gains in the fight against insurgency,” she added.

Torres-Gomez, a staunch supporter of the Anti-Terrorism Act, stressed that the P16 billion budget of the NTF-ELCAC allocated for the Barangay Development Program is a “success” as it has helped rebels from rural areas reintegrate into society — which in turn stabilizes peace and order situation in many areas.

“In my opinion, it does not have to be one or the other. We can support community pantries, at the same time continue our successful programs towards peace via the NTF-ELCAC,” she explained.

“While I strongly agree that public officials should be held accountable for their actions and statements, let us take rational actions that will not jeopardize localized programs to end insurgency,” she added.

NTF-ELCAC drew controversy again after they linked some organizers of the community pantry to supposed legal fronts of the communist insurgency that is led by the Communist Party of the Philippines and the New People’s Army (CPP-NPA).

While NTF-ELCAC denied linking the whole initiative to the communist movement, both of the task force’s spokespersons — Presidential Communications Undersecretary Lorraine Badoy and Armed Forces’ Southern Luzon Command chief Lt. Gen. Antonio Parlade Jr. — have made comments asking people to be vigilant about some organizers.

Both were also asked by National Security Adviser Hermogenes Esperon Jr. to stop commenting on the issue, so that their actions would not be misconstrued as a move against the community pantries.

Due to these actions against the community pantry, several individuals from progressive and activist groups and even the government have asked that the NTF-ELCAC funds be diverted for social aid instead.  The list includes six senators — Senators Nancy Binay, Risa Hontiveros, Joel Villanueva, Franklin Drilon, Win Gatchalian, and Grace Poe.

However, Torres-Gomez said that such drastic actions should be avoided.

“This is a time that calls for calm and sound leadership. Let us steer away from drastic actions. Let us all work together to keep our boat afloat during this turbulent time,” she urged.