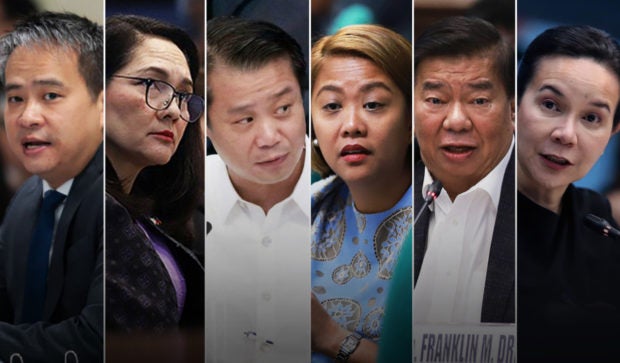 MANILA, Philippines — Six senators are seeing the need to withdraw funding for the National Task Force to End Local Communist Armed Conflict (NTF-Elcac) and reallocate its current P19-billion budget to fund assistance to people affected by the pandemic.

This, amid controversies hounding the task force over recent red-tagging of community pantry operations.

“Oh my! We should move to defund NTF-ELCAC in the next budget. Sayang lang pera ng taong bayan,” Senator Joel Villanueva said in a tweet late Wednesday.

(The Filipino people need this budget more than using it for these types of shenanigans!)

Villanueva was reacting to NTF-Elcac spokesperson Lt. Gen. Antonio Parlade Jr.’s remark in an interview over One News’ The Chiefs last Tuesday, where the military official likened the Maginhawa Community Pantry to Satan’s apple.

Senator Sherwin Gatchalian agreed with Villanueva’s suggestion to defund NTF-Elcac saying: “If these are the kind of people who will spend hard-earned taxpayer’s money, then it’s not worth it.”

“Agree. A hundred percent,” Hontiveros told reporters in an online interview when asked about calls to defund the government’s anti-insurgency task force.

(Last year, we opposed that allocation during budget debates.)

Senate Minority Leader Franklin Drilon, for his part, urged President Rodrigo Duterte to immediately realign the NTF-Elcac’s budget to fund the assistance for citizens affected by the pandemic.

“For the past weeks, I have been urging the President to realign the anti-insurgency budget to fund the most critical ‘ayuda’ to the poor. I am glad that my colleagues joined me in that call. But we do not have to wait for the 2022 budget debates to defund NTF-ELCAC. The President should realign the NTF-ELCAC under the 2021 [General Appropriations Act] now,” Drilon said.

When Congress was tackling the 2021 national budget last year, the minority bloc in the Senate repeatedly called for the realignment of NTF-Elcac’s budget to augment funds for the government’s pandemic response.

However, the budget of the task force remained intact due to the request of the executive department that it be retained since Duterte is “very adamant” to solve the underlying problems of insurgency in the country.

The Senate, however, will have no choice but to defund the NTF-Elcac if there is no clear action on the chamber’s recommendations and reminders, according to Senator Grace Poe.

(We already reminded NTF-Elcac before during the budget deliberations that they should not use their funds for red-tagging and making malicious accusations.)

She then pointed to Parlade, who, she said, should not make accusations without a solid basis.

“His sensitivities naturally lean towards the military and this presents an irreconcilable conflict,” the senator said, adding that the Senate had already recommended Parlade’s removal from his post as NTF-Elcac spokesperson.

(If there are no clear actions regarding our recommendations as well as on our reminders, we will have no choice but remove their budget.)

Senator Nancy Binay, meanwhile, vowed that NTF-Elcac’s budget for next year “will go through a fine-toothed comb” in the upper chamber.

“In just a few months, the Senate will start deliberating on the 2022 budget. Dahil sa mga ‘di magagandang experience ng red-tagging and baseless intel, we will definitely make sure that the NTF-ELCAC budget will go through a fine-toothed comb in the Senate,” Binay said in a statement.

(Since we are lacking in our pandemic response, I think it would be better for Parlade to join our contact tracers instead of resort to profiling.)

The NTF-Elcac, which has been linked to a number of controversies involving red-tagging, was criticized for sharing social media posts saying that community pantries are being used for propaganda of communist groups.

But Parlade said they were “just checking” the background of those behind the highly popular community pantries to make sure that organizers do not have any other agenda.