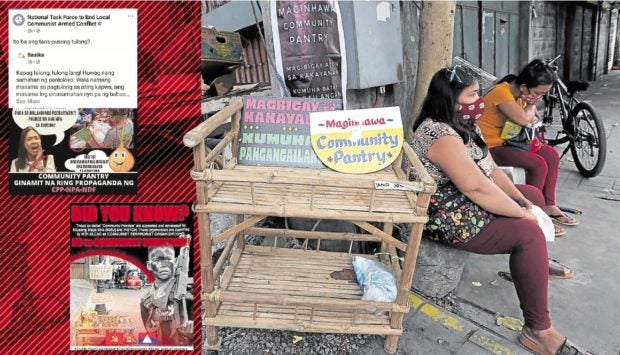 CAUTIOUS PAUSE Two women sit idly by at the spot of the original community pantry on Maginhawa Street in Quezon City after small business owner Ana Patricia Non, who ignited the food aid movement, announced a “pause” on Monday night as a safety precaution for volunteers following police profiling of people involved and anticommunist propaganda painting it as insurgent idea. –PHOTO BY MARIANNE BERMUDEZ, SCREENSHOT FROM NTF-ELCAC FACEBOOK PAGE

MANILA, Philippines — Malacañang on Tuesday said the government’s anticommunist task force should leave the community pantries alone after the agency linked the citizens’ movement to the insurgency, forcing the young woman who started it to temporarily shut down her aid station for the safety of volunteer workers.

President Rodrigo Duterte backs these citizens’ initiatives to provide food aid to the needy who are struggling to survive the pandemic which had crippled the economy, according to his spokesperson Harry Roque.

Interior Secretary Eduardo Año said he had not ordered the Philippine National Police to look into the community pantries around the country as they were expressions of the “bayanihan” spirit.

Ana Patricia Non, a 26-year-old small-business owner, announced on Monday night a “pause” in food distribution at the aid station that she personally put up, the now popular Maginhawa Community Pantry, named after the Quezon City street where it stands.

“It’s sad because we cannot for the meantime distribute the goods that we had prepared the whole day because of the Red-tagging that is happening,” she said on Facebook.

Various activist and human rights groups have said that Red-tagging had resulted in violent and fatal attacks on individuals and groups that had been labeled as communist fronts or supporters.

Non said that several police officers had asked for her telephone number and later wanted to know her organizational affiliations, leading her to suspect that they were profiling her.

She said the National Task Force to End Local Communist Armed Conflict (NTF-Elcac) posted an allegation from a group called Peace Philippines that “Tulong Kabataan,” which had set up its own pantry, was a communist-linked organization.

The NTF-Elcac also shared a post from another group called Basika, which claimed that communist insurgents were using the pantries for antigovernment propaganda and to recruit members.

“I think the President has spoken through my office, the [Department of Interior and Local Government] has spoken. And unless their concern is about health protocols not being observed, they should let these community pantries alone,” Roque said in a press briefing.

Pressed on whether the Palace would ask the NTF-Elcac to stop linking organizers of the people’s pantries to communist rebels, he said that was up to the task force.

“The DILG secretary has spoken, and I as presidential spokesperson have spoken, that there should be no barrier to bayanihan efforts of our countrymen,” he said.

Roque said that if NTF-Elcac members continued linking the community pantry organizers to communist insurgents, that would be considered part of their participation in the “free marketplace of ideas.”

But, he added: “I think whatever they (task force members) say, as long as the people benefit from it, people will still believe in community pantries,” he said.

Justice Secretary Menardo Guevarra on Tuesday said individuals setting up community pantries “have no legal duty” to provide their personal information to authorities.

“A person voluntarily doing an act of kindness and compassion toward his neighbor should be left alone,” Guevarra said.

“It is not proper for law enforcement agents to interrogate [them] unless there is reason to believe that [they are] violating any law,” he said.

Non said she was alarmed that even the official Facebook page of the Quezon City Police District shared a post alleging that community pantries were supported by communist organizations.

Other individuals who have set up pantries in other cities reported that they also were asked by police to fill out a form that asked for their personal information and family background.

“My goal is to reach out and help … [but] when people are discredited, when they are Red-tagged, the whole community is discredited,” said Non.

She said that they would resume food distribution on Wednesday once they are assured of their volunteers’ safety.

“My advice for people who are unsure about the intention of the community pantry, or who are afraid of underlying motives, the best solution—I’m not going to explain myself and I do not need to explain our intention—I would ask you to drop by at the community pantry so you will hear the stories, to see the line, to talk to people. Because this is how we will learn—from the people,” she said.

She said the community pantry initiative had no political affiliation and that individuals from various social classes, communities and even religious backgrounds had either volunteered, donated goods or started a pantry in their own localities.

Community pantries have sprouted all around the country and go by the original Maginhawa slogan of “Magbigay ayon sa kakayahan, kumuha batay sa pangangailangan” (Give whatever you can, take only what you need).

“We’re not asking the government or the people that we share political beliefs or ideas. What we’re asking for is unity. Let’s not kill this initiative because [the effort] has helped many people put food on their tables,” Non said.

Quezon City Mayor Joy Belmonte said she would ensure that the operation of community pantries in her city and their volunteers would “remain safe and unimpeded.”

The People’s Law Enforcement Board of Quezon City, which checks erring policemen, said it would look into the alleged red-baiting.

The Quezon City police apologized for its Facebook post, adding that it “does not and will never allow alleged red-tagging.”

City police chief Brig. Gen. Antonio Yarra said the police “do not discredit any groups [and] instead we encourage the bayanihan spirit.”

PNP chief Debold Sinas said he had not ordered “any form of profiling of organizers of community pantries.”

Año on Tuesday said no permits were required to set up community pantries, correcting Undersecretary Martin Diño’s earlier statement that these were necessary.

“As long as the intention is good and without political color, it should be encouraged and supported. Since this is a purely voluntary and private initiative, we should not interfere except to ensure that minimum health standards are complied with,” Año said.

The Anti-Red Tape Authority (Arta) also said community pantries do not need any permit from the government because they were not considered businesses.

“If all [acts of kindness] needed permit, we would have a more difficult time during this pandemic,” Arta Director General Jeremiah Belgica told reporters.

—WITH REPORTS FROM JEANNETTE I. ANDRADE, MARLON RAMOS AND ROY STEPHEN C. CANIVEL

Read Next
‘This is a different CPP’: Bishop, CHR decry threat to pantry proponents
EDITORS' PICK
PDP-Laban exec insists Pacquiao didn’t criticize Duterte on West PH Sea issue
Tired of your Wi-Fi signal problems at home? Here’s a solution!
No trees will be harmed in building of Nayong Pilipino vaccination hub – DOT
Get a chance to win 5G smartphones with Smart Signature Plans
Time to hurry up immunization before vaccines expire – Bayan Muna
Marian Rivera partners with JC to boost public health awareness
MOST READ
Sharon Cuneta flies to LA to take some time off: ‘I need to breathe, collect myself’
Esperon: ‘The master red-tagger is no other than Jose Maria Sison’
Tiny Sandy Cay reveals the big lie
More Chinese maritime militia ships return to West Philippine Sea
Don't miss out on the latest news and information.