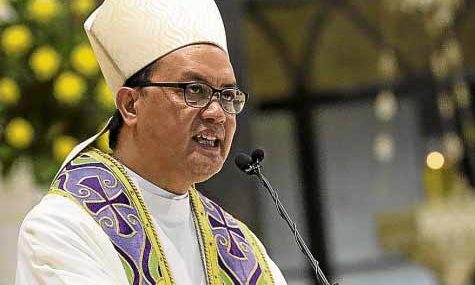 MANILA, Philippines — Various groups, along with a Catholic bishop and the Commission on Human Rights (CHR), rallied behind the community pantries that had sprouted across the country as inspired by a woman’s neighborhood initiative in Quezon City last week, after she announced on Tuesday that she was putting her project on hold after being “red-tagged’’ by the police.

“This is a different CPP. This is not the Communist Party of the Philippines but the Community Pantry of the Poor,” Caloocan Bishop Pablo Virgilio David said, reacting to news that Ana Patricia Non, the 26-year-old behind the Maginhawa Community Pantry, had expressed alarm over a post on the official Facebook account of the Quezon City Police District (QCPD) alleging that the pantries were being supported by groups linked to the communist insurgency.

“That is not a crime but an effort to help one another in a time of need,” said David, who stressed that government officials should actually be “happy” that Non’s idea had served as a model for like-minded private citizens.

On Sunday, the bishop, an outspoken critic of the Duterte administration, particularly the President’s bloody war on drugs, partnered with a Caloocan youth group to set up a community pantry at San Roque Cathedral.

That pantry “will remain open as long as there are people willing to give what they can to those in need,” David said on Tuesday.

The CHR also decried the way the authorities responded to Non’s project and others it had inspired.

“It is concerning that this initiative, as well as the other community pantries that have followed, are under the threat of profiling and surveillance by local law enforcement authorities,” CHR spokesperson Jacqueline De Guia said in a statement.

She reminded the police that the collection of data on private citizens without their consent was an “encroachment of [their] right to privacy… and represents yet again an overreach of police power bereft of any statutory or legal basis.”

“The shameful and politicking actions of the few ideologically bent has dimmed the hopes of many that have come to see the community pantries as a means of sustenance to provide food for themselves and their families,” she stressed.

The National Union of Peoples’ Lawyers (NUPL) maintained that people providing free food and other basic necessities during the pandemic were not violating any law or ordinance.

The pantries were established in different areas nationwide not to raise profit or income for the organizers, but to inspire others to help those “who can barely survive because of lack of governmental support,” the group said.

“More than that, such undertaking is a constitutional right of the people and the government is out of line if it discourages, obstructs and even stigmatizes those who should freely exercise it,” NUPL president Edre Olalia said in a statement.

“Back off. Leave the people in peace,” he said.

Another lawyers group advised community pantry organizers that they were not compelled to disclose any information to the police should they be approached and asked for details about the food donors or their fellow volunteers.

That is tantamount to profiling, said Public Interest Law Center lawyer Kristina Conti, who maintained that such collective activities were well within people’s rights and legitimate advocacies.

“The police are overstepping their duties here, and even if the say they are compiling information for future investigation, all this is only based on a ‘probability suspicion’ that something wrong is being committed,” she said.

The militant fisherfolk group Pamalakaya, which helped organize and supply fish and produce for some of the community pantries set up in Metro Manila, said this latest example of Red-tagging only showed that the government “was afraid of the people’s initiatives and collective action.”

“Unacceptable and detestable. Community pantries are community initiatives in the face of widespread hunger that the government has terribly failed to address,” said Pamalakaya national chair Fernando Hicap.

“Yet the government has the audacity to spoil the very endeavor of the Filipinos to look out for each other in difficult times.”

Karapatan secretary general Cristina Palabay, meanwhile, stressed that organizing pantries and other mutual aid initiatives “was not a crime” but was nonetheless “a damning indictment of the Duterte government’s criminal negligence of people’s rights and welfare—of its glaring failure to uphold the State’s duty such as providing aid to households and communities hard-hit by the crisis.”

The international monitor Human Rights Watch (HRW), meanwhile, reminded the government of the “violent results” of Red-tagging and urged its officials to lay off the community pantries.

“By vilifying now even ordinary Filipinos who only want to help, the government is weaponizing ‘Red-tagging’ to instill fear among the general public that is increasingly agitated by the impact of the Covid-19 pandemic,” HRW senior researcher Carlos Conde said.