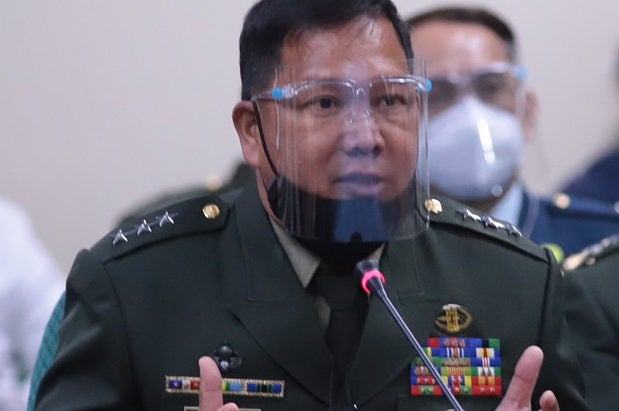 MANILA, Philippines — A group of journalists covering the courts and the justice department on Thursday condemned Army Lt. Gen. Antonio Parlade Jr. for threatening to inflict the Anti-Terrorism Act against one of its members who reported on a petition against the law in the Supreme Court filed by two alleged communist rebels.

Parlade’s object of ire was Tetch Torres-Tupas who wrote on Inquirer.net on Feb. 2 that two Aeta men, Japer Gurung and Junior Ramos—the first to be accused of violating the antiterror law—joined other petitioners, saying they were victims of illegal arrest and torture by Army soldiers from the 73rd Division Reconnaissance Company (DRC) in August last year in Zambales province.

While he was in military detention, Gurung said he was beaten up, placed inside a sack and hung upside down, suffocated with a plastic bag and cigarette smoke, and forced to eat his own feces to make him admit that he was a member of the New People’s Army.

In a post on his Facebook page on Wednesday, Parlade, the Southern Luzon Command chief and spokesperson for the National Task Force to End Local Communist Armed Conflict (NTF-Elcac), branded Tupas’ story as “fake” and “propaganda.”

He suggested that Tupas’ story was obtained from the US-based Human Rights Watch and media group Kodao, which he both tagged as “propaganda machines” of the Communist Party of the Philippines (CPP).

“Congratulations for a sloppy work Tetch Torres-Tupaz (sic) of Inquirer.net. You did not even bother to check the side of the AFP (Armed Forces of the Philippines) and gov’t if what you are reporting is true or FAKE. Propagandista. No such thing happened. That unit is not even there but in Davao,” Parlade said in his post.

The two men’s allegations, however, were taken directly from their narration of their experience in the petition they filed on the day the Supreme Court opened oral arguments against the antiterror law. They said they were arrested while evacuating with their families from Barangay Buhawen in San Marcelino, Zambales, to avoid being caught in the crossfire during a firefight between rebels and soldiers on Aug. 21, 2020.

Also, the 73rd DRC of the 7th Infantry Division (7th ID) that Parlade referred to was confirmed to be the unit involved in a clash with the guerrillas that killed one Army sergeant as disclosed in a Facebook post by the 7th ID on Aug. 22, 2020.

Responding to a question from a netizen on his post whether charges could be filed against Tupas, he replied: “Aiding the terrorists by spreading lies? Puede (Possible).”

That remark drew a sharp rebuke from Tupas’ fellow members in the justice beat and from Inquirer.net.

“We, the Justice and Court Reporters Association (Jucra), strongly condemn the threat of Lt. Gen. Antonio Parlade Jr. to sue one of our members, Inquirer.net’s Tetch Torres-Tupas, for allegedly providing support to terrorists. This is utterly unacceptable,” the group said in a statement.

“As Parlade surely knows, providing material support to terrorists is a crime under Section 12 of the Anti-Terror Law, people accused of which are liable as ‘principals’ and punishable by at least 12 years up to life imprisonment,” it said.

The National Union of Journalists of the Philippines (NUJP) said it “takes exception to and expresses alarm over yet another threat from Parlade, whose previous Facebook post about groups questioning the Anti-Terrorism Act of 2020 is viewed as a clear threat by some of the petitioners, including former Supreme Court Senior Associate Justice Antonio Carpio and former Ombudsman Conchita Carpio Morales.”

The government had repeatedly said that the antiterror law would not be used to stifle dissent or clamp down on the press, the NUJP said, but Parlade’s statements “speak louder” than those reassurances.

“Government inaction on the threat against Torres-Tupas, and on similar statements and threats against activists and journalists, means government consent and even endorsement of those actions and belies the claim that the law does not target criticism and dissent,” the group said.

Inquirer.net also condemned Parlade’s baseless allegations in a brief statement. Inquirer.net is a sister company of the Philippine Daily Inquirer.

“Inquirer.net takes vigorous exception to the apparent Red-tagging of our reporter and expresses alarm over Parlade’s attempt to sow fear, stifle dissent and curtail her right to make truthful and objective reports,” it said, adding that it fully supported Tupas and upheld her integrity.

But the military official was unrelenting and pressed his attacks on Thursday.

Asked to comment on the Jucra’s demand for a public apology for his baseless allegations against Tupas, Parlade told the Inquirer: “Lahat ba kayo nagsulat ng Aeta complaint na fake? Lahat kayo mag explain dapat. (Did you all write about that Aetas’ fake complaint? You all should be explaining yourselves.)”

“Is the media trying to influence the magistrate (sic) hearing the petitions by peddling news which they already know to be fake?” he asked.

“The AFP has been denying that report already, ever since, because it never happened. It’s being reported abroad and is besmirching the image of the country not only the AFP,” he said.“Inquirer did not even bother to check AGAIN with AFP to get their side. Now you want me to apologize after calling your attention on this unfair report? Shame on you Tetch Tupas. Shame on all of you who continue to peddle lies,” he said.

The Inquirer did get a comment from military spokesperson Maj. Gen. Edgard Arevalo.

“Our field commander reported that said claim has been leveled against our troops since last year. And according to him, the claimants have failed to prove their accusations,” Arevalo said. “The act that our soldiers are accused of is a serious allegation that is neither a policy nor a practice.”

In its statement, Jucra said that if Parlade only had researched and listened to the oral arguments in the Supreme Court against the antiterror law, social media posts like his “are what petitioners claim as evidence of a credible threat of prosecution—threat that can warrant a judicial review of the law he seeks to protect and promote.”

A lawyer for one group opposing that law, former Solicitor General Jose Anselmo Cadiz, cited threats Parlade made against the petitioners.

In an earlier Facebook post, Parlade warned that the “Day of Judgment is upon you and the Filipino people, who have suffered enough from the malignant hands of the (CPP), of which you are a part of (sic), sit in judgment.”

“Very soon, blood debts will be settled. The long arm of the law will catch up on you and your supporters,” he said.

“With oversized blinders, he bullies and picks with impunity mostly those not of his own size,” Olalia said in a statement. “In a grotesque way, he is actually reinforcing and validating the myriad of objections and criticisms against the ATA (Anti-Terrorism Act).”