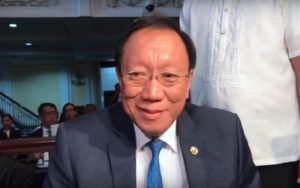 MANILA, Philippines – The Anti-Terrorism Act of 2020 being a tool to silence dissent is a “monstrous lie,” Solicitor General Jose Calida said Tuesday.

“Like any other law that has implications on individual rights, the Anti-Terrorism Act has been unfairly stigmatized as a mere legal ruse to quell oppositions against the current administration. This is a monstrous lie,” Calida said.

“The Anti-Terrorism Act is not an instrument of oppression. Neither is it a tool to suppress the vibrance of our democracy,” said Calida adding that the law is the country’s commitment to protecting life, liberty, and property from terrorism.

Borrowing the words of President Rodrigo Duterte, Calida said there is no reason to fear the law if you are not a terrorist.

The Anti-Terrorism Act is a hotly contested law that has reached the Supreme Court with 37 petitions filed. Previously, petitions filed against the Human Security Act, the Cybercrime Prevention Act, and RH Law have not reached 30 petitions.

The petitioners want the Supreme Court to stop the law’s implementation while it’s being debated.

They said the law has led to a crackdown on activists and unionists and even those who speak against the government.

But Calida said the NTF-ELCAC has no policy against dissenters and Parlade made his statement in a personal capacity.

Meanwhile, red-tagged National Union of Peoples’ Lawyer (NUPL) Atty. Angelo Karlo Guillen was stabbed to the head last March. He survived the attack. The police said the motive could be robbery but Guillen, in a statement last Monday said the attackers took only his laptop and case files. His wallet and mobile phone were not taken.