MANILA, Philippines — The owners of a cargo vessel that sank off Jasaan town in Misamis Oriental town will take full responsibility for the oil spill that the ship caused, the Department of Environment and Natural Resources (DENR) said on Tuesday.

According to DENR Secretary Roy Cimatu, the Environmental Management Bureau (EMB) in Northern Mindanao has already held a meeting with the shipowners of M/V Racal IV.

“[DENR] has assured that the owners of the MV Racal IV that sank off the town of Jasaan will take full responsibility for the oil spill incident in Misamis Oriental last April 3,” the department said in a statement.

“The incident should serve as a lesson for business owners to take full responsibility for the damages brought about by their operations near the country’s rich ecosystems,” Cimatu added. 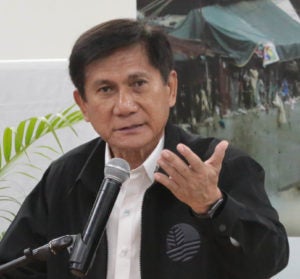 Cimatu explained that during the meeting between EMB-Region 10 Director Reynaldo Digamo with government agencies concerned and vessel owners Sherwin Doctora and Lord Sanny Salvaña last April 13, the latter agreed to compensate for all the expenses — from the water cleanup to the transportation of contaminated debris.

Also, Digamo added that the owners should also be held liable for the opportunities that fishermen and other stakeholders lost.

“It was agreed upon in the meeting that the owners should compensate all the expenses, including the cleanup activities, as well as the transportation of the contaminated debris to the accredited treatment, storage, and disposal facility,” Digamo said in his report.

“We commend the people behind this successful dialogue with our stakeholders to ensure that the oil spill will be controlled and thoroughly cleaned to protect our vast oceans and seas,” Cimatu added.

Reports last April 5 showed that residents of Lower Jasaan — which appears to be one of the areas most affected by the oil spill — have expressed concern over the harmful effects of the oil on marine biodiversity.

M/V Racal IV  was docked for five years in a local shipyard before a breach in the hull caused water to seep into the vessel.  Oil and other harmful fluids were supposed to be pumped out from the vessel before it would be salvaged, but it sank first before the salvaging company could do it.

The EMB office claimed that test results showed that the concentrations of ammonia, color, dissolved oxygen, nitrates, oil and grease, pH, phosphates, and total suspended solids and temperature are all within the Water Quality Guidelines for Class SC Water pursuant to DENR Administrative Order 2016-08.

“Class SC water body includes Fishery Water Class III, which is intended for the propagation and growth of fish and other aquatic resources, and intended for commercial and sustenance fishing,” DENR said.

“As of its April 6 report, the PCG said it has recovered approximately 80 percent of the oil spill including oil-contaminated debris and materials along the shorelines of the affected areas, declaring that the situation is ‘already under control,’” it assured the public.

This is not the first time that an oil spill occurred in Jasaan town. Last November 2020, barangay officials from Lower Jasaan noticed a black substance floating on along the coast, which eventually turned to be bilge oil, accumulating from a ship’s engine room.

PCG said back then that 200 liters of the oil have been recovered.