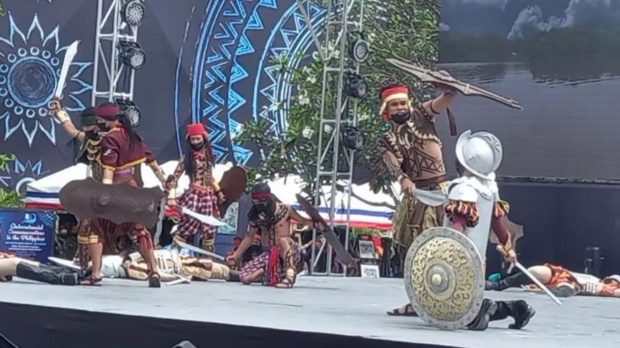 Speaking at the 500th anniversary of the clash between a group of natives, led by chieftain Lapulapu, and Spanish colonizers, led by Portuguese explorer Ferdinand Magellan, Go said Lapulapu may actually be someone from Mindanao.

“It is important to look back at our past,” said Go in Filipino.

“But it is also important to correct the mistakes of the past so we can understand the present and face the future with confidence,” he added.

Go cited a theory of Abraham Idjirani, a Sultanate of Sulu official, who believed that Lapulapu was ordered to travel from Mindanao to check on foreigners arriving in what would later be known as Mactan.

“I and President Duterte are from Mindanao,” said Go.

“But based on a version of history, the former East Kingdom of Sulu, who guards the 7,107 islands of the Philippines, requested Lapulapu to be vigilant after foreigners were seen near Mactan,” he said.

Go echoed what Duterte said in August 2018, a little more than a year after being elected President.

“Lapulapu was the first Filipino to kill a foreigner who invaded our country,” multiple reports online quoted Duterte as saying then.

“But sadly, he was a Visayan. I think he was a Moro, still in the Visayas,” Duterte said.

“History forgot him,” the President said at the time. “He was the first hero and designated a certain specie of fish and called it Lapulapu. That is why it pains me deeply to see Lapulapu being eaten every day—escabeche, fried and all sorts of recipe,” Duterte had said.

Go’s accounts, however, were criticized by some Cebuano historians. 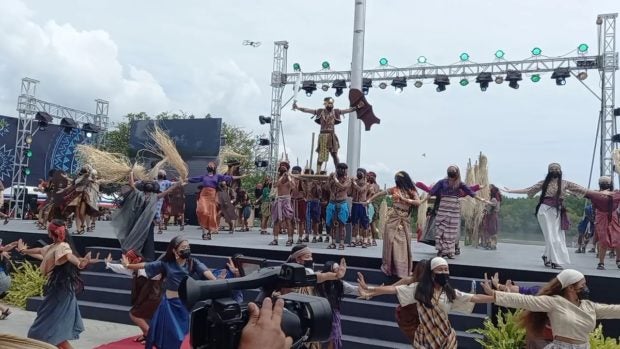 Arnis coach Jonel Pepito plays Lapulapu in a reenactment of the deadly blow to Magellan that killed the Portuguese explorer during the Battle of Mactan. PHOTO BY DALE ISRAEL

Cebuano archaeologist Jose Eleazar Bersales, who studies human history through the excavation of sites and the analysis of artifacts and other physical remains, said Go may have taken his account from Dr. Danilo Gerona’s book, entitled “Ferdinand Magellan, The Armada de Maluco and the European Discovery of the Philippines.”

”Most of what is known about Lapulapu in recent times was embedded in folk myths and legends, heavily loaded with nationalist discourses,” Bersales said.

“I warned that as the 500th anniversary of the historic Battle of Mactan approached, there will be idiotic claims about him, about his being Muslim and Bornean at that,” he added.

At his speech, Go said the historic clash took place only because Magellan and Lapulapu met on Mactan Island.

“From Sulu, Lapulapu brought with him several Tausug warriors on board some boats,” Go said. “They were met by Magellan’s soldiers, which led to the Battle of Mactan where the Portuguese explorer was killed,” he said.

“Lapulapu became a hero for defending our country,” said Go.

“Part of the victory were those people from Mindanao who fought the invaders. That is why President Duterte wholeheartedly looks up to Lapulapu,” he said.

Bersales, however, pointed out that lack of historical details about Lapulapu had led to a number of myths about him.

He said the only existing primary source mentioning Lapulapu by name was the account of Antonio Pigafetta, the chronicler of the Spanish expedition led by Magellan in 1521.

“Where did he come from? What was his genealogy? Nobody actually knows,” Bersales said of Lapulapu’s origin.

“Pigafetta, who kept a log of the Magellan expedition, was not interested in genealogies of native chiefs,” he said.

“Given this vacuum, therefore, came attempts at filling it up by inventing history, cloaking it as folklore handed down from one’s grandparents or, in the case of the story of the ten Bornean datus, from an old trunk full of papers,” he added.

The Battle of Mactan was reenacted on Tuesday (April 27) at the same site where Lapulapu and his warriors emerged victorious.

Before the reenactment, simultaneous flag raising ceremonies were held in different government buildings in the country. 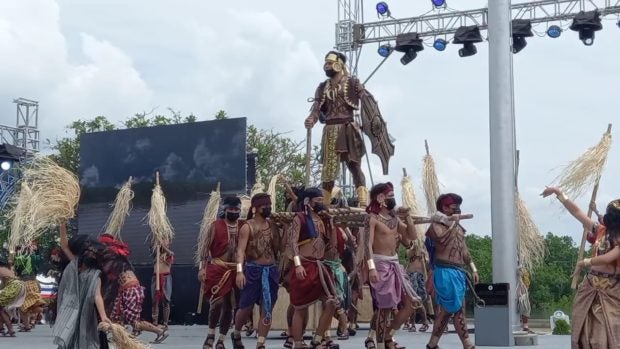 The reenactment, described as a “dance dramatization,” featured not just actors and singers but also Kata and Arnis athletes who played roles as Lapulapu’s warriors.

Lapulapu was portrayed by local Arnis coach Jonel Pepito, a native of Lapulapu City. Along with Pepito were 100 performers in the 20-minute presentation. Duterte was absent but recorded a speech.

In the speech, Duterte said the country honors “the worthy heirs of Lapulapu—our medical and essential frontliners who face the danger of COVID-19.”

“They risk their lives to ensure the safety of their fellow Filipinos,” Duterte said.

“Let us draw inspiration from heroes of the past,” the President said.

WITH REPORTS BY ADOR VINCENT MAYOL