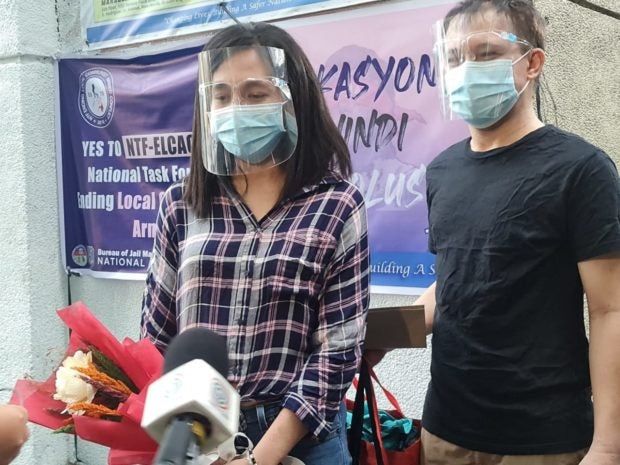 Journalist Lady Ann Salem and trade unionist Rodrigo Esparago walk out of the Mandaluyong detention facility exactly a month after the illegal possession of firearms and explosives case against them was dismissed by the Mandaluyong RTC. Photo by Tetch Torres-Tupas

MANILA, Philippines—The Mandaluyong Regional Trial Court has ordered the release of journalist Lady Ann Salem and trade unionist Rodrigo Esparago, a month after the illegal firearms and explosives case against them was dismissed.

The court said, “there are not enough facts and circumstances which would lead a reasonably direct and prudent man to believe that an offense has been committed and that the objects sought in connection with the offense are in the place sought to be searched.”

Salem and Esparago remained in detention after the prosecutors opposed their release, pointing out that the decision granting her motion to quash is not yet final.

But the counsel for the two, the Public Interest Law Center (PILC), in their comment, maintained that the case against the two should be dismissed due to the false testimonies of the police officers and inconsistencies in the affidavit of the informant.

The informant, in his affidavit, said he met Salem and Esparago in May 2020 in a condominium unit where firearms, ammunition, and hand grenades have been delivered up to October 2020. However, Salem moved in at the condominium unit as Editor-in-Chief of Manila Today only on October 23, 2020.

In allowing the release of Salem and Esparago, the court explained that it has decided to hold the issuance of a release order “in view of an honest belief that the assailed Order [dismissal of the case via a motion to quash], although not appealable can be the subject of a certiorari proceeding.”

“But after thorough consideration of the arguments raised and jurisprudence cited in Salem’s Comment, the court resolves to reconsider and rule that a trial court is empowered to immediately release the accused if the evidence on record clearly fails to establish probable cause,” the court said.

Salem told reporters that she never expected that she would be released on Friday.

“I thank the Judge because she immediately saw the truth that this is nothing but a made-up case against us. The court’s action on this case is faster compared to the case of other political prisoners,” Salem told reporters, adding that she hoped that the other judges handling cases of political prisoners would also do the same.

Salem, editor of alternative media site Manila Today, and her companion Rodrigo Esparago were arrested on December 10 last year for supposed violation of Republic Act No. 10592 or the Comprehensive Firearms and Ammunition Regulation Act and R.A. 9516 or the Law on Explosives, after police accused them of being involved in a gun-running syndicate.

Her organization operates one of the sites previously red-tagged by the National Task Force to End Local Communist Armed Conflict (NTF-Elcac) for allegedly supporting the communist movement. Their arrests coincided with the observance of global Human Rights Day.