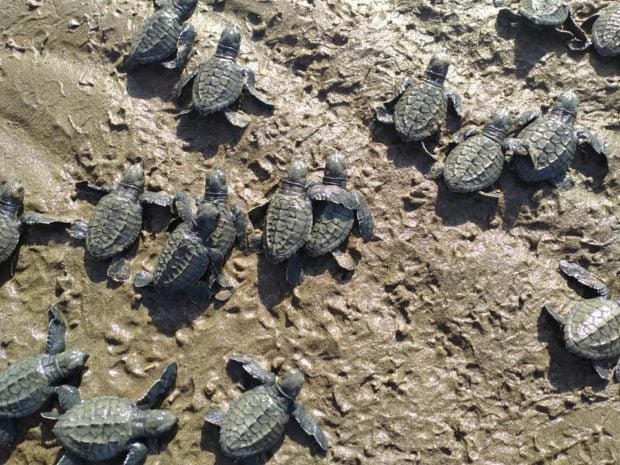 Some of the 67 olive ridley sea turtle hatchlings freed in the waters of Tayabas Bay from shores of Sariaya town in Quezon province early in the morning of March 3, 2021 by local officials and fisherfolk. Photo from Sherwin Rosales

LUCENA CITY –– At least 1,723 baby sea turtles, locally known as “pawikan,” had been freed to their natural habitat in Tayabas Bay off Sariaya town in Quezon province since the start of this year.

On March 3, another 67 newly hatched olive ridley sea turtles were released in the coastal village of Bignay 1 of the town, according to Sherwin Rosales, a fisheries technician at the municipal government’s agriculture office.

Rosales said it was the last batch of baby turtles that were returned to the bay this hatching season.

Similar events took place in other coastal villages, but some have not been documented by the municipal agriculture office, he said.

During the first three months of the year, just before sunrise, the sight of baby sea turtles on the shores racing towards the bay has become an annual spectacle for nature lovers and protectors.

The releases were usually witnessed by families of fishermen and by local government and barangay officials.

The Sariaya coastline, host to many beach resorts, serves as a sanctuary to turtles that usually come to lay and hatch their eggs from October to December and stay for 58 days throughout the nesting period.

The hatchlings were cared for by fishermen, fish wardens, and the local government in four nesting sites in the villages of Castañas, San Roque, Guisguis, and Bignay 2.

Rosales appealed to fishers and coastal villagers to immediately report the presence of marine turtles to authorities.

“Don’t kill or harm them. We have to protect and take care of them (so they can) multiply,” he said. 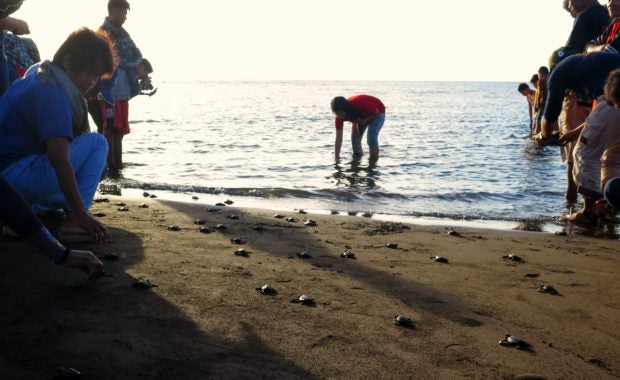 The coastal villages of Sariaya are known nesting sites of the green sea, olive ridley, and hawksbill turtle species, which the International Union for Conservation of Nature and Natural Resources and the Convention on International Trade in Endangered Species of Wild Fauna and Flora consider endangered.

The Philippine Wildlife Resources Conservation and Protection Act prohibits the hunting, selling, and killing, as well as collecting of eggs, of endangered species.

The local government has been promoting Sariaya as a “home of sea turtles.”

Most residents along the coast of Tayabas Bay in Quezon used to keep sea turtles as pets.

But Tanggol Kalikasan (TK), a Lucena-based public interest law office that advocates environmental protection, has been conducting a campaign to educate the public about environmental and wildlife protection laws.

Jay Lim, TK project officer, citing information from the Bureau of Fisheries and Aquatic Resources in Quezon, said the “baklad,” those numerous huge stationary fish traps at the bottom of Tayabas Bay and Lamon Bay, also pose a danger to marine creatures, which may get entangled to these traps.

Moreover, reef conditions had deteriorated due to dynamite and cyanide fishing, while mangrove forests along the coastline had been degraded or destroyed.