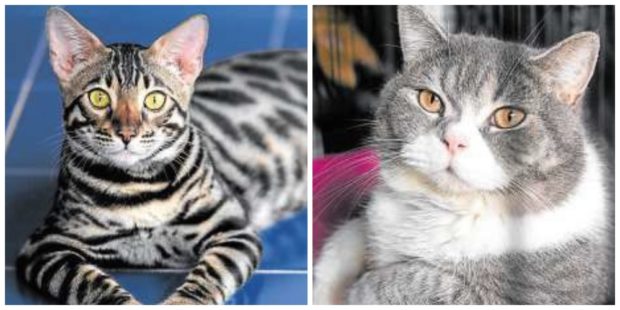 PRRRRIZED LOT The pedigree cats confiscated as live assets in a drug bust are pictured at an auction at an animal shelter in Rayong province, Thailand, on April 23. —REUTERS

RAYONG, Thailand — Pedigree cats confiscated by Thai police during a drug raid have found a home with a feline fanatic after being put up for auction.

All six pets, five of the Scottish Fold breed and one Bengal, were sold to Nutch Prasopsin, who runs a Facebook page followed by 3 million cat lovers, who helped her raise the 100,000 baht ($3,186) winning bid.

“I was very excited. I had very much hoped that the cats would end up in my care. I’ve been following their status since the very first day,” she told reporters.

The auction was held after a 30-day window expired for the owner, who remains at large, to come forward and claim the cats and prove they were not purchased with drug money.

The confiscated cats will share their new home with Nutch’s 20 other cats.

Pornthip Jampong of the regional narcotics control board said the cats had suffered an ordeal and it was important they be auctioned off as a group.

“They were living together so they would be familiar with each other,” she said. “If we separate them, this may cause them stress or have psychological effects.”

The money generated at the auction will be held by police as a seized asset.