Pantries prove giving can be this contagious 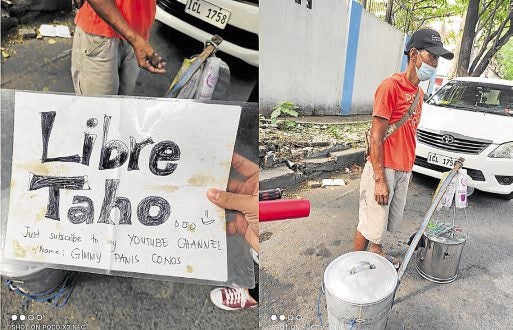 HIS TREAT Even “taho” vendor Gimmy Conos has felt the need to do his share. —PHOTO BY HELIOS/MARY AMOGUIS’TWITTER

People giving back or paying it forward. The poor helping the poor. Giving with nothing in exchange. Strangers building new friendships. Celebrity fans turning their clubs into aid networks. These are some of the stories that warm the heart and fortify the Filipinos’ faith in themselves which have emerged during this pandemic after a small bamboo cart of fresh produce, rice and a few canned goods rolled out the first community pantry that became a national phenomenon of sharing.

Critics of the government say the food aid movement shows the administration’s inability to help ordinary citizens who have to rely on each other to alleviate hunger. Some in government and their supporters see sinister motives behind the free food project, suspecting the hidden hand of communist rebels in setting up pantries all around the country.

Everyone agrees, however, that it is the right thing and the right time to do itʖGive what you can, take only what you need.

For 72-year-old jeepney driver Elmer Cordero, lending a hand to the organizers of the “Tulong Obrero” community pantry on Narra Street, Quezon City, was his way to give back for the aid he received last year.

Cordero and four other jeepney drivers were jailed for violating physical distancing during a protest against the ban on jeepneys in June 2020. He was grateful for the P10,000 raised for his bail.

Now all he could offer is to help man the community pantry and assist other volunteers distribute food to poor people like him, majority of them jeepney and tricycle drivers whose livelihood was badly hit by the ban on public transportation.

“What we’re doing is a big help to those in need, so I hope they won’t see the [community pantries] in a bad light,” he said, commenting on the Red-tagging of Ana Patricia Non, who started the first community pantry on Maginhawa Street in Quezon City.

At the Maginhawa Community Pantry, the first volunteers were tricycle drivers and vegetable vendors like Donnaville Pavillion, who is also a college student.

The 21-year-old has been multitasking for more than a week now—selling fruits and vegetables, attending online classes and volunteering at Maginhawa. Her “very understanding” teachers know that she is a volunteer pantry worker, she said.

Asked why she was eager to volunteer despite her busy schedule, Pavillion said: “I’m not sure why I’m doing this. But I know that it brings me joy when I’m able to reach out to people. Even when I’m tired, I feel relieved when they say thank you.”

The Maginhawa Community Pantry has moved from its original location on a sidewalk to the barangay hall of Teachers Village East. It is open from Monday to Saturday, from 7 a.m. to 12 p.m. Donations can be dropped off from 6 a.m. to 6 p.m. daily.

When “Mang Romeo” knocked on the gates of a school that had organized a community pantry in Tandang Sora, Quezon City, the staff thought that he was looking to get some food.

Their pantry was already closed for the day. But according to a Facebook post of Integrated Center for the Young (ICY), Mang Romeo had already received a few essential items from their community pantry and he just went back to hand over P46 in cash to give as his personal contribution.

“He said he wanted to help in any way he can, so he sold metal scraps and donated what little money he raised,” ICY said.

When the school staff saw Mang Romeo the following day, they handed him a bag of goods and some cash specifically for him from an anonymous donor.

The organizers of the community pantry at San Roque Cathedral in Caloocan City were complete strangers to each other, but they immediately bonded for the project. 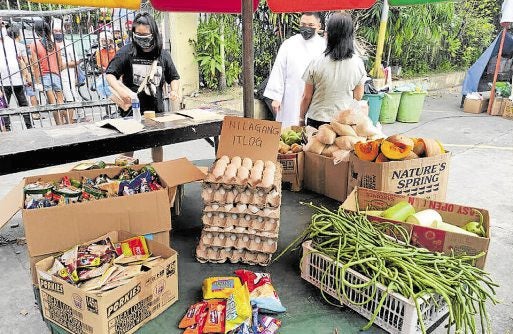 EARLY FOLLOWER Now into its second week, a community pantry set up at San Roque Cathedral in Caloocan City was one of the first to be inspired by Ana Patricia Non’s initiative in Quezon City. —RON FONTALIZA/CONTRIBUTOR

Ron Fontaliza, a teacher and one of the organizers, reached out to the Caloocan Young Leaders Initiative, which was also planning to start its own food pantry. Caloocan Bishop Virgilio David allowed them to use the church grounds for the community pantry, which now serves around 600 people daily.

“There are so many of our fellow Filipinos who are hungry. What we give away is not enough. Sometimes we run out of goods because of the sheer number of people in need,” he said.

On Piy Margal Street in Sampaloc, Manila, Christer Gaudiano and his wife had set up their own community pantry to help their neighbors who had lost their livelihoods, sharing what extra cash they had.

Donations in cash and in kind poured in not just from their family and friends but from total strangers.

“When we got to our stall, the first people we saw were not people lined up to get food, but to put canned goods and fruits to add on to what we had prepared,” Gaudiano said. “It fills our heart to see the bayanihan spirit.”

The couple’s pantry cater to jeepney and tricycle drivers, construction workers, vendors, beggars, the unemployed and those who were left in a pinch during the pandemic.

“This is really fandom power,” according to Andi Alcantara, one of the administrators of the fanbase. 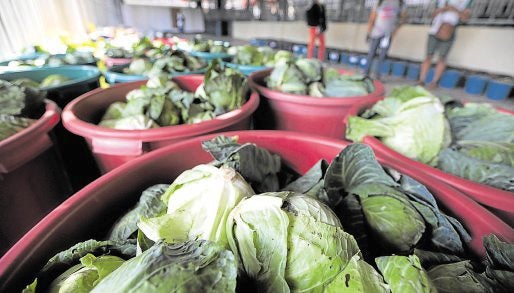 WHERE IT ALL STARTED Cash donations to the Maginhawa Community Pantry were used to buy these vegetables from farmers in Central Luzon. —NIÑO JESUS ORBETA

She said their project was inspired by the Maginhawa community pantry, as well as the charity works of Mew and Gulf back in Thailand.

The actors’ fan clubs in other countries, including those in Thailand, Taiwan and the United States, are asking how they could help.

“This is our way of giving back to our fellow Filipinos. Mew and Gulf always remind us to give back whenever we can,” she said, noting that their group had been doing charity work even before the pandemic hit.

At Barangay Panamitan in Kawit, Cavite province, a taho vendor who is known as “Kuya Nelson” offered free cups of his taho to a community pantry last Wednesday.

But the organizers could not see themselves shaving off some of Nelson’s earnings for the day and decided to buy 40 cups for P400 pesos. Nelson insisted on donating them, but they refused.

According to Project Starfish, a charity organization that set up the community pantry in Kawit, they had planned on buying only P250 worth of taho, but the vendor offered more cups for free.

“But we insisted to pay for all the cups, because we wanted him to go home earlier than usual,” the group said.

Others in the community chipped in to raise the P400.

A group of young professionals in Zamboanga City opened a community pantry at Santa Catalina village on Saturday for both Christian and Muslim residents in one of the city’s poorest villages.

According to group leader Chester Hans Tolentino, the mixed community has not yet fully recovered from the impact of the 2013 siege by Moro National Liberation Front members.

The Christians in the village are preparing to celebrate the Feast of St. Catherine of Siena while the Muslims are observing the holy month of Ramadan marked by daylong fasting which they break with a single meal at sundown

Roque Tapales, a disabled driver, said his contribution will be giving free rides on his motorcab on Monday, especially to construction workers and low-paid employees.

“I only have my motorcab, so this is my way of helping my fellow residents lighten their daily load in order to survive (this pandemic),” Tapales told the Inquirer

Grade 12 student Kyla Ursolino, 18, was so inspired by the Maginhawa community pantry that she urged her mother and her friends to put one in Lucena City.

“It was both an instinctive act and a proactive response of a community that understands the urgent need to help each other in this time of crisis,” explained Katherine Ursolino, Kyla’s mother.

The Lucena Community Pantry (LCP), one of about a dozen in the city, was formed by some of her friends, an artist group and a couple of local businesses. It has received a variety of food donations, including vegetables from local farmers.

On Saturday, a farmers group from nearby Sariaya town donated an assortment of fresh vegetables. The LCP mostly benefit tricycle drivers, construction workers and families of patients at the adjacent Quezon Medical Center.